Maryland Man Who Served on Presidential Helicopter Squadron as a Marine Pleads Guilty to Jan. 6 Felony 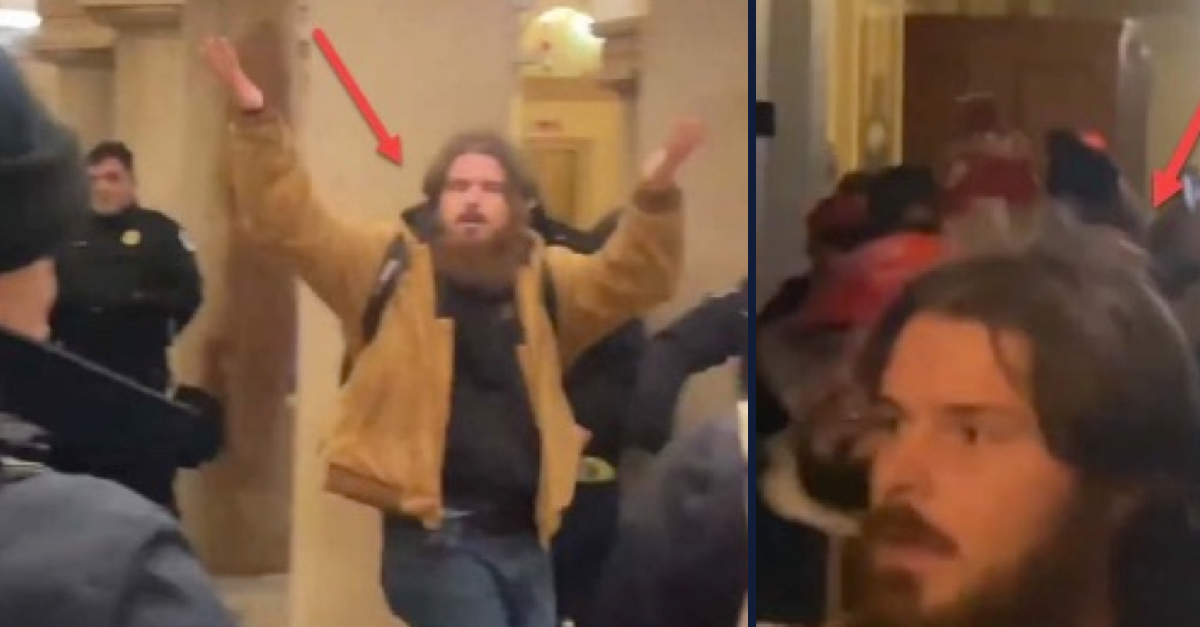 A military veteran who once served on the Marine One squadron has pleaded guilty to felony obstruction in the Jan. 6 attack on the U.S. Capitol.

John Daniel Andries, 36, admitted to traveling to Washington from his home in Maryland on Jan. 6 in order to attend then-President Donald Trump‘s so-called “Stop the Steal” rally, in which Trump encouraged his supporters to march to the Capitol as Congress was certifying Joe Biden’s 2020 electoral win. Andries admitted to entering the building through a broken window, confronting Capitol Police once inside, and refusing to leave Capitol grounds, forcing police to drag him away.

Andries entered his guilty plea before U.S. District Judge Rudolph Contreras on Monday. During the hearing, Assistant U.S. Attorney Douglas Collyer noted that Andries was in the first wave of rioters to breach the building at the Senate Wing door. He entered at around 2:15 p.m., just two minutes after the initial breach, and made his way to the Capitol Crypt.

Once there, Collyer said, Andries was part of a crowd that attempted to push past police officers. At one point, Andries approached police officers, getting to “within an inch” of them, according to prosecutors.

After the crowd in the Crypt successfully pushed past police, Andries made his way to the Speaker’s Lobby, where he took a video of himself.

“Hey y’all, think they hear us now?” Andries said on the video. “Knock knock, motherfuckers,” he also said, later adding: “I think the police have gotten the message: we ain’t backin’ down.”

As Andries appeared to prepare to exit the building, Collyer said, he saw a rioter in a scuffle with police, and intervened on the rioter’s behalf. He then left the building at around 3:00 p.m., where he made a second video.

“We made it to the Speaker’s Chambers,” Andries recorded himself saying. “I think we’re on the right side of history.”

Andries commented on the sound of an alarm he believed was coming from inside the building, and wondered if he was responsible.

“I don’t know if it was me or somebody else, but I know I tried to pull the fire alarm,” Andries said. “I wasn’t sure if I was successful, but I know somebody did it this time for sure. I hear it.”

Collyer then said that Andries refused to leave.

“Officers were forced to physically drag the defendant away from the Capitol building,” the prosecutor added.

The obstruction charge carries a potential 20 years behind bars and a fine up to $250,000. The plea agreement contemplates a sentence of 15 to 21 months, but Contreras is not bound by that suggestion. Andries has also agreed to pay $2,000 in restitution toward the estimated $2.7 million in damage to the Capitol.

Andries’ legal troubles didn’t end at the Capitol. In February of this year, he was arrested for disorderly conduct and assault following a confrontation at a bar St. Mary’s County. According to police reports, security at the Action Billiards Bar and Lounge was trying to escort Andries out of the bar after he pulled a woman’s hair. Andries was resisting, and continued to do so after police arrived.

“The suspect refused to allow us to take him to our patrol vehicle, and he sat down on the ground, forcing us to pick him up and carry him to our patrol vehicle,” the police report said of an exchange similar to the way Andries had been removed from Capitol grounds more than a year earlier. Police officers used a stun gun on Andries multiple times in repeated attempts to get him to comply.

Maryland court records indicate that Andries pleaded guilty in May to a misdemeanor charge of resisting or interfering with arrest and that he received a suspended sentence of 180 days in jail.

At the start of Monday’s hearing, Andries had told Contreras that he had sought treatment for alcoholism as of “a couple of months ago,” but the Maryland charges were not otherwise discussed.

The federal complaint notes that Andries is a military veteran. According to the Washington Post, he once served as a crew chief for the presidential helicopter squadron, having joined the Marine Helicopter Squadron One in 2006. He enlisted in the Marine Corps in 2004.

Andries’ role in the squadron covered the presidential administrations of George W. Bush and Barack Obama, the Washington Post reported, noting that members of the team must receive top-secret clearance and a higher-level clearance known as Yankee White, which is reserved for personnel close to the president.