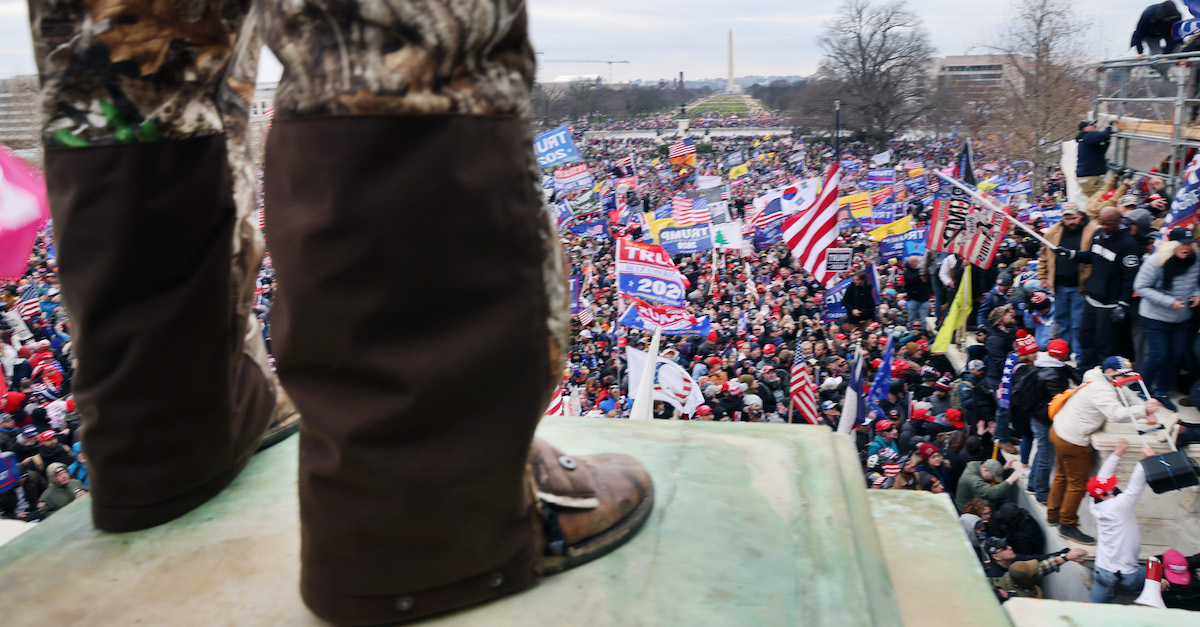 A Pennsylvania man who travelled to Washington on Jan. 6 with a friend who claimed not to know the man’s last name has pleaded guilty to breaching the Capitol building.

Carson Lucard, 27, admitted to Chief U.S. District Judge Beryl Howell on Friday that he entered the Capitol unlawfully and without permission as scores of Donald Trump supporters forced their way inside in an attempt to stop Congress from certifying Joe Biden’s 2020 presidential win.

Lucard pleaded guilty Friday to a single charge of demonstrating, parading, and picketing in the Capitol.

Purusant to the plea, Lucard admitted that he entered the Capitol building twice. He first came in around 2:50 p.m., more than 30 minutes after the building was initially breached, through a broken window at the Senate Wing door. Once inside, he lingered in the foyer and yelled and chanted at police officers who guarded the area before leaving at around 3:05 p.m.

Two minutes later, he came back in, this time with his friend Brian Stenz, 51. Lucard acknowledged that he and Stenz walked past broken glass and an overturned cabinet before entering the office of Sen. Jeff Merkley (D-Ore.), who later shared video of the damage done by the throngs of people that day.

Lucard then went to the Capitol crypt and posed for a selfie with Stenz.

He also acknowledged that he travelled from Pennsylvania with Stenz, who pleaded guilty in November to the same parading and picketing charge to which Lucard pleaded guilty on Friday.

In identifying Stenz as the person with whom he travelled to Washington, Lucard solved at least one Jan. 6-related mystery before Howell, who in February sentenced Stenz to jail, home confinement, and probation for storming the Capitol.

Lucard was a topic of discussion at Stenz’s hearing, although he was not identified by name. Stenz had told investigators that he travelled from Pennsylvania on Jan. 6, attended Trump’s “Stop the Steal” rally, joined the mob at the Capitol, unlawfully entered the Capitol building, went inside Merkley’s office with a friend of his daughter’s, and took a selfie with that friend while in the crypt. However, he said he did not know the friend’s last name.

Howell didn’t quite believe Stenz; she said she was “very skeptical” that Stenz was truthful with the FBI when he said he only knew the friend’s first name.

Stenz said all he knew about his daughter’s friend was that he was, in Stenz’s words, a “big Trump guy” in his 20s.

In outlining Lucard’s potential punishment, Howell raised the issue of “split sentences” in Jan. 6 cases. That’s where defendants have pleaded guilty to the parading and picketing charge — which itself is classified as a petty offense. Prosecutors have argued that judges should issue sentences of both jail time and probation, while defense attorneys have said that federal sentencing and probation laws allow one or the other, but not both. So far, judges in the D.C. district have not reached a consensus on the legal matter at issue.