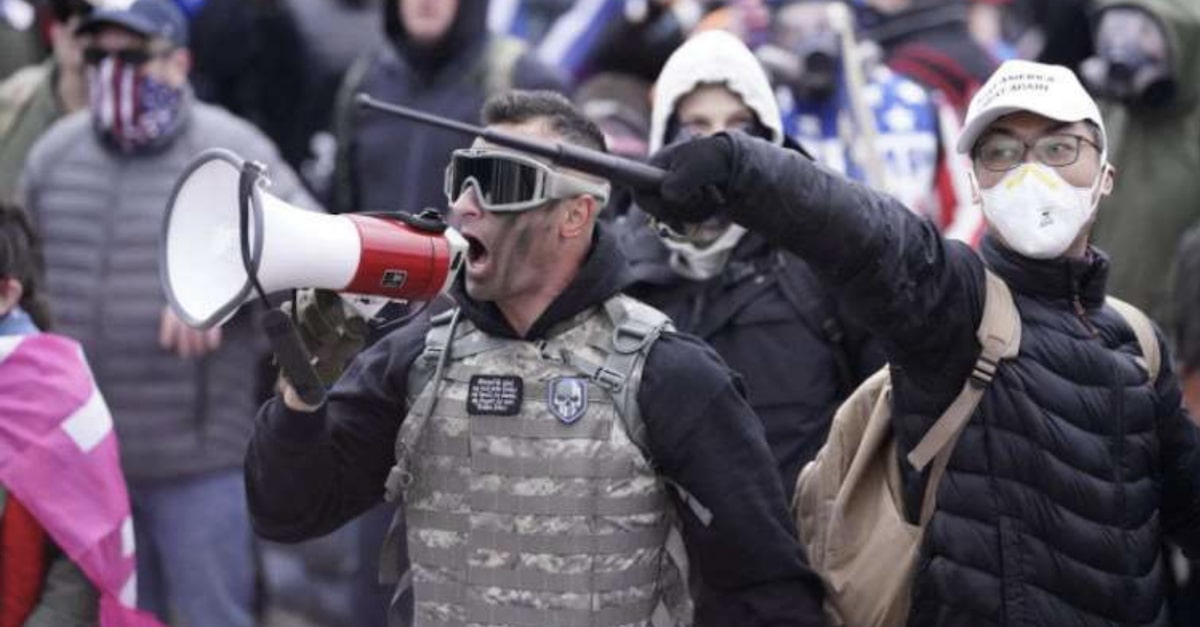 The man branded #FacePaintBlowhard by online sleuths known for locating participants in the Jan. 6th siege of the U.S. Capitol must remain behind bars pending his trial for allegedly assaulting law enforcement, a federal judge ruled.

Prosecutors announced the arrest of 35-year-old Samuel Lazar on July 27, the day of the debut hearing of the House Select Committee to Investigate the Jan. 6th Attack on the U.S. Capitol. That long-anticipated congressional hearing featured testimony from police officers assaulted on the day of the siege. Prosecutors accused Lazar of dousing police with chemical spray.

“They maced us, those tyrannical pieces of shit, and we maced them right the fuck back and now they’re taking the building,” Lazar is quoted saying in a video cited in an FBI affidavit.

Seen clad in a camouflaged tactical vest, black hooded sweatshirt, and blue jeans, Lazar had a patch over his chest with the words: “Blessed be the Lord, my rock, who trains my hands for war, and my fingers for battle,” according to the complaint. The online collective Sedition Hunters gave Lazar his memorable nickname.

Prosecutors say that Lazar referred to that patch in his video rant.

“They attacked the people. We have a right to defend ourselves. Fuck the tyrants. There’s a time for peace and there’s a time for war,” Lazar said while pointing at the patch, according to an FBI affidavit.

Meriweather found that Lazar was charged with felonies and said that his gear and chemical spray signaled advanced planning.

Justice Department attorney Douglas Collyer told the judge that Lazar had a pattern of “escalating criminal behavior,” starting with the petty offenses of his youth that prosecutors itemized in a legal brief requesting his detention.

Prosecutors say that Lazar’s “multiple prior misdemeanor convictions” include a 2004 conviction for criminal mischief, which earned him a time-served sentence of 23 months in jail. In 2010, Lazar was denied an attempt to purchase a firearm, and he was convicted some six years later for lying on the Department of Justice, Bureau of Alcohol, Tobacco, Firearms and Explosives Form 4473 in an attempt to obtain a firearm again at a gun show, according to the government.

Before Jan. 6th, Lazar “loved” a post on Facebook encouraging people to “Arm up,” “March to D.C.,” and threatened a range of left-leaning collectives, such as anti-fascists, Black Lives Matter activists, and Democrats, Collyer said.

Though Lazar did not draw up the meme, the prosecutor said, the accused Jan. 6th participant signaled his approval by screenshot-ing, circling, and pointing to it with an arrow.

“What’s next if the defendant is released?” Collyer said.

Lazar’s lawyer David Benowitz played down the allegations, saying the criminal mischief conviction occurred when his client was 18 to 19 years old.

As for the threatening Facebook message, Benowitz said: “He didn’t write the post. He certainly didn’t create this meme.”

Judge Meriweather found the post alarming, noting that it signaled his belief that “individuals should rise up and come armed.” She cited that post as one of the reasons she found Lazar posed an “ongoing danger” to the community.

Lazar’s counsel indicated that the defense plans to appeal.

(Photo from the FBI affidavit)