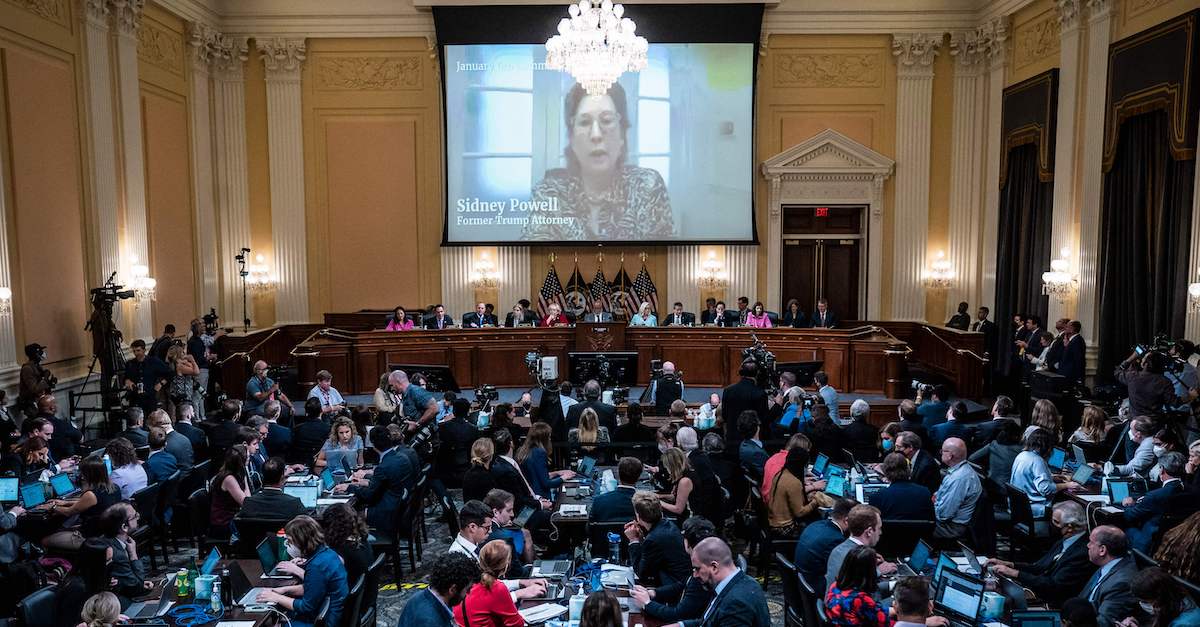 A video of former President Donald Trump attorney Sidney Powell speaking is shown on a screen as the House select committee tasked with investigating the January 6th attack on the Capitol hold a hearing on Capitol Hill on June 13, 2022 in Washington, D.C.

After learning from Mother Jones and BuzzFeed about the reported tie between Powell and the Oath Keepers, prosecutors raised concerns that about whether their defense attorneys have complied with D.C. Rule of Professional Conduct 1.8(e), the regulations that prohibit conflicts of interest. The Jan. 6th Committee’s hearing described Powell as one of Trump’s former attorneys, and the initial hearing suggested a connection between the 45th president and the group.

“The government is filing this motion because it has an interest and an obligation to ensure it represents its client, the United States, competently (D.C. Rule 1.1) and diligently (D.C. Rule 1.3),” Assistant U.S. Attorney Jeffrey Nestler wrote in a five-page motion for an inquiry. “Those duties include raising potential conflicts with the Court as they arise, ensuring that defendants and third parties are adequately advised of their rights, and protecting the record by involving the Court in the process of addressing a potential conflict before it undermines a proceeding and a defendant’s right to competent and conflict-free representation.”

The government says that this inquiry may require a court reviewing the third-party fee-arrangement agreement.

“The Court may similarly need to conduct a colloquy with the lawyer and client to determine whether the client was sufficiently apprised of the nature of the conflict,” the motion states.

The inquiry would reach more than a dozen Oath Keepers members prosecuted in connection to the Jan. 6 attack on the U.S. Capitol, including the group’s leader Stewart Rhodes. At least three of the 11 Oath Keepers members and leaders charged with seditious conspiracy have pleaded guilty to that top count. Rhodes pleaded not guilty, and other defendants have been charged with lesser offenses.

Julia Haller, who was Powell’s co-counsel in the so-called “Kraken” litigation, represents husband-and-wife Oath Keepers members Kelly Meggs and Connie Meggs. Haller asserted that she was in compliance with ethics rules but declined to state whether she received funding from Defending the Republic.

Powell claimed the group is a 501(c)4, a type of entity often described as a “dark money group” because of its lax disclosure laws. The Washington Post reported that it made $17 million as of Dec. 6, 2021, peddling lies about the 2020 election.

She has been fighting to keep her law license ever since a federal judge in Michigan sanctioned her and referred her for an investigation and possible suspension or disbarment in connection with her efforts to overturn Joe Biden’s victory. The State Bar of Texas subsequently filed an ethics case.

According to former federal prosecutor Mitchell Epner, the government’s motion could add to Powell’s legal jeopardy — depending on what the inquiry finds.

“If Powell’s organization is, in fact, funding some of the defendants’ legal fees, that would be an ethical issue for the attorney who received the funding,” said Epner, a partner at Rottenberg Lipman Rich, PC. “With informed consent, such arrangements are kosher.”

“If Powell’s organization is NOT actually funding defense counsel, then Powell would potentially have criminal exposure for mail and/or wire fraud,” Epner added. “That exposure would depend, in part, on the specificity of the representations in the solicitation(s).”

Powell did not immediately respond to Law&Crime’s email requesting comment.