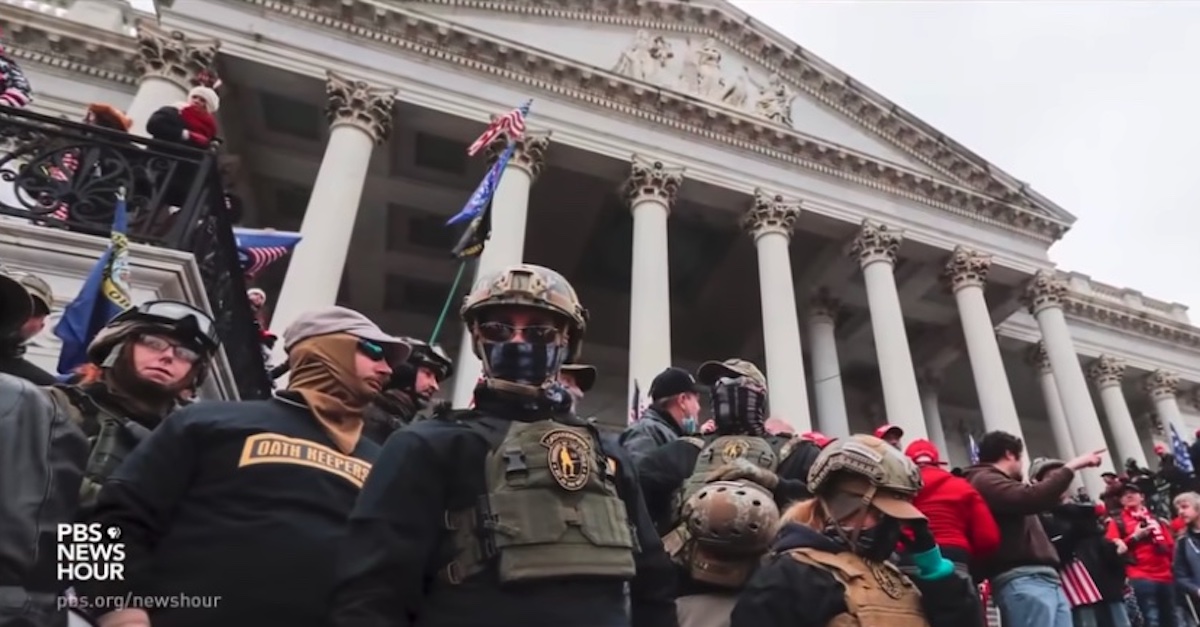 People wearing clothing with “Oath Keepers” labels are seen outside the Capitol on Jan. 6. (via YouTube screengrab/PBS NewsHour)

A third member of the right-wing Oath Keepers militia group has pleaded guilty to seditious conspiracy in connection with the Jan. 6 attack on the U.S. Capitol.

William Todd Wilson, 44, “did knowingly conspire, confederate, and agree, with other persons known and unknown to the Grand Jury, by force to prevent, hinder, and delay the execution of any law of the United States,” court documents allege.

Wilson has also pleaded guilty to obstruction of an official proceeding. Both charges are felonies that carry potential prison sentences of up to 20 years each, but the plea agreement estimates that he will be sentenced to somewhere between just over five years to six years and six months. The agreement also says Wilson must fully cooperate in the government’s investigation.

Prosecutors say that Wilson conspired with Stewart Rhodes, the founder and leader of the Oath Keepers, to “stop the lawful transfer of presidential power by January 20, 2021, which included multiple ways to deploy force.”

Wilson has not been previously named as a defendant in any of the Jan. 6 Oath Keepers cases. Rhodes was indicted in January on the first seditious conspiracy charges in the governments wide-reaching prosecution of those who participated in the Jan. 6 attack on the Capitol. Thousands of Donald Trump supporters, angry about Joe Biden’s win in the 2020 presidential election, overran police and swarmed the building, forcing legislators and staffers, who had just begun to certify the election results, to evacuate or shelter in place until the building was cleared.

Little is known about Wilson. Prosecutors say that he is a “military and law enforcement veteran” and has been a member of the Oath Keepers since 2016.

Prosecutors describe the Oath Keepers as a “large but loosely organized collection of individuals” that recruits former military, law enforcement, and first responders who take a sworn oath to defend the Constitution “from all enemies, foreign and domestic.” The Oath Keepers website says members of the group “will not obey unconstitutional orders,” and the group has been described as having “anti-government extremist” views. Prosecutors say that Wilson is a “county leader” of the group in North Carolina.

“Some members of the Oath Keepers, like Wilson, believe that the federal government has been coopted by a cabal of elites actively trying to strip American citizens of their rights,” prosecutors say in the Statement of Offense—a court document outlining the facts that form the basis of the charges to Wilson is pleading guilty—filed Wednesday.

Wilson was accused of joining a plot allegedly led by Rhodes, 55, who has also been charged with seditious conspiracy, obstruction, and a host of other felonies and misdemeanors in connection with the Jan. 6 siege.

“Wilson agreed to take part in a plan developed by Rhodes and others, including regional leaders, to stop the lawful transfer of presidential power by January 20, 2021, by deploying force to prevent, hinder, and delay the execution of the laws of the United States governing the transfer of presidential power, the Statement of Offense says. “They used encrypted and private communications, equipped themselves with a variety of weapons, donned combat and tactical gear, and were prepared to answer Rhodes’s call to take up arms. Wilson and others amassed firearms on the outskirts of Washington, D.C.—some distributed across hotels and ‘quick reaction force’ (‘QRF’) teams—and planned, if called upon, to use them m support of the plan were prepared to halt the lawful transfer of presidential power.”

The reference to the QRF appears to link Wilson to another Oath Keepers defendant, Edward Vallejo, who is accused of standing by with an array of weapons for his alleged co-conspirators and readying them to cross the Potomac by boat to storm the Capitol building if directed to do so.

Wilson acknowledged that his participation dates back to November 2020, when he joined a “Leadership Intel Chat” with Rhodes and others that were allegedly dedicated to planning ways to stop Congress from certifying the election results.

“On November 5, 2020—two days after the Presidential Election—Rhodes urged members of the ‘Leadership Intel Chat,’ which included Wilson, to reject the presidential election result and stated, ‘We aren’t getting through this without a civil war. Too late for that. Prepare your mind, body, spirit,'” the Statement of Offense says.

“Based on Rhodes’s directive, on January 5, Wilson drove himself from North Carolina to the Washington, D.C. Metropolitan Area,” the document also says. “Wilson brought with him on the trip an AR-15-style rifle, a 9 millimeter pistol, approximately 200 rounds of ammunition, body armor, a camouflaged combat uniform, pepper spray, a large walking stick intended for use as a weapon, and a pocketknife.”

Wilson admitted that he took cell phone video of one of the two “stacks” of Oath Keeper members that took a forceful, military-style approach to the Capitol that day. He also acknowledged to entering the Capitol itself, following closely behind alleged co-conspirators Kelly Meggs and Caleb Berry. Meggs is a co-defendant in the case against Rhodes; Berry pleaded guilty in July 2021 to conspiracy and obstruction charges.

Joshua James was the first to strike a deal with the government, pleading guilty in March to seditious conspiracy and agreeing to “fully cooperate” with the prosecution.

Brian Ulrich pleaded guilty to seditious conspiracy at the end of April. His plea also includes a cooperation provision.

Read the plea agreement and statement of offense, below.