Federal Judge Questions Prosecutor About ‘Sweetheart’ Plea Deals Before Sentencing Man Who Lit Up a Joint Inside Capitol on Jan. 6 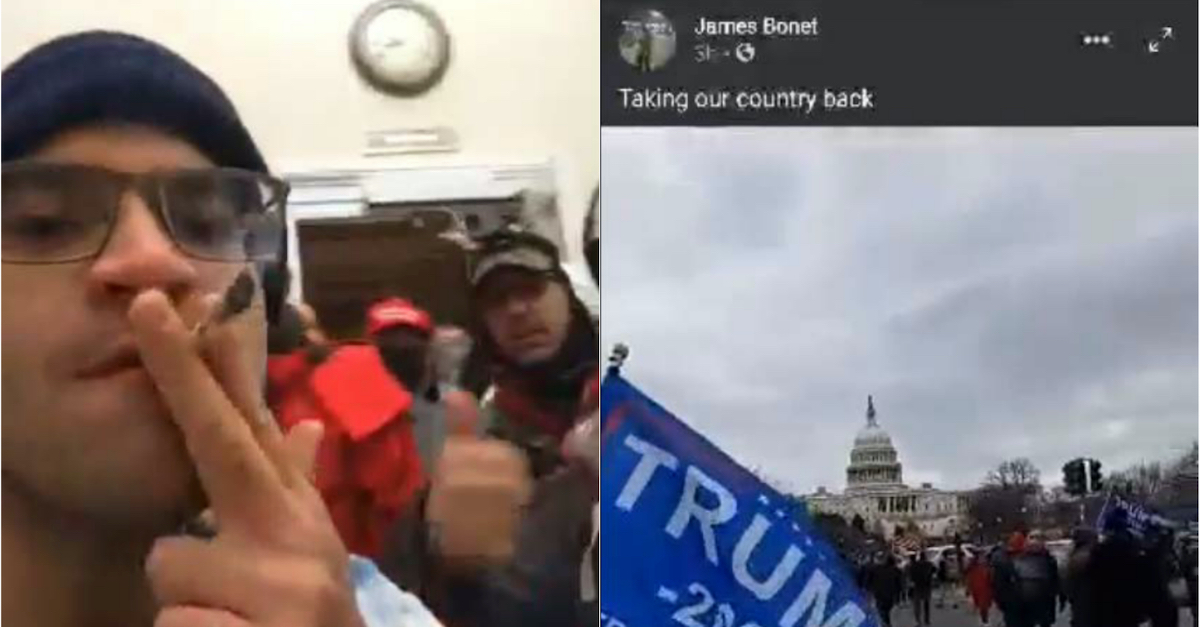 A New York man who recorded himself smoking a joint in a senator’s office after breaching the Capitol building on Jan. 6 will have to spend 90 days behind bars.

James Bonet, 30, pleaded guilty in October to entering and remaining inside the U.S. Capitol, a misdemeanor charge that carries a potential one-year jail sentence.

He admitted that he had joined the mob of Donald Trump supporters who stormed the Capitol as Congress attempted to certify Joe Biden’s win in the 2020 presidential election.

Once inside the building, Bonet made his way to the office of Sen. Jeff Merkley (D-Ore.), where he recorded himself smoking a marijuana cigarette. He posted that video to Facebook with the caption “Smoking at the capital [sic] building.”

Senior U.S. District Judge Emmet Sullivan’s sentence goes beyond the 45 days requested by prosecutors. Bonet had asked for a sentence of probation only.

In addition to three months in jail, Bonet will have to serve one year of supervised release. Sullivan ordered Bonet to complete 200 hours of community service during that time, or face going back to jail.

“No Reasonable Person Would Do That”

At Wednesday’s hearing, Assistant U.S. Attorney Alexis Loeb said that Bonet was not “just some guy goofing off” at the Capitol on Jan. 6.

“It shows a certain callousness to smoke a joint and film yourself while members of Congress and their staff have evacuated and are in hiding,” Loeb said. “[It’s] more than callousness. It’s a show of power. Showing ‘we have taken control here’ … ‘I can go into a senator’s private space and can light up a joint and can broadcast it so everyone can see what I’m doing.'”

Loeb also drew Sullivan’s attention to an interview Bonet gave to a local TV news station in January, one year after the siege. In that interview, Bonet said his time at the Capitol was “my peaceful protest,” and repeated the discredited claim that police merely let him and others into the building.

According to that interview, Bonet still has doubts about the legitimacy of the 2020 presidential election, despite the fact that no widespread voter fraud has been found.

“Our recommendation is driven primarily by the seriousness of the offense itself,” Loeb said, adding that the government already doubted Bonet’s expressions of remorse. Loeb did say that the interview did amount to a “compelling” reason for why incarceration was warranted.

Sullivan, a Bill Clinton appointee, said that he was “floored” by Bonet’s comments in the interview and that the government “would have been well within its rights” to ask for more time behind bars.

“No reasonable person would have done that,” Sullivan added.

Bonet’s lawyer, Lisa Peebles, said that her client shouldn’t be punished for the “flat affect” in his voice that gave the impression that he wasn’t remorseful.

Despite Peebles’ insistence that Bonet did regret his actions, Sullivan didn’t believe it.

“Actions speak louder than words,” Sullivan said. “I’m going to consider his behavior on that day and in January 2022.”

“His conduct on Jan. 6, coupled with his comments a year later, after he’s had a year to reflect on his conduct, persuade the Court that he’s not truly accepting responsibility,” Sullivan said.

Noting that Bonet is currently in school, Sullivan said that he didn’t have to report to jail before June 1 so that he could finish his current semester.

“A Lot of These Deals Are Sweetheart Deals”

Before reaching the sentencing part of the hearing, Sullivan raised the question of whether the dozens of misdemeanor pleas among Jan. 6 defendants were sending the wrong message.

“What would you say, counsel, to those who would say that the plea extended to Mr. Bonet is another form of a sweetheart deal?” Sullivan asked Loeb. “[He] could have been charged with more serious offenses for the anti-American conduct that occurred on Jan. 6.”

Loeb said that Bonet, like other Jan. 6 defendants, was indicted on a felony obstruction charge, which carries a potential 20-year jail sentence (though, in practice, no one convicted of the charge has faced a sentencing that severe).

In what may have been a reference to GOP claims about the so-called “persecution of ordinary citizens engaged in legitimate political discourse” and “normal tourist visit[s],” Sullivan wondered whether prosecutors had an answer for people — members of the court included — who have expressed concerns about Jan. 6 defendants being punished too lightly.

The judge said that he wasn’t asking for details into how the government arrived at its prosecutorial decisions, but noted that “there are naysayers among the court and among the public who say that a lot of these deals are sweetheart deals.”

Sullivan’s concerns echoed those of two other judges in D.C. who have made similar statements at sentencing. In February, Chief U.S. District Judge Beryl Howell sharply questioned prosecutors for the decision to pursue the misdemeanor charge of parading, demonstrating, or picketing in the Capitol for people who participated in the riot, and the subsequent allowance of pleas to that charge, saying it was more akin to a “ticket” given to people who interrupt meetings.

U.S. District Judge Amy Berman Jackson has also said that “it needs to be clear” that the Jan. 6 attack on the Capitol “is not legitimate discourse.”