‘F***ed Up Nancy Office’: Oath Keepers Member Allegedly Tapped by Stewart Rhodes as ‘Operations Leader’ for Jan. 6 Has Been Indicted 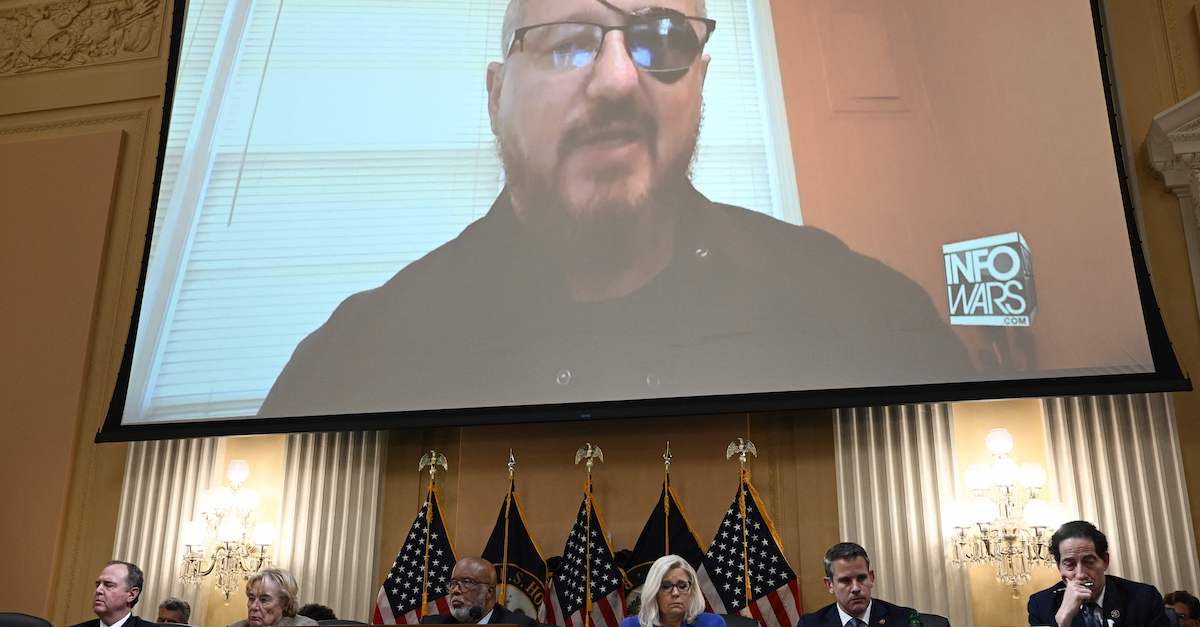 Stewart Rhodes, founder of the Oath Keepers, is seen on a screen during a House Select Committee hearing to Investigate the January 6th Attack on the U.S. Capitol on June 9, 2022.

An Oath Keepers member allegedly handpicked by Stewart Rhodes as “operations leader” for the extremist group during the Jan. 6 attack on the U.S. Capitol has been arrested and indicted, federal authorities revealed on Friday.

Prosecutors say that 39-year-old Michael Greene of Indianapolis played a key role in the attack on the U.S. Capitol, in an indictment charging him with five crimes. Unlike Rhodes, Greene has not been charged with seditious conspiracy.

Long shielded in court documents as “Person 10,” Greene — who also goes by the names Michael Simmons, “Mike Whip” and “Whiplash” — was first unmasked by Mother Jones in July 2021. Greene, who is Black, told reporters that Rhodes expelled racists from the Oath Keepers.

“The reputation of militias is a bunch of racist White guys,” he told the Washington Post. “Some of them are, but not all of them.”

“Greene, Rhodes and others made plans to bring weapons to the area to support the operation,” the unsealed indictment states. “They then traveled across the country to the Washington, D.C., metropolitan area in early January 2021.”

Once in Washington, D.C., Greene was reportedly assigned as a bodyguard to Donald Trump ally Roger Stone, and the two were pictured together by an Associated Press photographer on Jan. 5. In the days before the siege, prosecutors say, Greene and others transported firearms to the Washington, D.C. area.

Prosecutors previously alleged that the Oath Keepers planned for a so-called “quick reaction force,” or QRF, to be ready to deploy from the Comfort Inn Ballston, and ferry weapons over the Potomac River if Trump gave the command. They never did, but authorities claim that the hotel’s security footage showed their preparations.

On the day of the siege, the indictment says, Greene sent a text message to an acquaintance at 1:42 p.m. Eastern Time, stating, “Storming the capital [sic],” along with a photograph of the advancing mob.

At 3:08 p.m., Greene allegedly told an acquaintance “There in” and “Fucked up Nancy office,” in a text massage.

Numerous Jan. 6-related cases show House Speaker Nancy Pelosi (D-Calif.) having her office targeted and ransacked by rioters. One of them, Richard “Bigo” Barnett, allegedly left her a note with a sexist slur and was pictured kicking up his foot on her desk with a stun gun at his side. A mother and son were accused of facilitating the theft of a laptop from her office. Others took a nameplate and a podium as trophies.

Greene’s indictment leaves few clues as to what, if any, his role was in the melee inside the office of the California Democratic leader, beyond sending that text message.

Prosecutors accuse Greene of engaging in a cover-up.

“Sometime on or after Jan. 6, 2021, Greene deleted from his cellular telephone certain media, files, and communications that showed his involvement in the conduct alleged herein,” the indictment states, under the tampering count.

Greene is expected to have an initial court appearance on Friday in the Southern District of Indiana.