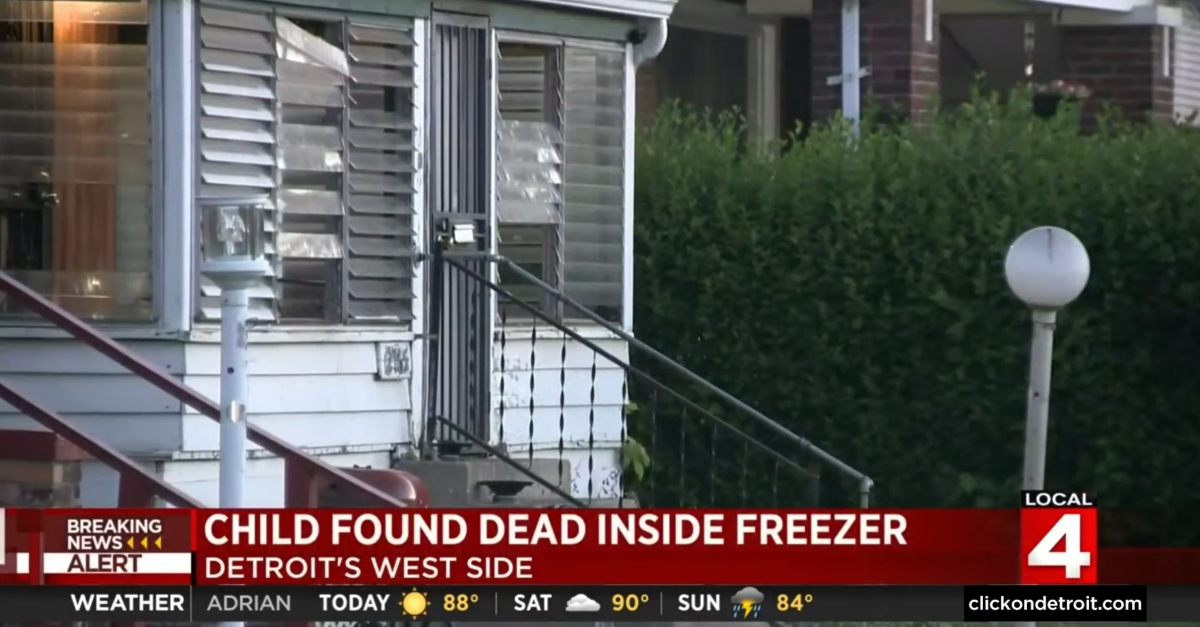 A 3-year-old boy was found dead in a basement freezer on Friday, according to police in Detroit, Michigan. Officers said they took a 30-year-old woman into custody. They did not immediately announce charges, though they later identified her as the mother.

This happened at a home in the west side of Detroit on Monte Vista Street, according to WDIV.

Officers did not immediately name the boy or the woman. It is unclear how the child died, and how long he remained in the freezer, police said in a press conference on Friday.

Police said they were called out there at about 1 a.m. on Friday. Evidence technicians arrived at the scene, according to WDIV.

Officers had been called out there regarding a welfare check, according to WJBK.

In a press conference update, Detroit Police Chief James E. White told reporters that police responded to the home on a welfare check. He credited officers for using their intuition.  They realized something was not right when they were speaking to the “occupant” of the home, and the way she was communicating with them.

White, who said he did not want to go into too many details on this matter in order to protect the prosecution’s case, characterized the woman as trying to get officers away as if nothing was going on. Ultimately, police say they discovered the child dead and decomposing in a basement freezer.

Next-door neighbor Marsha Dial told WWJ 950 reporter Ryan H. Marshall she lived there since 1998, but she did not know the family, though she would say hello to the children playing outside.

Marshall brought up that another neighbor said there were four or five children at the home in question. Dial agreed.

There were five other children in the home, White told reporters Friday. It is unclear if they knew about the child in the basement. They still have to speak to a psychologist, Capt. Kimberly Blackwell said. White described the home as being in poor condition, and said there was concern for the children based on what was seen inside.

They would ride their bikes, Dial told Marshalls.

“No,” she said, when asked if they were abused. “They were fine. They would ride their bikes, and they knew when I brought my dog out—I guess they taught them don’t go past the bushes when a dog is out because I have a pit.”

Marsha Dial lives next door to the house where Detroit Police made a welfare check this morning and discovered a 3-year-old boy found dead in a basement freezer.

Marsha has lived in her house since 1998 and says it shocked her that DPD detectives knocked on her door. @WWJ950 pic.twitter.com/MEHL4L3VU1

A neighbor, describing being “horrified” as a mother of a 3-year-old and other children, said a man also lived at the residence in question.

.@WWJ950 spoke to a neighbor that lives across the street. She says there’s also a man who lives in that house along with 4 or 5 kids which includes the 3-year-old boy found dead in a freezer.

She was horrified to learn the news as she has kids in her including a 3-year-old. pic.twitter.com/AyPQzOlsF4

When asked about this man, White said investigators are looking at everything, including video and interviewing neighbors. He declined to speak about the mother’s criminal history, when asked about it.