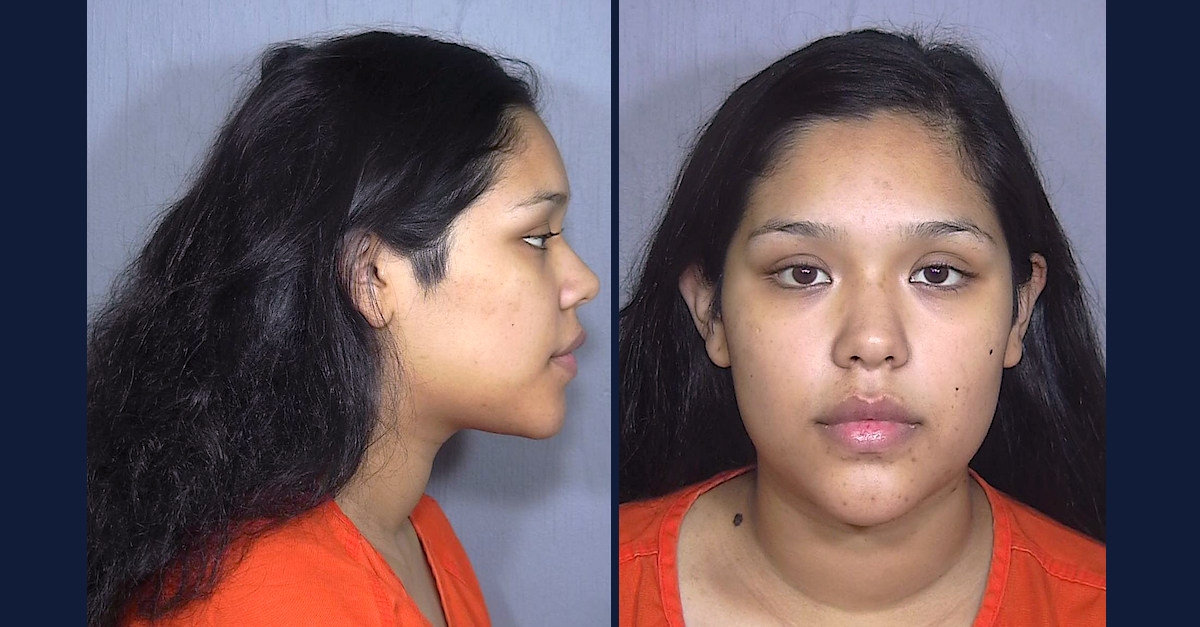 Colorado authorities on Wednesday released two jailhouse mugshots of a teen girl accused of murdering her newborn baby by stabbing the infant to death with a pair of scissors.

According to a law enforcement affidavit, Cepeda, who is from Texas, was 17 when she gave birth to her baby in the early morning hours on Wednesday, June 8 in Nunn, Colorado, a tiny city of a little more than 400 people about 20 minutes south of the Wyoming border and about an hour and a half north of downtown Denver.

Cepeda turned 18 on Friday, June 10, according to the affidavit.  She is charged as an adult.

The affidavit says Cepeda was out shopping with relatives when she started to feel ill. Cepeda later claimed she had no idea she was pregnant, but her mother told her that she looked like she was in labor at one point during the day. Cepeda allegedly went home, cloistered herself in a room, and surrounded herself with pillows. As the night wore on, relatives didn’t hear a sound.

A witness named Joseph Segura, who was allegedly present in the home where the birth occurred, found a trail of blood leading to a bathroom at 2:30 a.m., according to law enforcement. Relatives quickly realized that Cepeda had given birth; one witness allegedly saw a “little knee” and a bent leg in the room where Cepeda had been staying. Witnesses alleged that the dead infant was “pale.”

Those present called 911; the authorities took Cepeda to the hospital for treatment. Police searched the house and found the infant’s body with “what appeared to be stab wounds to the torso and chest.” Also present and taken into evidence were a pair of bloodied scissors.

After receiving medical treatment, Cepeda allegedly gave a detailed account of the birth of the child from the hospital. As Law&Crime previously reported:

Cepeda said she “tried to grab” the baby’s head during the birthing process and “tried to pull her out, but that didn’t work.”  She asserted that the baby “fell out” of her when she “stood up” after squatting during the process.  The umbilical cord allegedly broke when Cepeda stood up.  The baby “wasn’t moving on her own” and “wasn’t crying,” the defendant said; she also said she “couldn’t” bring herself to pick the baby up and therefore “left her on the floor,” according to the police affidavit. Cepeda then allegedly claimed that she “thought” the baby “might” be okay if she “gave her some time,” so she went to take a shower and planned to come back later.

Cepeda said she used the scissors to cut the remaining part of the umbilical cord, according to the affidavit. She allegedly denied hurting the baby and asserted that the infant was not born alive.

She also allegedly asserted that the scissors were never near the baby.

“[A]re you sure?” a police officer asked upon hearing that assertion, according to the affidavit. “I need to know what happened.”

“[N]o,” the defendant allegedly replied, again according to the affidavit. “[T]here is no reason for the baby to have any cuts.”

“I didn’t do it,” the defendant also allegedly said when she was told by the police that the baby’s body showed “significant wounds.”

The affidavit says the defendant didn’t change her story when the police pressed further. She allegedly continued to say that she “didn’t know” who could have stabbed the baby.

“I couldn’t have done that to the baby,” the defendant continued, according to the affidavit. “I was bleeding.  I cut the umbilical cord on me and didn’t touch the one on her, that’s all I used [the scissors] for.”

Eventually, the defendant said she “couldn’t be a mom” and “couldn’t tell her mom” that she was pregnant, the affidavit says. But then, when asked “why she would do this,” Cepeda allegedly said “it wasn’t moving.”

The questioning officers seized on that line.

“[I]f the baby wasn’t moving, why would you take the scissors and do this?” the police asked, again per the affidavit. “Was this going to help the situation?”

“I don’t know,” the defendant is said to have continued when asked “why she would do this with the scissors.”

The officers then the defendant to help them understand how the baby suffered the stab wounds.

When the police asked Cepeda “how many times she stuck the scissors into her baby,” the defendant’s mother requested an attorney, and the police stopped asking questions, according to the affidavit.

Dr. Michael Burson, the Weld County Coroner, said that it was his opinion that the baby was born alive, the police wrote in the affidavit. Burson cited blood in the newborn’s chest cavity and bruising around the wounds as evidence to support that assertion, the affidavit says. Burson opined that the baby was born alive and died from “multiple sharp force injuries,” the document adds.

Cepeda is charged with alleged violations of Colo. Rev. Stats. §§ 18-3-102(1)(f) and 18-3-102(1)(a), respectively. The charges are separate legal theories by which prosecutors hope reach a conviction; there is only one alleged victim.

The Weld County District Attorney’s Office said on June 10 that Cepeda remained in the hospital as of that date.  According to online records, she was booked into the Weld County Jail on Monday at 11:46 a.m. Central time.

The case against Cepeda is number D622022CR959 in Weld County, Colorado. She’s scheduled to appear on July 8, 2022, for a virtual motions hearing.

Some of the case file and the DA’s press release are below: