D.C. Resident Who Attacked Police with a Pole During Jan. 6 Brawl Pleads Guilty 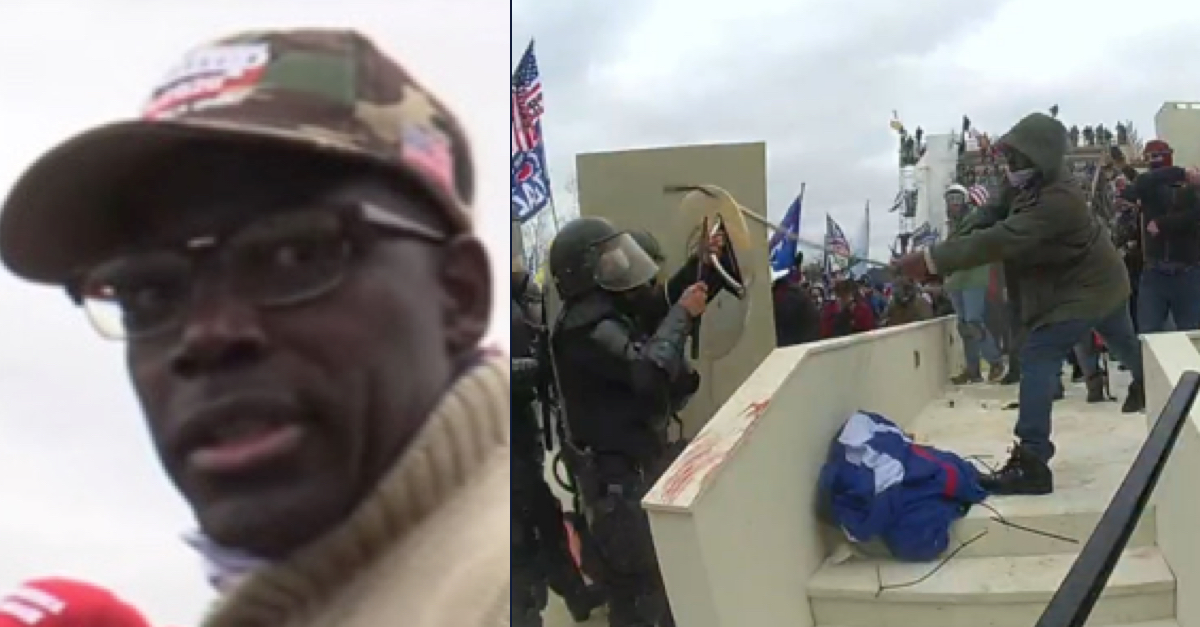 Mark Ponder is seen using a pole to strike a police officer outside the Capitol building on Jan. 6. (Image via FBI court filing.)

A resident of Washington, D.C., who was seen swinging a pole and hitting police at the Capitol on Jan. 6 has pleaded guilty to felony assault.

Mark Ponder, 56, admitted Friday to striking three police officers with a pole during the melee outside the Capitol building on Jan. 6, hitting one of them so hard that the impact broke the pole in two.

At around 2:31 p.m., as the riotous crowd of Donald Trump supporters faced off against police, Ponder “ran out from the crowd and swung a long, thin pole at a U.S. Capitol Police officer,” according to a Department of Justice press release.

“The officer protected himself by raising his riot shield above his head,” the DOJ statement continued. “Ponder’s pole struck the riot shield and broke in two, with part of the pole flying off to the side. Ponder then retreated into the crowd.”

Ponder emerged seconds later, having “re-armed himself with a new, thicker pole that was colored with red, white, and blue stripes,” the press release said. At around 2:32 p.m., Ponder ran toward a second Capitol Police officer and struck again, but that officer was also able to protect himself with his riot shield.

Ponder wasn’t finished. At around 2:48 p.m., he joined a crowd of rioters facing off against a line of Metropolitan Police officers on the Upper West Terrace.

“He swung the same striped pole and banged it against the ground in a menacing manner,” the DOJ said. “Then, as the police officers advanced to move the crowd, Ponder wildly swung the pole at the advancing police line, striking an officer in the left shoulder.”

According to the complaint, Ponder was briefly apprehended after his assault on Jan. 6, but the escalating situation around the Capitol building forced officers to abandon the arrest.

“After [Ponder was] physically taken to the ground and detained on the Upper West Terrace, MPD Officer #4 began the process of arresting and transporting Ponder from the Capitol Grounds,” the statement of facts in support of Ponder’s arrest said. “However, due to the chaotic nature of the day, the arrest was not completed on January 6, 2021. At approximately 3:15 p.m., Ponder was released without charges by MPD Officers #3 and #4 because a transport vehicle was unable to reach the Capitol Grounds and because the officers were ordered to respond back to the riot to assist with crowd control.”

Ponder had also been charged with civil disorder, obstruction of an official proceeding of Congress, and disorderly conduct. Those charges are expected to be dismissed when he is sentenced.

According to the Justice Department, the federal assault statute carries a maximum sentence of up to 20 years in prison and a fine of up to $250,000. The plea agreement, which considers Ponder’s 2008 conviction for robbery and bank robbery, estimates a sentencing range of 57 to 71 months and a fine between $20,000 and $200,000.

Editor’s note: This story initially stated that the attack on police shattered a riot shield. It was the pole the broke as a result of the attack.