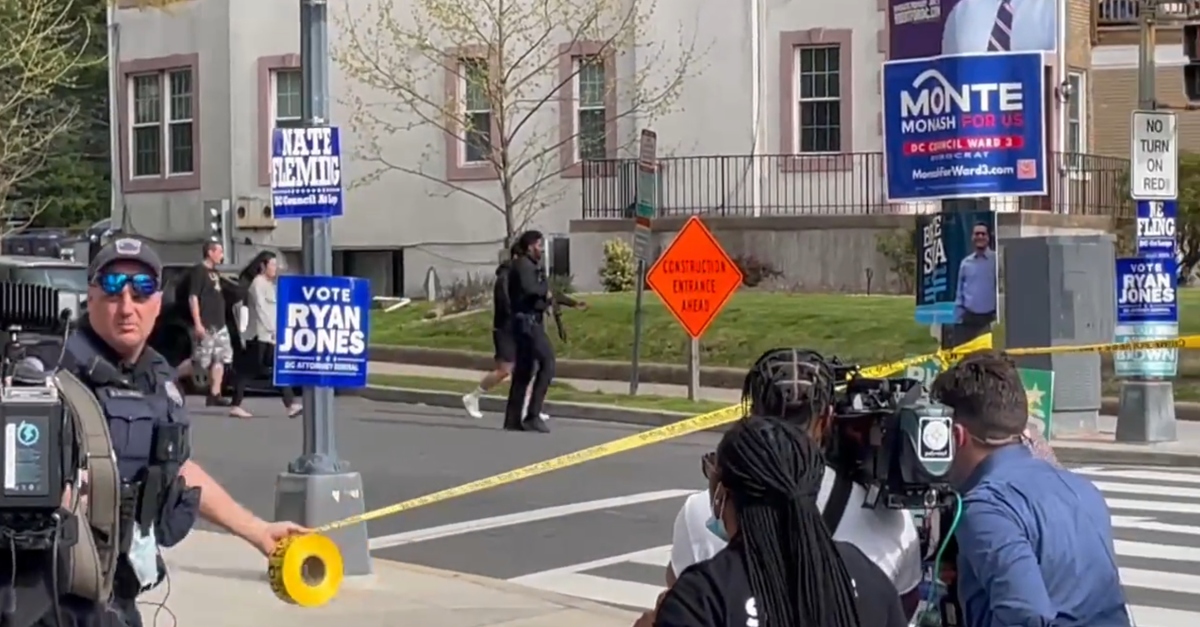 Police say three people were shot and wounded Friday in Washington D.C. Officers did not initially detail how the victims — two men and a juvenile girl — were doing, but a local university is on lockdown and cops advise that nearby residents shelter in place. A witness told a local reporter he easily heard 40 rounds being fired.

D.C. cops initially said they responded to the 4100 block of Connecticut Avenue, NW on a report of at least two shooting victims.

“The location of this incident is 2900 block of Van Ness Street, NW. Police are in the area conducting active sweeps,” they said in an update later. “Residents in the Cleveland Park and Van Ness area should shelter in place.”

Officers did not suggest any details about a suspect or suspects.  However, police asked that if anyone in the area has information on this matter to call them at (202) 727-9099 or text 50411.

4:27 pm Update: There have been at least 3 victims located of two adult males and one juvenile female.

Please continue to avoid the area and shelter in place.

The nearby University of the District of Columbia announced a shelter-in-place notice Friday afternoon, saying their Van Ness campus was on lockdown. The school identified the matter as an incident involving an active shooter.

The Van Ness campus is on lockdown. Active shooting incident near student housing located on Van Ness Street/Connecticut Avenue NW. The suspect remains on the loose. Law enforcement is on the scene. Take shelter and stay in place until further notice.

Local broadcast reports showed footage and pictures of police out in force escorting people from the area — including the Edmund Burke School.

We have a vantage point as people are being let out of the apartment complex near the school. Police could be seen pointing up with guns. @wusa9 pic.twitter.com/j3E7qRapRe

Sixth graders from Edmund Burke gathering at the nearby liquor store. @wusa9 pic.twitter.com/AxQ6QfsoV0

“I heard probably four magazines being emptied,” he said. “Rounds of eight or 10.”

Units were in the area of Connecticut Avenue and Van Ness Street looking for a suspect or suspects. The investigation is ongoing. Police announced no suspects in custody and had no description available. They detained several people fleeing from the scene, but said that it was normal for people to flee from gunfire like this.

No police were injured. Officers had no motive as of the update.