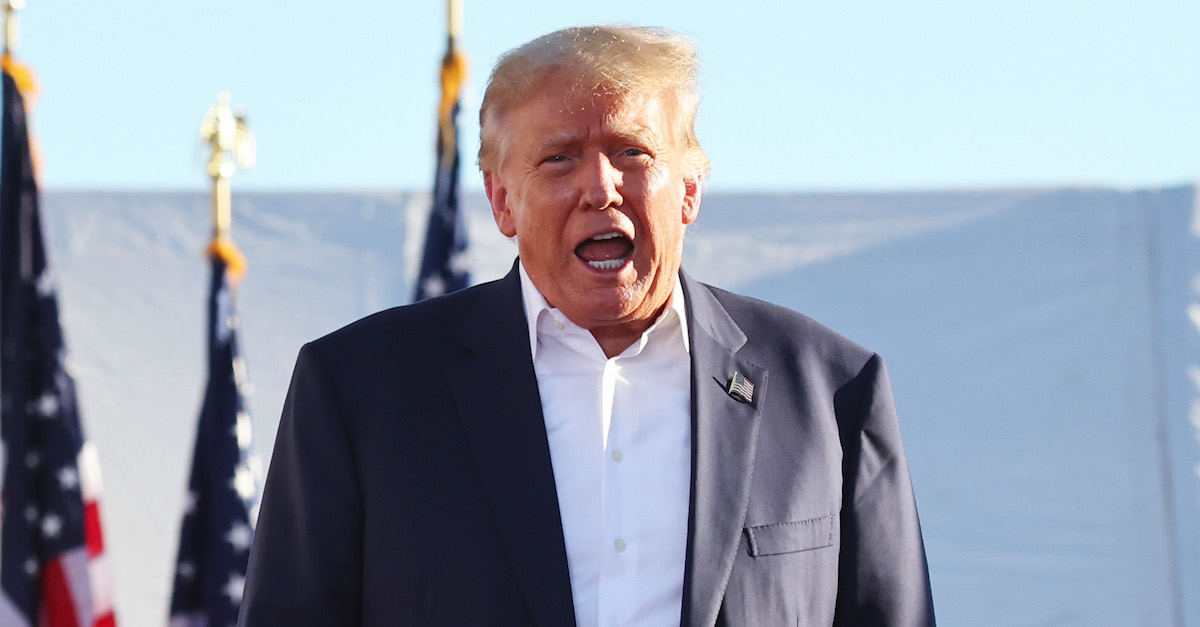 The special master tapped to oversee privilege disputes between Donald Trump and the U.S. Department of Justice said during a telephone conference on Monday that he wants attorneys to provide him with plenty of facts when — and preferably some sort of warning before — he is asked to rule on each disputed document starting on Nov. 12.

Senior U.S. District Judge Raymond Dearie told attorneys for Trump and the DOJ that he doesn’t know whether to expect ten documents or ten thousand documents on the relevant mid-November date.

Initially, Dearie sought to have the parties provide documents for his examination on a rolling basis.  U.S. District Judge Aileen M. Cannon, who is overseeing Trump’s challenge against the government’s seizure of a tranche of documents and other items from Mar-a-Lago, rubbished that plan and instead ordered the material to be submitted to Dearie in bulk fashion.

Dearie said the lack of rolling document production had been “concerning [him] from the outset.”

“We no longer are going to take rolling submissions from the parties,” he said, citing Cannon’s directive to him which in essence rubbished his own plan for his own duties.

To ameliorate against a potential deluge come Nov. 12, Dearie asked the parties to keep him appraised, as best they could, as to what may be headed his way. He said he wasn’t sure whether he would be asked to referee ten or ten thousand pages of material — “that is a bit of a concern,” he said — and he asked for “at least some estimate as to the number of challenges we’re going to get to the asserted privileges.” He said he hoped that estimate could be provided as the parties “progress” in their discussions leading up to Nov. 12.

Specifically, Dearie said, he would have to contemplate hiring more staff if the document dump is large.

Julie Edelstein, the Deputy Chief of the Counterintelligence and Export Control Section at the DOJ, noted that the government finished its initial review of the material on Oct. 12. The remaining processes before the material gets to Dearie will require three weeks (for Trump’s review) and then 10 more days, which places the parties at the aforementioned Nov. 12 date whereby Dearie will receive the materials upon which he must rule. A comprehensive, annotated spreadsheet will be submitted to Dearie as part of that process.

Dearie questioned why an estimated 200,000 pages of material suddenly dropped to an actual total of 21,792.

The reason, said another government representative on the well-attended call, was because “there was no real page count of 200,000 pages.”

Rather, a software vendor selected to scan and digitize the material estimated that 11,000 documents likely contained a standard number of individual pages. Business documents, according to that vendor, usually contain 18.18 pages each, so the vendor came back with an estimate of around 200,000 individual pages based upon the math.

The number of boxes of material in question couldn’t even hold that many pages, the attorney said. The estimate was wildly off.

With the number of pages and the relevant dates nailed down, Dearie noted that he has only about a month to look at and review the material once it’s submitted. He said he expected the parties to provide specifics to make his job easier.

“I have very little other than what you’ve noted on the log,” Dearie said while referencing an Oct. 3 filing. “I need to get some support either from the assertion of the privilege or from the government’s position that the privilege does not apply.”

In other words, talismanic and cursory assertions of privilege will be insufficient.

Discussion then centered on Item No. 5 contained in Exhibit A as filed on Aug. 3 — an unsigned letter seized by the government from apparent Trump attorneys at the law firm Kasowitz Benson & Torres to Special Counsel Robert Mueller. The letter was dated June 23, 2017. A privilege review team identified the letter as a potential source of privilege.

Discussion surrounded whether or not the letter was actually sent to the government recipient indicated or whether it had not been sent.

An “area of concern,” Dearie said, was how to characterize the potential privilege attached to the letter. He said he expected the parties to explain “at a minimum” who represented Trump. He also needed to know the specific “litigation in which” the attorney work product was created and whether or not the presence of a third party might defeat attorney-client privilege.

He further said he needed to know the “facts on which the government is relying” to explain why the privilege doesn’t apply.

In other words, Dearie needs specific facts surrounding the documents in question.

Questions then turned toward whether or not the letter was actually sent.

Benjamin Hawk, the Deputy Chief of the DOJ’s Counterintelligence and Export Control Section, replied on behalf of the government:  “We are in a difficult position to be able to refute a claim or offer a response if one is put forward.”

That was because the government said it did not know the basis for all or some of Trump’s claims of privilege.

“It is pretty well settled law in the 11th circuit” that the person asserting the privilege has the burden of explaining how the privilege applies, Hawk asserted.  “We are ready, and we have been ready to proceed on these issues for some time.”

It was then posited that the current disputes focused on 11 documents.

“I don’t want to rule on privilege claims without the parties figuring out in conference the facts,” Dearie again repeated — again asking whether or not the specific letter in question was actually sent.

“It was sent to the government,” Trump attorney James M. Trusty then offered. “The version we’re talking about is an unsigned document. So, we’re in a position of not knowing [if the document] is something the government [received].”

“I have no patience for either of you,” Dearie said in a polite yet frustrated exchange.

Dearie then said the government needs to match its files with what Trump had at Mar-a-lago. If the letter receives the letter sent, then the document in question was transmitted and received.

“There is no gamesmanship on behalf of the government,” Hawk then said.

Dearie, referencing the apparent ease at which the quibble over the Mueller letter could be settled, said he did not want to deal with “nonsense objections and nonsense assertions.”

DOJ attorney Anthony W. Lacosta then said he had sent a copy of the letter at issue to Trusty on Sept. 20.

Dearie then turned to the more weighty matters of whether or not executive privilege and the presidential records act necessitated deference to Trump. He said a “certain incongruity” existed as to those matters.

That puts it mildly. The DOJ has long asserted that Trump cannot claim executive privilege against the executive branch itself — now helmed by Joe Biden. But other forms of privilege, such as attorney-client privilege and attorney work product privilege, may nonetheless apply.

Again, Dearie implored the parties to be specific.

For instance, if a document is personal rather than presidential under the Presidential Records Act, Dearie said he expected Trump’s attorneys to spell out the nature of that claim for him when he is called upon to make a ruling on the matter. He also said he wants to know precisely what steps were followed surrounding any document in question and that assertion.

“It’s a little perplexing as I go through the logs,” Dearie explained. “Where’s the beef? I need to see some beef.”

Dearie also said he expects the parties to brief any “global issues” relevant to his review by Nov. 12.

“Thank you for your guidance,” Trusty said. He said he’s “flagging the potentials” and then working to ascertain the specific facts as his review of the material given to him by the government continued.

Dearie reiterated that he would appreciate some update from the parties as to what he should anticipate come Nov. 12.

The telephone conference wrapped up after about 25 minutes.