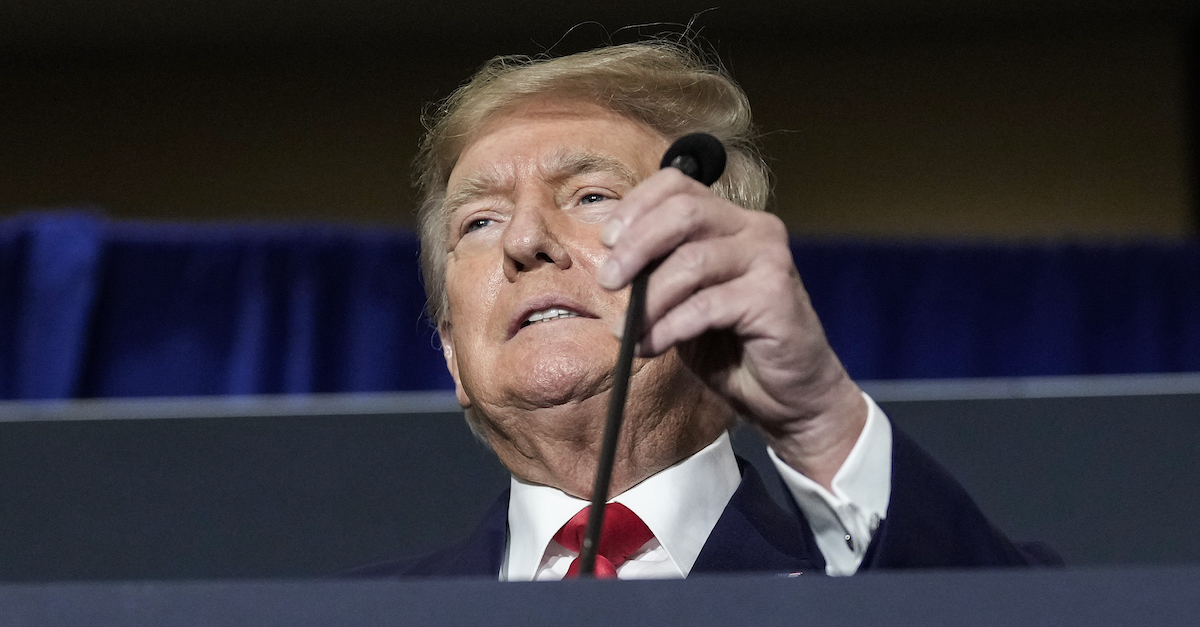 Attorneys for the U.S. Department of Justice on Tuesday filed a motion arguing in support of temporarily scuttling the judge-ordered special master process over allegedly classified records seized from the Florida home of ex-President Donald Trump in early August. Unauthorized disclosure of those records could cause “exceptionally grave damage,” the DOJ said in an effort to underscore the sensitivity of the matter.

In the reply supporting their motion for a stay pending appeal, prosecutors frame their request as “limited but critical relief,” arguing that the court should not lightly require review of “documents whose disclosure would jeopardize national security.”

These records are at the core of the government’s investigation, and the government’s inability to review and use them significantly constrains its investigation. The compelled disclosure of records marked as classified to a special master further harms the Executive Branch’s interest in limiting access to such materials absent any valid purpose served by their review. See United States v. Reynolds, 345 U.S. 1, 10-11 (1952) (courts should be cautious before requiring judicial review, even ex parte and in camera, of documents whose disclosure would jeopardize national security).

Largely a response to a Monday filing by Trump’s attorneys arguing against the stay request, the DOJ’s filing clarifies that they are not attempting to keep the entire special master process from playing out, but rather, are seeking “a stay only as to a discrete set of just over 100 records marked as classified—that is, records that were specifically sought by a prior grand jury subpoena, whose unauthorized retention may constitute a crime.”

The government filing employs the language of the national security state to make its case, arguing the universe of documents in question “contain markings signifying that their unauthorized disclosure” could reasonably “be expected to result in damage to the national security.”

A footnote on page one responds to Trump’s efforts to minimize the nature of the dispute about the contents of those documents:

[Trump] has characterized the government’s criminal investigation as a “document storage dispute” or an “overdue library book scenario.” In doing so, [Trump] has not addressed the potential harms that could result from mishandling classified information or the strict requirements imposed by law for handling such materials.

The government’s foremost argument is that Trump’s Monday motion failed to show he has a “property” interest in the documents and therefore no “need for” the documents to be returned to him.

“[Trump] instead references other seized records that contain personal information or could be subject to attorney-client privilege, none of which are at issue in this stay motion,” the DOJ argues. “As to the records marked as classified, Plaintiff asserts that the government has not ‘proven’ their classification status.”

Trump’s foremost argument in his motion against the stay was that Judge Aileen Cannon, a Trump appointee, “was correct” and well within her authority when she granted the request to appoint a special master to review the documents for privilege in the first place.

The government’s Tuesday filing largely contains several pages arguing against the basic notion that Trump, or any former president, could have a property interest in U.S. government-owned documents – precisely because the Presidential Records Act, which the 45th president has been citing in his own briefs, makes that property interest clear and in favor of the United States itself.

As Law&Crime previously reported, Trump also pointed out “unauthorized leaks” to the news media regarding the contents of the documents “the Government has determined are classified” in an effort to bloody prosecutors’ noses regarding the alleged national security interests at stake and to try and paint the DOJ as making a tautological, or circular, argument.

The government declined to acknowledge the issue of leaks.

The DOJ filing goes on to catalogue Trump’s refusal to address many of the government’s own arguments, and instead accuses him of attempting to “change the subject,” with the hint of possible declassification.

And, the government muses, even if the files were declassified, they still say Trump can’t keep them away from investigators.

From the motion, at length:

In any event, even if Plaintiff had declassified any of the approximately 100 seized records bearing classification markings while he was still in office, the government’s “demonstrated, specific need” for those records, would easily overcome any asserted claim of privilege. For obvious reasons, the Intelligence Community would have a compelling need to understand which formerly-classified records have now been declassified, why and how they were declassified, and the impact of any such declassification, including on the IC’s protection of its sources and methods and on the classification status of related records or information. The Department of Justice and Federal Bureau of Investigation would also have a compelling need to review any purportedly declassified records as part of the government’s investigation into the adequacy of the response to the May 2022 grand jury subpoena, which sought “[a]ny and all documents or writings in the custody or control of Donald J. Trump and/or the Office of Donald J. Trump bearing classification markings.”

In a more direct attack on the privilege claims Trump has asserted, the government also points out that if Trump actually used the PRA to designate any of the “TOP SECRET” files his “personal records” then he cannot, by definition, exert an executive privilege claim over them now.

Justice Department attorneys have been busy this week.

Also on Tuesday, the DOJ filed an affidavit in the original and companion case over the Mar-a-Lago search warrant, a related but legally different matter, which specifically has to do with the evidence marshaled by the government to effect the unprecedented search-and-seizure warrant at the former U.S. president’s home in the first place.

In that earlier Tuesday filing, DOJ attorneys asked U.S. Magistrate Judge Bruce Reinhart to allow them to file a less redacted form of the search warrant. This version, the government said, should contain certain information related to grand jury subpoenas used in the underlying investigation.

The existence of those subpoenas was confirmed by the special master litigation, prosecutors argued, so they should now be able to tell the public some bare bones facts about their existence. The judge granted that request.