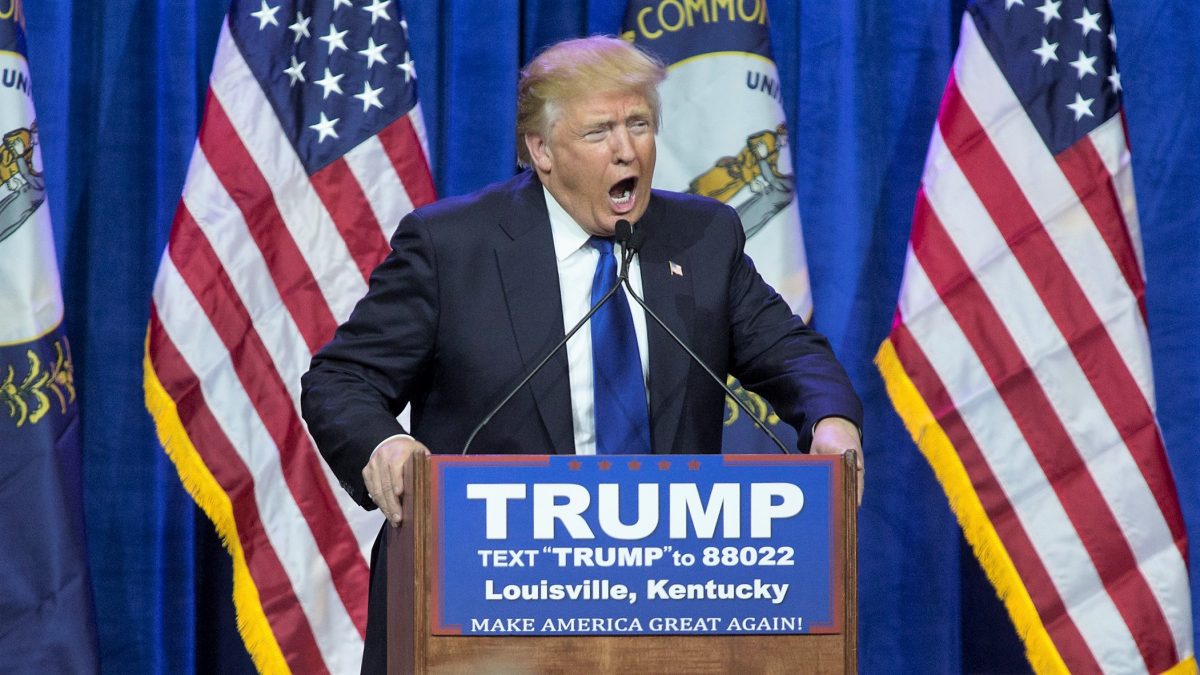 Trump’s March 1, 2016 Campaign Rally in Louisville, Kentucky, which gave rise to the lawsuit.

Three judges on the federal Sixth Circuit Court of Appeals in Cincinnati, Ohio, have granted a win to President Donald Trump in a lawsuit by three protesters who attended a March 1, 2016 campaign rally. The protesters “attended the rally with the intention of peacefully protesting,” the court said, but the “[p]rotesters’ actions during Mr. Trump’s address precipitated directions from Trump on five different occasions to “get ’em out of here.'” From there, several “members of the audience assaulted, pushed and shoved” the protesters. One was “punched in the stomach.”

The protesters sued two named attackers, one unknown woman (who threw the stomach punch) and Trump himself for battery, assault, incitement to riot, negligence, gross negligence, and recklessness. A lower federal court wiped away many of the claims but left an appeals court to sort out whether Trump incited his supporters to riot against the protesters. The Sixth Circuit had to analyze whether (1) incitement to riot occurred under underlying state law, and (2) whether Trump’s words were protected by the First Amendment. The Sixth Circuit held that the protesters lost on both counts.

In so holding, the Sixth Circuit slammed the lower court for a “decidedly thin” analysis which “stopped short of identifying what allegations supported a plausible finding that Trump, by words or actions, incited tumultuous and violent conduct posing grave danger of personal injury.”  Critical to the analysis was this fact admitted by the protesters who were attacked:  Trump’s “‘get ’em out of here’ statement was closely followed by his admonition, ‘Don’t hurt ’em.'”

Thus, Trump didn’t break state law, but the Court of Appeals didn’t stop there. It went on to chide the lower court for failing to “identify a single word in Trump’s speech that could be perceived as encouraging violence or lawlessness . . . not a single word encouraged violence orlawlessness, explicitly or implicitly.”

“Trump’s words may arguably have had a tendency to encourage unlawful use of force, but they did not specifically advocate for listeners to take unlawful action and are therefore protected,” the Sixth Circuit rationed:

The words were said at a campaign rally by the main speaker in response to disturbances caused by protesters. The words were self-evidently said in order to quell the disturbances by removing the protesters. The words were directed to unidentified listeners in the Convention Center, among whom most were Trump supporters who were not sympathetic with the protesters. In the ears of some supporters, Trump’s words may have had a tendency to elicit a physical response, in the event a disruptive protester refused to leave, but they did not specifically advocate such a response. As to how the offensive words were said, we know, most relevantly, by plaintiffs’ own allegations, that the words were accompanied by the admonition, “don’t hurt ’em.” That this undercuts the alleged violence inciting sense of Trump’s words can hardly be denied.

The Sixth Circuit relied heavily on the First Amendment logic of Bible Believers v. Wayne Cty., Mich., a 2015 case where a self-described group of evangelical Christians sued a Michigan municipality for failing, through its sheriff’s office, to “quell the violence” directed towards the Christian group during an Arab festival. The Christian group showed up to spread its message during the festival and was confronted by a “lawless crowd of adolescents.”

Interestingly, the Sixth Circuit refused to review a video (like this one or this one) of the altercation and speech in making its decision:

Plaintiffs have noted that Trump’s speech at the Louisville rally was video recorded and the recording may be viewed online at www.youtube.com. The Trump defendants object to consideration of the Youtube video, arguing that it’s not part of the record and was not before the district court when it made its ruling. We agree. The video is given no consideration in our analysis.