The Government Seized an Elderly Minnesota Woman’s Home Over $2,300 in Unpaid Property Taxes, Sold It, and Pocketed the Proceeds. The Supreme Court Just Agreed to Hear Her Case. 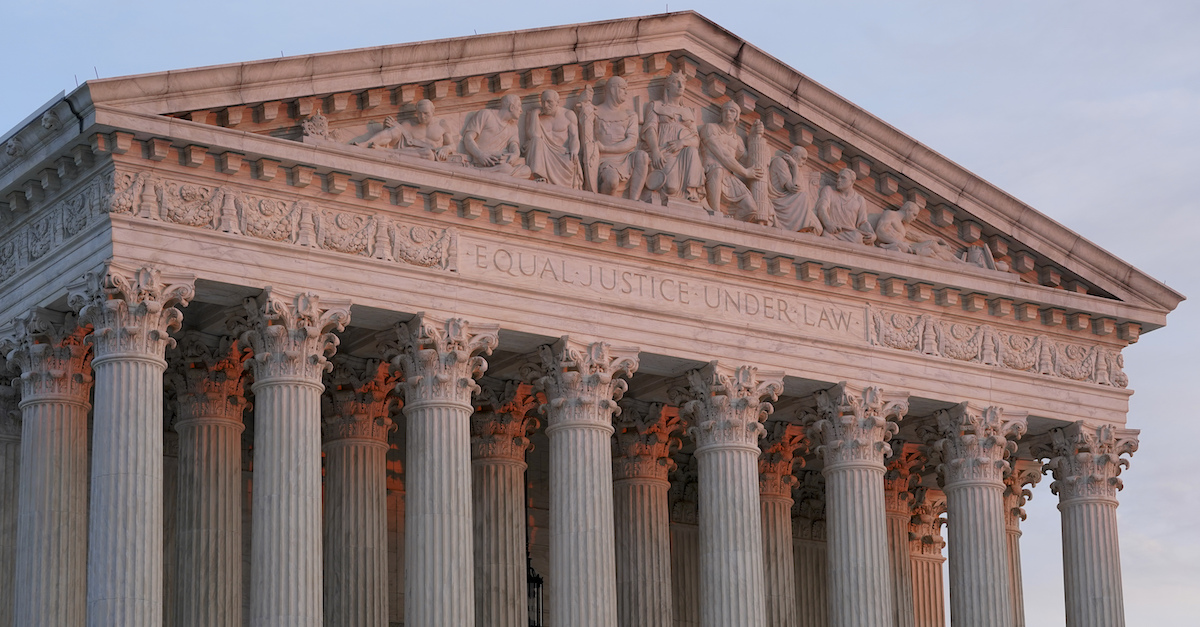 An elderly widow whose condo was seized and sold by the county government for unpaid property taxes, with the government pocketing the proceeds from the equity in her property, may finally get relief after the United States Supreme Court agreed to hear her case.

In 1999, Geraldine Tyler bought a one-bedroom condo in Minneapolis, Minnesota that she called home until 2010, when rising crime in the neighborhood alarmed her and her family, so she rented an apartment in a safer area. After she moved, she had financial difficulties and about $2,300 in unpaid property taxes accrued on the condo.

Tyler is now 93 years old and lives in an assisted living facility. The Pacific Legal Foundation (along with attorneys from the law firms of Guin, Stokes & Evans, LLC; Reinhardt Wendorf & Blanchfield; and Teske Katz, PLLP) is providing pro bono representation to Tyler as she seeks to regain the equity Hennepin County took from her. Law&Crime spoke to PLF attorney Christina Martin, who is the lead counsel on Tyler’s case, on Saturday by telephone. 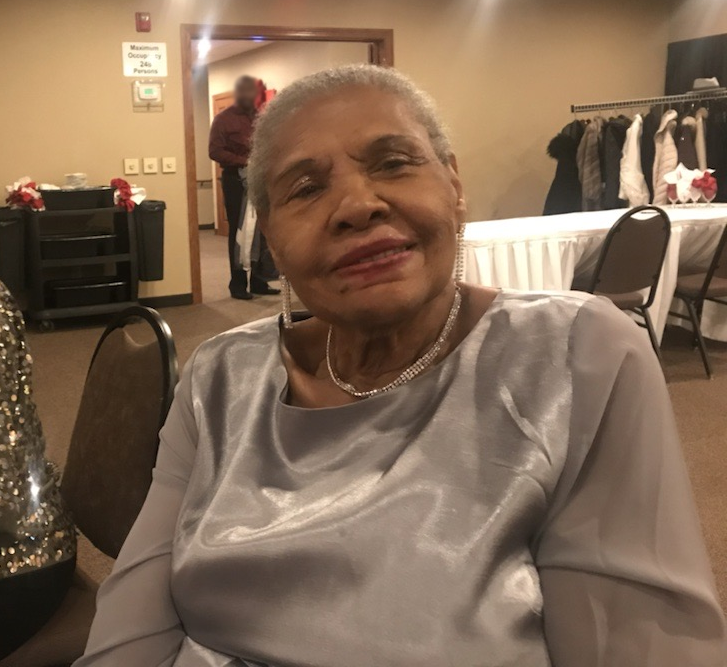 According to the PLF, Minnesota allows county governments to seize property for unpaid taxes, force a sale, and keep any excess value. From 2014 to 2021, at least 1,360 Minnesotans lost their homes in this way for debts that averaged only 8 percent of the home’s value, representing a stunning total of over $100 million in home equity lost.

And Minnesota is far from the only state that permits home equity theft. A PLF review of laws across the country found it is allowed in a total of twelve states plus the District of Columbia and permitted “in limited situations” in an additional nine states. 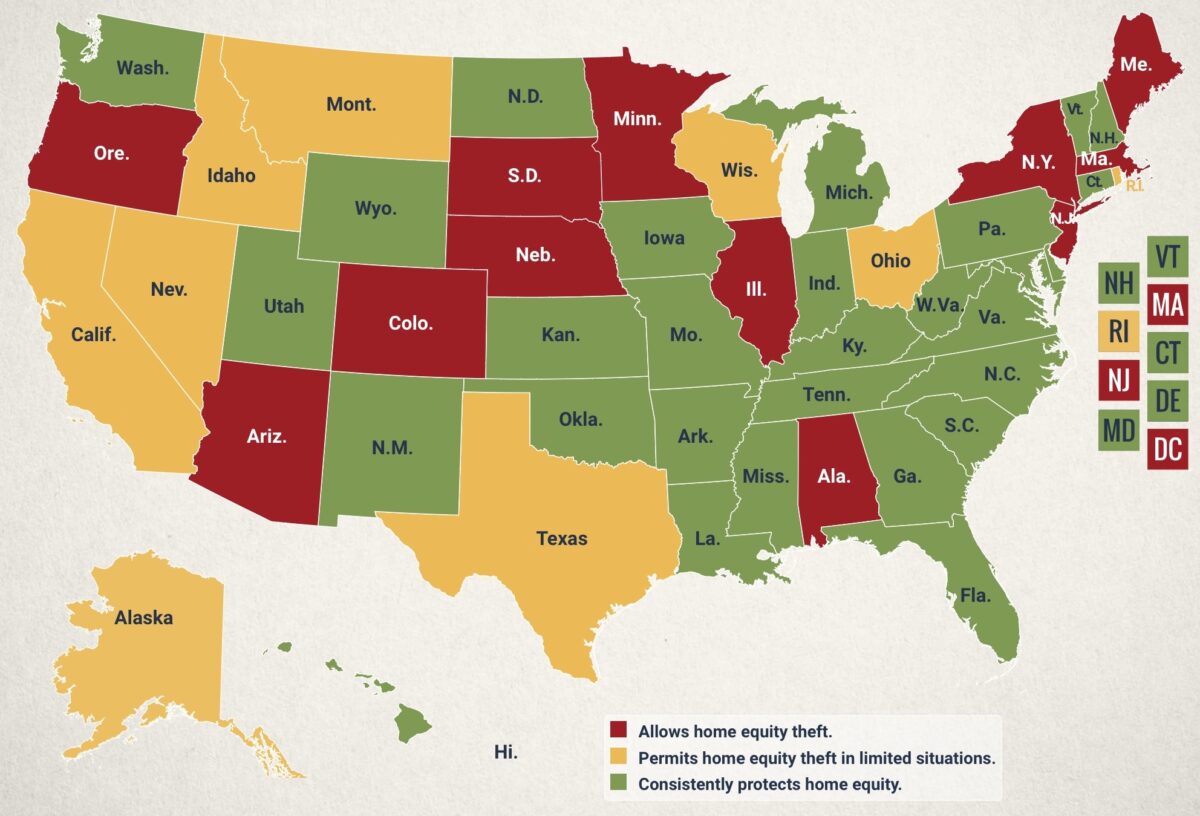 Minnesota isn’t even the worst offender. New Jersey forced 661 homes into foreclosure and sale resulting in a loss of nearly $115 million in equity during that same 2014-2021 period, and Illinois is the number one home equity robber, taking nearly $400 million in equity from 4,719 homes.

PLF has continued to gather national data on home equity theft, finding thousands of homes that were forced into sales from 2014 to 2021 by local governments or private investors holding tax certificates (that’s an entirely different avenue for abuse) and losing over $777 million in home equity. But these figures “severely understate” the problem because they’ve only been able to review select records in a fraction of jurisdictions in each state. “The reality,” says the PLF website, is unquestionably “even worse.”

As an example of how some states have drafted protections for property owners, Section 197.582 of the Florida Statutes provides clear procedures for the disbursement of proceeds from a tax sale, spelling out the priority of payments to the holder of the tax lien, any other government liens, and senior and junior lien holders (such as mortgages, second mortgages, or home equity loans). Florida law directs the clerk of the court collect the surplus funds, provide notice to lien holders to submit their claims within a 120-day claim period, and then if there are any remaining funds after that time expires, “there is a conclusive presumption that the [former property owner] is entitled to the surplus funds.”

Tyler had no such law protecting her in Minnesota; to the contrary, the state law spelled out how various local government entities should divide up their ill-gotten gains, distributing funds to various county budgets for “forest development and county parks and recreation areas,” plus other “specified percentages” to the relevant county, school district, and city coffers.

Tyler filed suit arguing when Hennepin County kept the $25,000 value from her property that was in excess of the debt she owed, it was a violation of her rights under the U.S. and Minnesota Constitutions, specifically the federal and state takings clauses, excessive fines clauses, and substantive due process, in addition to unjustly enriching the county with the surplus profits.

The county removed the case to federal court and filed a motion to dismiss for failure to state a claim and prevailed at the district court level, Tyler appealed, and the U.S. Court of Appeals for the Eighth Circuit affirmed the lower court’s granting of the motion to dismiss.

In its ruling, the Eighth Circuit ruled that “for Tyler to state a plausible claim for relief, she must show that she had a property interest in the surplus equity after the county acquired the condominium.” The court ruled that because the Minnesota statute provided how the county was to spend the entire surplus and did not grant the former property owner a right to that surplus, Tyler did not have a right to the $25,000 in excess of her debt from the sale of her condo.

Tyler appealed the Eighth Circuit’s decision to the Supreme Court, arguing that the appellate court had erred in their ruling by not recognizing the debtor’s property rights in the equity value of their homes. Allowing a county government to take more property than necessary to pay a tax debt “violates deeply rooted property rights” and conflicts with prior Supreme Court case precedent on takings cases, wrote Tyler’s attorneys in their Petition for Writ of Certiorari.

“No one disputes that government may lawfully seize property to collect a debt,” the motion continued. “But when it takes more than what it is owed, it violates the Takings Clause” because the government’s power to collect a tax debt is “exhausted the moment the tax was collected.” The Eighth Circuit had also failed to properly address Tyler’s claim that the county’s retention of the $25,000 was a violation of the Constitution’s prohibitions on excessive fines.

Tyler’s case raised a “a pressing national problem that has festered for decades in the lower courts,” concluded the attorneys, and “presents an excellent vehicle” for the Supreme Court to “put the controversy to rest” by issuing a ruling on whether these statutes constitute unconstitutional takings or excessive fines, and pointed out the inequities often present in these cases:

Windfall statutes like Minnesota’s have devastating consequences for homeowners who fall behind on their taxes for non-blameworthy reasons, including cognitive decline, physical or mental illness that led them to financial difficulty, or simple poverty. Elderly property owners, like Tyler, are especially susceptible to losing their property in this way when they leave their residences for senior living or medical facilities and fail to recognize the consequence of allowing a foreclosure to occur…As Justice Thomas wrote about other types of forfeitures, “[t]hese forfeiture operations frequently target the poor and other groups least able to defend their interests in forfeiture proceedings. Perversely, these same groups are often the most burdened by forfeiture.” (Citations omitted.)

The Supreme Court included Tyler v. Hennepin County among those cases granted a writ of certiorari on Friday, Jan. 13.

She took issue with the county’s argument that the district court accepted in granting the motion to dismiss, that the Minnesota statute authorized the county to seize the surplus proceeds in excess of the delinquent taxes.

“Property rights don’t just disappear because the state legislature says so,” Martin insisted. “If that were the case, then the Fifth Amendment would just basically be an illusory protection.”

What had happened to Tyler had happened to “thousands of property owners across the United States,” said Martin, who has developed a special expertise in these kinds of cases.

One particular egregious example Martin shared was in Michigan, where Oakland County seized her client Uri Rafaeli’s rental property over $8.41.

Yes, you’re reading that correctly. Rafaeli had bought the small rental house for $60,000 in 2011 and inadvertently missed one of the tax bills that first year. He paid his 2012 and 2013 taxes in full. When he did get the bill in the mail in Jan. 2013 for the outstanding 2011 taxes, he sent a check, but the interest had continued to accrue and he underpaid by $8.41. The county foreclosed, sold Rafaeli’s property for $24,500, and “kept all the money,” said Martin.

The situation was “completely unjust,” Martin continued, and “shockingly, that has happened to a lot of people,” because these laws “create this financial incentive for the government to foreclose on people who are often the most vulnerable in society,” those who are elderly, medically ill, socioeconomic disadvantaged, and so on, who face losing their property this way.

“And so when you create an incentive for the government to foreclose on people and take a windfall to support various government projects, unsurprisingly you get a lot of really dumb foreclosures that never should have happened in the first place,” she said.

The state law was changed after the Michigan Supreme Court ruled that Rafaeli should not have lost the entire value of his property over $8.41 in unpaid taxes (a seemingly obvious conclusion but it did take appealing all the way to the state’s highest court to get there), but Michigan counties have continued “fighting hard” to defend their nefarious seizures under the previous version of the statute, Martin said. She described a pending case in Michigan where she represented a family who bought a four-unit apartment home and unknowingly underpaid their taxes by $144, and the county seized the building, sold it for $108,000, and kept all the money.

These kind of takings by the government have “no basis in history,” Martin emphasized. “You had more protections under the Magna Carta in 1215” than Americans do today in what she referred to as the “naughty states” — those that allow home equity theft.

It was the “most vulnerable people,” said Martin, “who end up getting robbed legally” by their own governments, “so that’s why we’re hoping that this isn’t just a victory for Mrs. Tyler — we’re hoping it will end all home equity theft in the United States.”

“I think just by bringing attention to it, if people knew this was going on, they wouldn’t put up with it,” she concluded. “Because every time I’ve spoken to people about this — left, right and center, it doesn’t matter where you are on the political spectrum — people are upset.”

This article has been updated with additional information clarifying the change in the Michigan statute.