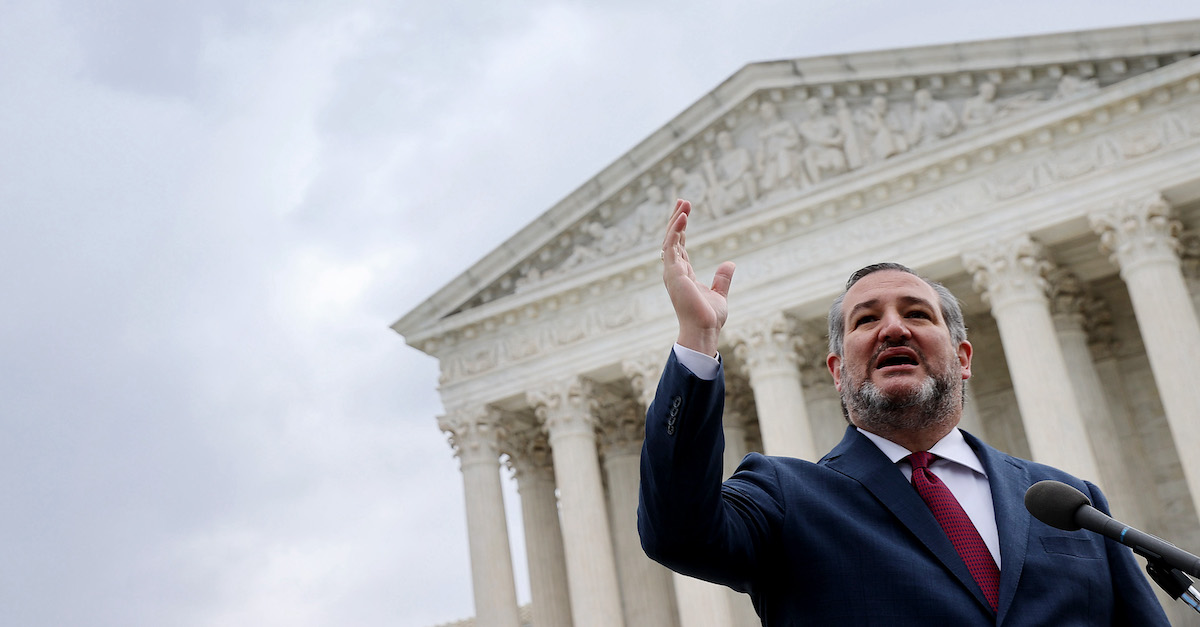 Sen. Ted Cruz (R-Texas), who in late 2016 suggested Senate Republicans should indefinitely leave the Supreme Court with only eight justices if Hillary Clinton were to win the presidency, on Thursday said Republicans never tried to “rig the game” by altering the high court’s makeup.

Cruz made the comments flanked by Sen. Lindsey Graham (R-S.C.) on the front steps of the Supreme Court building.

Cruz said Democrats were trying to pack the court with “four left-wing radicals” by adding Washington, D.C. as a 51st state and by considering expanding the number of justices on the court. He accused Democrats of being “fundamentally corrupt,” of trying to “change the rules to stay in power,” and of failing to “believe in Democracy.” He also suggested they failed to “convince the voters” their “ideas are right.”

Democrats won control of the White House, the House of Representatives, and the Senate in 2020.

Cruz then slammed District of Columbia v. Heller, the famous Second Amendment case from 2008, for being decided by a narrow margin.

“That vote was five to four,” the senator noted. “The four dissenting justices were prepared to effectively erase the Second Amendment from the Bill of Rights, to conclude that no American anywhere has an individual right to keep and bear arms. These are radical and extreme ideas, and, by the way, they’re incredibly unpopular ideas. There’s a reason the Democrats don’t want to actually go to the voters and try to convince the voters to do this, because the voters would tell them to jump in the lake.”

Cruz then complained that critics tried to “paint” Donald Trump as “some kind of crazy autocrat” before he launched into additional accusations of game-rigging.

“You didn’t see Republicans when we had control of the Senate try to rig the game. You didn’t see us try to pack the court. There was nothing that would have prevented Republicans from doing what they’re doing other than respect for the rule of law, other than basic decency, other than recognizing that democracy matters, and packing the court and tearing down the institutions that protect our rights is fundamentally wrong.”

“There is certainly long historical precedent for a Supreme Court with fewer justices,” Cruz said in the wake of the 2016 death of conservative Justice Antonin Scalia.

At the time of that comment, the Supreme Court had eight, rather than nine justices because Sen. Mitch McConnell (R-Ky.) refused to move forward with the nomination of Merrick Garland by then-President Barack Obama to a seat on the high court. (Garland, who in 2016 was a federal appeals court judge, is now President Joe Biden’s Attorney General.)

The Washington Post said Cruz made the comment in 2016 in response to a question about whether Senate Republicans would continue to “blockade” Supreme Court nominations beyond the 2016 election if Hillary Clinton won the White House. Cruz was speaking at a Colorado campaign rally in 2016 for then-candidate Darryl Glenn, who did not win the election.

“I would note,” Cruz said in Colorado in 2016, “that Justice [Stephen] Breyer observed that the vacancy is not impacting the ability of the court to do its job.”  He predicted that there would “be plenty of time for debate” on whether refusing to fill Scalia’s seat through the duration of a hypothetical Clinton presidency would be warranted by the U.S. Senate — but insinuated that it might be.

That debate never happened because Trump won the White House.

The remarks at the time put Cruz at odds with Sen. Chuck Grassley (R-Iowa), who said in 2016 that the Senate could not “simply stonewall” a justice nominated by a Democrat through an entire presidency. Then-Sen. John McCain (R-Ariz.) said Republicans would be “united against any nominee” put forth by Hillary Clinton should she ascend to the presidency. He later “walked back” those comments, the Post said at the time.

A series of 2016 conservative commentaries also suggested shrinking the court for various reasons.

This history seems at least partially forgotten by the 2021 Ted Cruz, who, again, said as follows: “You didn’t see Republicans when we had control of the Senate try to rig the game.” Cruz also did not mention the swift confirmation of Justice Amy Coney Barrett after Justice Ruth Bader Ginsburg’s death less than two months before the 2020 election.

Cruz further said Thursday that “we don’t have government by men or women” but that “every person is under the law.” He referred to the Supreme Court as a “temple of justice” which has “stood up to political pressures from the very first day America was a nation.” He appeared to be referencing Marbury v. Madison, the case which gave birth to the concept that the high court’s justices could review legislative actions and strike them down as unconstitutional. But Marbury wasn’t decided “the very first day America was a nation.” It was decided in 1803.

On Thursday, Cruz also spoke highly of Brown v. Board of Education, which is legally interesting and itself a source of debate. Brown is perceived by many legal scholars as an aspirational opinion. It was arguably not decided under the originalist or textualist judicial interpretative methods now championed by both conservative judges and by their Republican promoters and boosters — though some originalists have launched extensive efforts to claim the opinion as their own.  Legal contemporaries were known to thrust not infrequent attacks on Scalia himself using Brown as a poniard; even the storied conservative jurist himself was forced to retreat from — or at best to convolute — his usual originalism when bludgeoned with the fact that the Fourteenth Amendment was not originally interpreted as an end to school segregation. Cruz didn’t engage in this debate on the courthouse steps; he merely praised Brown as a good opinion — though he also ignored that it was written by Republican governor turned left-leaning justice Earl Warren.