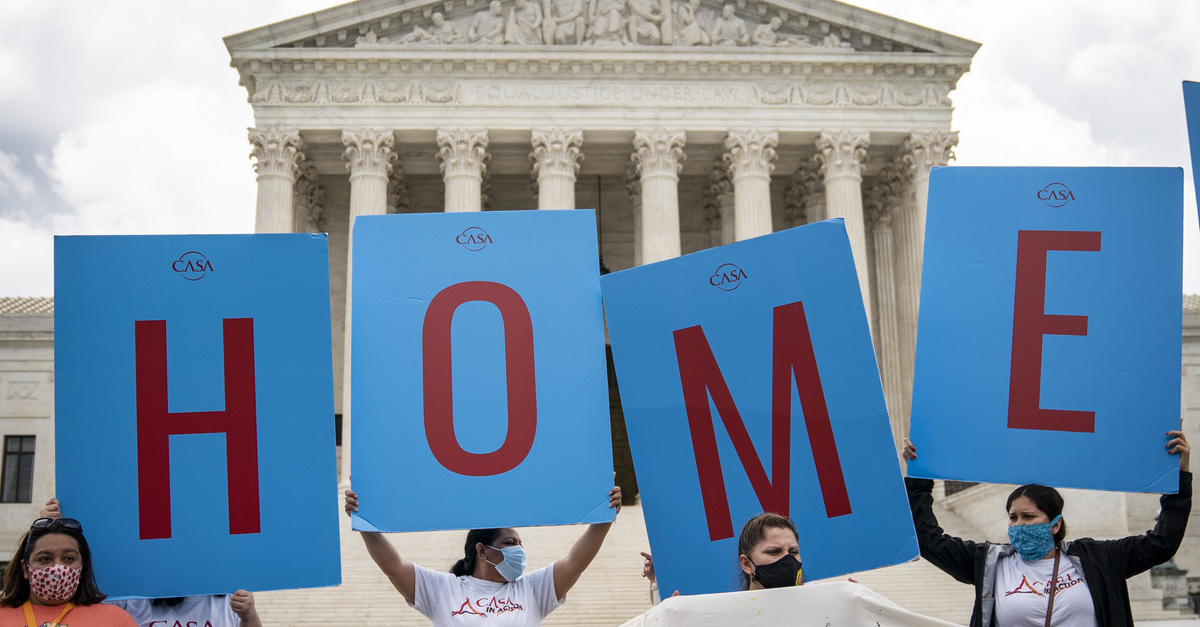 The U.S. Supreme Court on Thursday found that the Trump administration unlawfully terminated the Deferred Action for Childhood Arrivals (DACA) program in an “arbitrary and capricious” violation of the Administrative Procedure Act (APA) of 1946.

In a 5-4 decision authored by Chief Justice John Roberts, the nation’s high court issued a stunning and unusual rebuke of the White House’s immigration agenda. A three-circuit split caused by three petitioners’ cases was resolved in favor DACA recipients, undocumented immigrants who came to country as children and have lived here their entire lives, colloquially known as Dreamers.

A word of caution is in order, however, because the opinion, stylized as Department of Homeland Security v. Regents of Univ. of Cal., is cabined under the auspices of the APA, the Supreme Court has simply said President Donald Trump and the Department of Homeland Security (DHS) went about dismantling DACA in the wrong way–not that any potential dismantling in the future would necessarily be unlawful. In fact, Thursday’s ruling makes such a lawful dismantling all the more likely, should the White House attempt to move forward with killing the program.

“The dispute before the Court is not whether DHS may rescind DACA,” Roberts notes at the beginning of his analysis. “All parties agree that it may. The dispute is instead primarily about the procedure the agency followed in doing so.”

The majority of the court’s discussion hinges upon the years-old justification that former DHS secretary Kirstjen Nielsen used to defend her immediate predecessor’s DACA rescission when she argued before a Washington, D.C. district court in 2018.

In September 2017, then-acting DHS secretary Elaine C. Duke issued a conclusory memorandum which flatly declared DACA illegal and directed her subordinates to end the program. Litigation immediately ensued across the country and several courts found the initial justification extremely lacking. After Nielsen took control of DHS, she was asked to either submit a new memorandum explaining the agency’s decision or to elaborate on Duke’s reasoning.

She chose the latter. The chief justice explains:

She explained that, “[h]aving considered the Duke memorandum,” she “decline[d] to disturb” the rescission. Secretary Nielsen went on to articulate her “understanding” of Duke’s memorandum, identifying three reasons why, in Nielsen’s estimation, “the decision to rescind the DACA policy was, and remains, sound.” First, she reiterated that, “as the Attorney General concluded, the DACA policy was contrary to law.” Second, she added that, regardless, the agency had “serious doubts about [DACA’s] legality” and, for law enforcement reasons, wanted to avoid “legally questionable” policies. Third, she identified multiple policy reasons for rescinding DACA, including (1) the belief that any class-based immigration relief should come from Congress, not through executive non-enforcement; (2) DHS’s preference for exercising prosecutorial discretion on “a truly individualized, case-by-case basis”; and (3) the importance of “project[ing] a message” that immigration laws would be enforced against all classes and categories of alien.

The district court, however, reasoned that Nielsen’s understanding of the Duke memorandum still failed to adequately explain the decision to terminate DACA under the high standard necessitated by the APA.

Technically, Duke’s decision was based on the Fifth Circuit Court of Appeals previously finding that Deferred Action for Parents of Americans (DAPA) was unlawful based on an analysis that provided certain entitlements to undocumented immigrants under the program. The Fifth Circuit, however, noted that DAPA’s forbearance provisions–executive decisions not to deport parents of Dreamers–were not at issue in the case before them. Duke, however, based on an opinion issued by then-Attorney General Jeff Sessions, used the DAPA ruling to declare all of DACA illegal as well.

Roberts categorized their argument like this: “Duke rested the rescission on the conclusion that DACA is unlawful. Period.”

But under the APA, that’s not nearly enough.

Under the somewhat arcane rules for determining the legality of an agency action, courts will typically look to determine whether such an action was “arbitrary and capricious,” which, while hotly disputed even among Supreme Court justices, is a legal term of art.

The basic test for such a determination is as follows:

Normally, an agency [decision] would be arbitrary and capricious if the agency has [1] relied on factors which Congress has not intended it to consider, [2] entirely failed to consider an important aspect of the problem, [3] offered an explanation for its decision that runs counter to the evidence before the agency, or [4] is so implausible that it could not be ascribed to a difference in view or the product of agency expertise.

Here, Duke and Nielsen failed to consider important aspects of the problem, according to the court. Instead, DHS attempted to shutter the program entirely, on the basis of DAPA being illegal, without taking into account any other options.

“Had Duke considered reliance interests, she might, for example, have considered a broader renewal period based on the need for DACA recipients to reorder their affairs,” the chief justice helpfully notes–describing some hypothetical options that could have been considered. “Alternatively, Duke might have considered more accommodating termination dates for recipients caught in the middle of a time-bounded commitment, to allow them to, say, graduate from their course of study, complete their military service, or finish a medical treatment regimen. Or she might have instructed immigration officials to give salient weight to any reliance interests engendered by DACA when exercising individualized enforcement discretion.”

[The relevant case law] teaches that when an agency rescinds a prior policy its reasoned analysis must consider the “alternative[s]” that are “within the ambit of the existing [policy].” Here forbearance was not simply “within the ambit of the existing [policy],” it was the centerpiece of the policy: DACA, after all, stands for “Deferred Action for Childhood Arrivals.” But the rescission memorandum contains no discussion of forbearance or the option of retaining forbearance without benefits. Duke “entirely failed to consider [that] important aspect of the problem.”

“DACA was rescinded because of the Attorney General’s illegality determination,” the decision’s discussion concludes. “But nothing about that determination foreclosed or even addressed the options of retaining forbearance or accommodating particular reliance interests. Acting Secretary Duke should have considered those matters but did not. That failure was arbitrary and capricious in violation of the APA.”