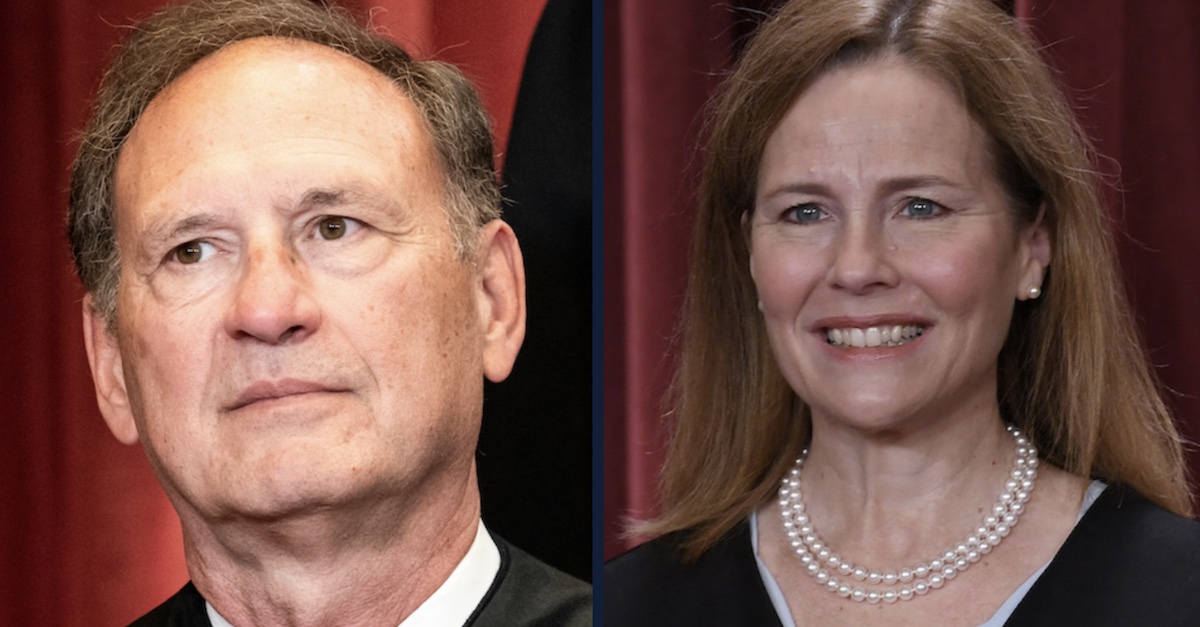 The Supreme Court heard oral arguments Monday in 303 Creative, LLC v. Elenis, the case of a Christian web designer who claims she is being “forced” by the state of Colorado to support same-sex marriage.

Lorie Smith is the owner of a Colorado website design company named 303 Creative, LLC. Colorado’s public accommodation law prohibits businesses of public accommodation from refusing to serve patrons because of their sexual orientation. Smith says in court filings that she and her company are “generally willing to create graphics or websites for lesbian, gay, bisexual, or transgender (‘LGBT’) customers,” but that she “sincerely believes, however, that same-sex marriage conflicts with God’s will.” Therefore, Smith says she plans to refuse to create websites for same-sex couples.

The case initially presented a bit of a procedural wrinkle in that Smith does not currently offer wedding-related services, and that she filed her lawsuit proactively. The U.S. Court of Appeals for the 10th Circuit agreed that Smith’s case could move forward despite its early timing, because Smith could reasonably expect to face legal jeopardy under the Colorado law. Ultimately, the 10th Circuit sided with Colorado on the case’s merits and found that the state’s public accommodation law could withstand even the highest level of legal scrutiny.

The court said that Colorado has an interest in protecting LGBTQ individuals from discrimination, and that given Colorado’s history, the risk of discrimination is especially potent in the Centennial State (the 1996 Romer v. Evans struck down an amendment to the Colorado constitution that would have specifically withheld equal protection guarantees to members of the LGBT community).

In that case, SCOTUS sided with a baker whose “sincere religious beliefs” precluded him from baking a cake for a gay couple. The ruling, though, had been a narrow one. The justices said that a custom wedding cake was a protected form of expression under the First Amendment, and that the Colorado Civil Rights Commission (“CCRC”) had been hostile to the baker’s religious beliefs. There is no such argument against the CCRC in the web-design case.

Furthermore, in the Masterpiece Cakeshop decision, then-Justice Anthony Kennedy was clear to point out that the ruling might have been different had the challenged activity been something less creative than baking a custom wedding cake. Smith’s case Monday gives the justices an opportunity to uphold Kennedy’s legacy — or not.

The marathon oral arguments Monday spanned close to three hours. During that time, the number of cringeworthy moments seemed to snowball — perhaps one reason for Justice Neil Gorsuch’s repeated references to the lengthy time frame.

Justice Elena Kagan grilled Smith’s attorney, Kristen Waggoner at length about whether a wedding-website designer is really speaking at all — a line of questioning that ran through the hours of oral argument. Kagan noted that a pair of her current clerks are engaged to be married and said that most wedding websites simply list logistical details about the wedding and tell the couple’s personal story from the couple’s point of view. Nothing in the wording of the website specifically endorses same-sex marriage.

That being the case, “it’s not really the content” Kagan told Waggoner. Kagan went on to remark that the site could promote a wedding of “Mike and Pat,” in which it is unclear whether Pat is a man or a woman.

Justices Ketanji Brown Jackson and Sonia Sotomayor continued along the same logical line, pressing Waggoner repeatedly about how Smith’s website could be considered compelled speech when she is not making any specific statements in her websites.

The first moment that stood out was Justice Amy Coney Barrett’s question for Waggoner. Barrett asked about a hypothetical cisgender heterosexual couple who came to Smith to prepare a website for their own wedding, in which they made an explicit statement that their sexual orientations and identities are “irrelevant to [their] relationship which transcends such categories.”

“Would your client publish that site?” asked the justice, apparently attempting to draw out Waggoner’s argument that her client would object to any messaging with which she disagrees, even if advanced by non-LGBTQ individuals.

Waggoner, however, struggled and answered, “Yes, assuming the marriage is between a man and a woman.”

Barrett continued her questioning and gave Waggoner a boost by presenting another hypothetical, in which a straight couple wanted to publicize their love story which included adultery.

To that, Waggoner regained composure and answered that her client would likely not publish the site, which helped Barrett land on the helpful conclusion: “It’s about the message.”

Later, Justice Jackson introduced a hypothetical that she said would test Waggoner’s suggestion that there’s “something different” if her client were to refuse services to customers based on their race. Jackson asked about a mall photographer who offered customized “Scenes with Santa” photos that sought to recapture nostalgic Christmas scenes from the 1940s and 1950s.

“But precisely because they’re trying to capture feelings of a certain era, they will only take pictures of white children,” Jackson said. She then asked Waggoner, “Why isn’t your argument that they should be able to do that?” — and commenting skeptically, “maybe it is.”

Waggoner then told Jackson that “there is a direct overlap in the musical of Hamilton.”

“In that case, we know they’re expressing a preference for who they are hiring because of race,” Waggoner continued, before Jackson cut her off.

When Waggoner spoke again, she again tried to work Hamilton into her argument. Jackson again shut Waggoner down, saying “all right, thank you,” as soon as Waggoner mentioned the Pulitzer Prize-winning play. As discussed before with respect to other cases, the Hamilton analogy is not generally useful to analysis of anti-discrimination laws, as those law generally would not apply to casting choices for a musical.

When Colorado Solicitor General Eric Olson took the podium to advocate for the state law, he pointed out that Waggoner stipulated that the Colorado law applied to her client, whereas the same would not be said for artists such as Lin-Manuel Miranda.

Justice Samuel Alito pressed Olson on the limits of his argument, and offered a set of contrasting hypotheticals involving websites for two Jewish people that wished to marry versus a Jewish person marrying a non-Jewish person. The ensuing exchange was noticed.

Following up on his own hypothetical, Alito then asked Olson about a Jewish person asking a photographer to take a photo of him for his “JDate” profile.

A seemingly confused Alito said, “JDate … is a dating service, I gather, for Jewish people.”

Justice Kagan confirmed, “It is.”

Alito then responded to much courtroom laughter, “Maybe Justice Kagan will also be familiar with the next website I’m going to mention …AshleyMadison[dot]com” — a reference to the dating website that caters to married people seeking affairs.

The uncomfortable moment was not missed by court watchers.

Alito: JDate … is a dating service, I gather, for Jewish people.

Alito: Maybe Justice Kagan will also be familiar with the next website I’m going to mention … https://t.co/zwd7n39Msh. pic.twitter.com/Y9v9xTBoIO

Slate‘s Dahlia Lithwick tweeted that she was “stunned” over the jokes.

Law Professor Melissa Murray was also surprised by the moment:

OMG! Yes. He just suggested that Kagan is on Ashley Madison, which is a website for folks that want to have affairs … what in the world???

Alito upped the ante on mall Santas by asking about “Black Santa.”

“If there is a Black Santa at the other end of the mall and he doesn’t want to have his picture taken with a child who is dressed up in a Ku Klux Klan outfit, Black Santa has to do that?” asked the justice.

Kagan jumped in to clarify that the wearing of Klan outfits would not be protected regardless of whether the wearer were Black or white.

Alito then joked, “You do see a lot of Black children in Ku Klux Klan outfits,” all to raucous (or perhaps nervous?) laughter in the courtroom.

Attorney Sherrilyn Ifill, former president of the NAACP Legal Defense Fund, tweeted that Alito’s jokes were “so inappropriate, no matter how many in the courtroom chuckle mindlessly.”

After following the arguments, Vox’s Ian Millhiser wondered via Twitter, “Does Alito think that the sole purpose of oral argument is to troll liberals on Twitter?”

Does Alito think that the sole purpose of oral argument is to troll liberals on Twitter?

Justice Barrett later joined the fray by pitching a hypothetical: What if the New York Times chooses to exclusively highlight gay wedding announcements during Pride month?

Embedded in Justice Barrett’s hypothetical about the NYT marriage announcements is the deep conservative distrust of the NYT (which, ironically, of late has been running stuff favorable to the conservative position on this question)

Justice Sonia Sotomayor, for her part, remarked that the Supreme Court’s eventual ruling in this case could be the first time in history that SCOTUS rules a business of public accommodation could legally refuse to serve a customer based on race, sex, religion, or sexual orientation.

Oral arg in #303Creative Sotomayor: This would be the first time in the Court’s history that it would say a business open to the public could refuse to serve a customer based on race, sex, religion, or sexual orientation. Correct?