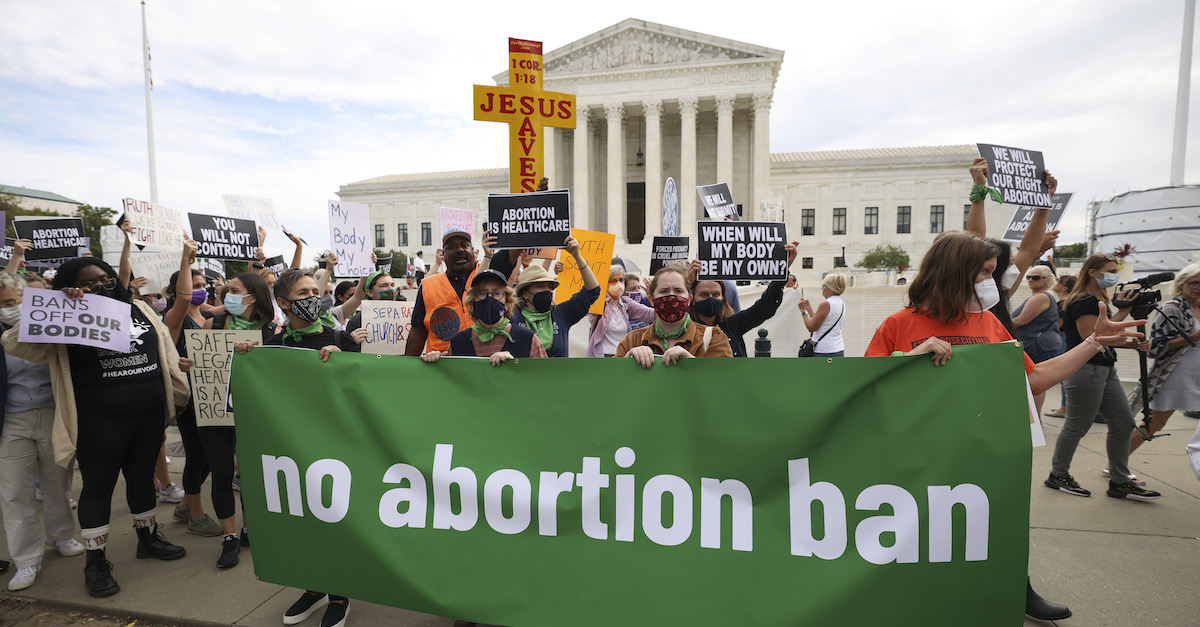 A longstanding, bitter national debate about access to abortion will again head to the Supreme Court.  The high court on Friday allowed a restrictive abortion ban in Texas to stay in place while docketing several underlying cases for oral argument.

Hanging in the balance is one of the most well-known court cases of all time: the landmark 1973 Roe v. Wade opinion which struck down several Texas laws and found that the U.S. Constitution’s “right to privacy,” enshrined in the 14th Amendment, entitles a woman to terminate her pregnancy by having an abortion.

In a pair of companion cases, the nine justices will hear arguments in U.S. v. Texas and Whole Woman’s Health v. Jackson. The former was brought by the U.S. Department of Justice challenging S.B. 8, a Texas bill that effectively banned abortions after six weeks of pregnancy through a novel legal regime that creates seemingly limitless and therefore strenuous civil liabilities for those who terminate pregnancies after cardiac activity is detectable in an embryo. The latter case was filed against that same law by a broad coalition of civil libertarians, doctors and health advocates.

As Law&Crime previously reported, the “Texas Heartbeat Act” (S.B. 8’s self-styled name) forces doctors to look for the heartbeat of a fetus before performing an abortion and provides that “a physician may not knowingly perform or induce an abortion on a pregnant woman unless the physician has determined, in accordance with this section, whether the woman’s unborn child has a detectable fetal heartbeat.” Anyone found in violation of the law–either directly or through aiding and abetting a violation–is subject to a civil judgment of at least $10,000 per abortion performed. No criminal penalty is attached to the law.

On Monday, the Biden administration filed an emergency petition asking for an administrative pause on the law while also fashioning its request as a makeshift petition for certiorari. The court denied the relief sought but accepted the DOJ’s bid to hear the case in full.

“I cannot capture the totality of this harm in these pages,” Justice Sonia Sotomayor opined in a dissent calling out her colleagues for declining to enjoin the law while the court considers the merits of the cases. “[T]he State (empowered by this Court’s inaction) has so thoroughly chilled the exercise of the right recognized in Roe as to nearly suspend it within its borders and strain access to it in other States. The State’s gambit has worked. The impact is catastrophic.”

“By refusing once again to block Texas’ horrific abortion ban, the Supreme Court is sending an alarming signal that it will stand idly by while our reproductive rights are violated, a reality Texans are too familiar with after living under the nation’s most extreme abortion ban for nearly two months,” Brigitte Amiri, deputy director of the ACLU Reproductive Freedom Project, said in a statement. “This cruel law has had devastating consequences, with the impact hitting marginalized communities the hardest. This is a dire moment, and we’ll do everything in our power to fight back against attacks on our reproductive rights before it’s too late.”

Some Democratic politicians appeared to suggest the eventual decision from the conservative court is something of a fait accompli.

“The Supreme Court just agreed to take up the Texas abortion law — a law that’s in direct opposition to Roe v. Wade,” noted New York Gov. Kathy Hochul. “I’ve said it before & I’ll say it again: New York is your safe harbor. We’ll protect your rights, we’ll help you however we can, & we’ll keep fighting for you.”

“Roe v. Wade and the right to an abortion is fundamental in TX, PA, + across the country,” Pennsylvania Lieutenant Governor and U.S. Senate candidate John Fetterman added. “People should have control over their own bodies and their own lives. Period.”