‘Resign’: AOC Ratchets Up Calls for Impeachment of Justice Thomas After Revelations of His Wife’s Post-Election Texts 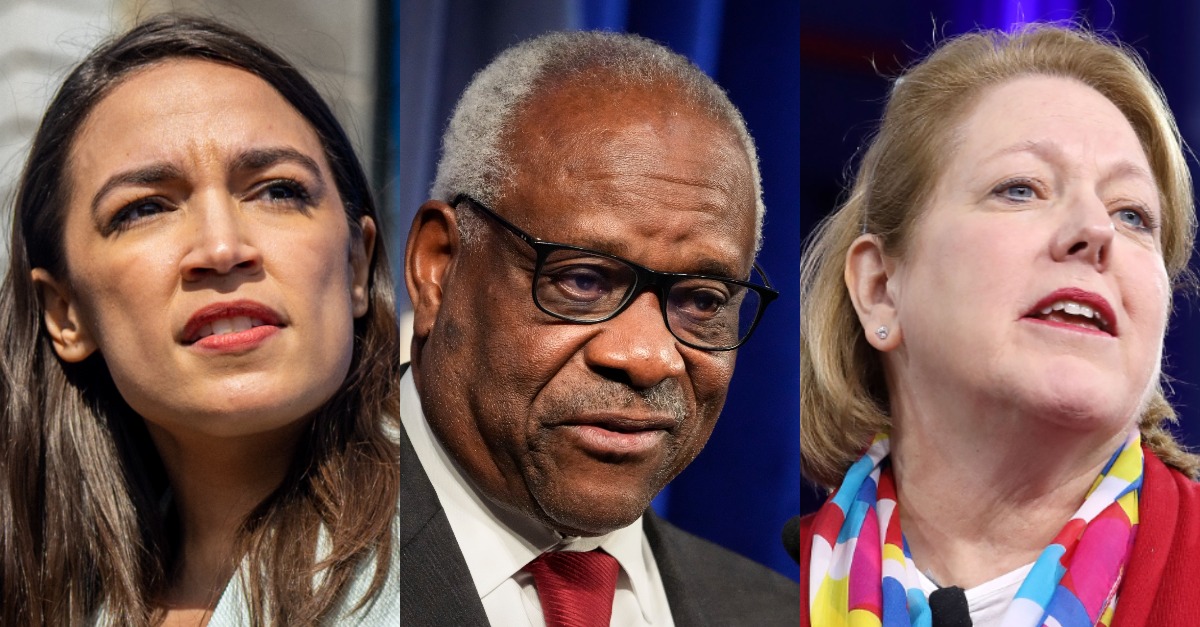 Democrats in Congress have taken an increasingly aggressive stance this week in response to revelations that Virginia “Ginni” Thomas, wife of Justice Clarence Thomas, sent text messages to former White House chief of staff Mark Meadows urging him to try and overturn the results of the 2020 presidential election.

On Tuesday, Rep. Alexandria Ocasio-Cortez (D-N.Y.) joined the fray with a political ultimatum: telling Justice Thomas to resign or else face the prospect of impeachment in the U.S. House of Representatives.

“Clarence Thomas should resign,” the Bronx-based democratic socialist tweeted. “If not, his failure to disclose income from right-wing organizations, recuse himself from matters involving his wife, and his vote to block the Jan 6th commission from key information must be investigated and could serve as grounds for impeachment.”

On March 24, the Washington Post published an explosive exposé that revealed Ginni Thomas called President Joe Biden’s election the “greatest Heist in our History” and endorsed a series of bizarre and unhinged conspiracy/legal theories about the 2020 contest between the 46th president and former President Donald Trump.

In sum, Thomas and Meadows exchanged at least 29 text messages discussing efforts and theories to invalidate, and cast aspersions about, Biden’s Electoral College victory over Trump. Those messages came between Election Day 2020 and the days immediately after the Jan. 6th, 2021 attack on the U.S. Capitol Complex.

The Post reported that Thomas appeared to latch onto various QAnon-style narratives in the aftermath of the election–including one fanciful scenario in which foes of Trump would be sent to “GITMO” via forcible abduction by state security agents and then subjected to military tribunals during an event known as “The Storm.”

After his wife made repeated efforts to have Trump’s chief of staff overturn the election, Justice Thomas suggested the nation’s high court was wrong to avoid considering that were geared towards overturning the election outcome.

In one case, Trump v. Thompson, Thomas was the lone justice to publicly dissent from the Supreme Court’s decision allowing the Jan. 6th Committee to access hundreds of pages of White House records that concern the failed Trumpworld effort to overturn the election.

Ocasio-Cortez’s call for the conservative jurist’s resignation comes on the same day that 22 Democratic Party senators and representatives penned an open letter demanding an explanation from Thomas over his “potential violation of federal ethics law” for his “failure to recuse” from those aforementioned Supreme Court decisions.

“Justice Thomas’s participation in cases involving the 2020 election and the January 6th attack is exceedingly difficult to reconcile with federal ethics requirements,” the lawmakers write in the letter.

“Justice Thomas has neither disclosed the extent of his knowledge about Ms. Thomas’s activities nor recused himself from multiple Court cases involving the 2020 election and the attempted insurrection that followed,” the letter continues. “In fact, Justice Thomas was the sole dissenting Justice who would have blocked the January 6th Committee’s access to presidential records involving the Trump Administration’s efforts to disrupt the peaceful transfer of power — records that could very well contain communications between Ms. Thomas and top White House officials given what we now know.”

The Supreme Court, notably, does not have a code of ethics. Its members are not subject to any sort of rules or judicial codes of conduct similar to those governing all other judges in the country.

That letter, helmed by Sen. Elizabeth Warren (D-MA) and Rep. Pramila Jayapal (D-WA) is stacked with members of the Senate and House judiciary committees–21 out of the 22 signatories are on those committees–suggesting there may be some appetite among Democrats for an investigation into Justice Thomas’s alleged ethical foibles.

The New York Times reported Monday that the Jan. 6 Committee is “likely” to seek an interview of Ginni Thomas.

Law&Crime reached out to the Supreme Court Public Information Officer for comment on the resignation demand from Ocasio-Cortez. No response was forthcoming at the time of publication.

As the Supreme Court website notes, only one justice has ever been impeached, and that impeachment ended with an acquittal in the Senate:

The only Justice to be impeached was Associate Justice Samuel Chase in 1805. The House of Representatives passed Articles of Impeachment against him; however, he was acquitted by the Senate.