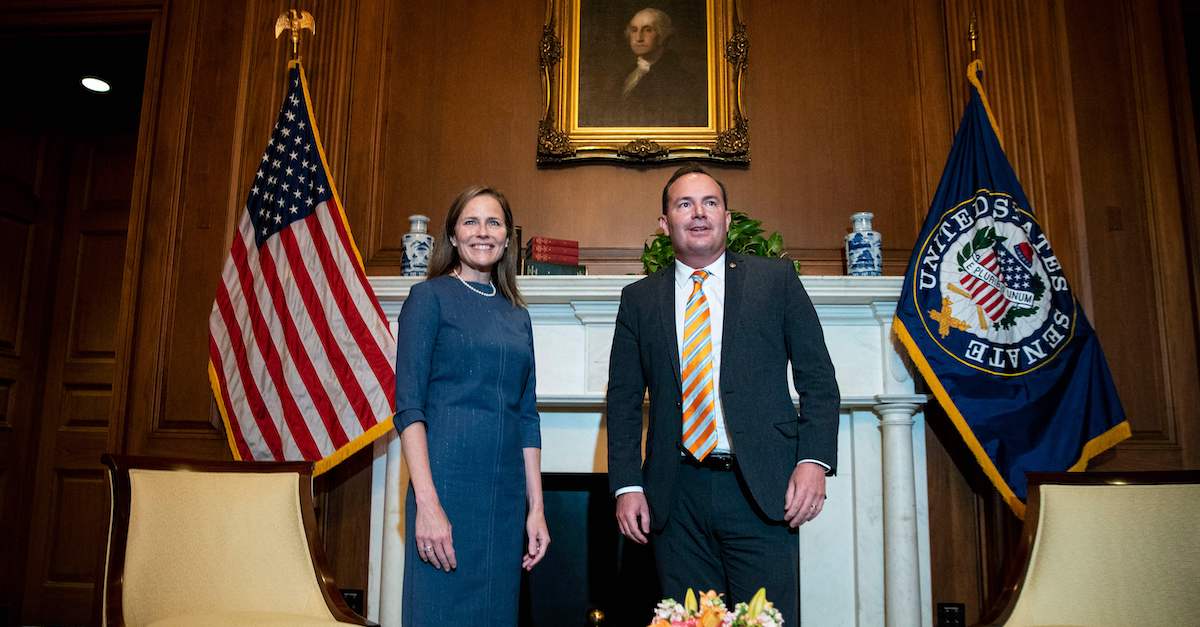 Sen. Mike Lee (R-Utah), a member of the Senate Judiciary Committee, announced on Friday that he tested positive for COVID-19—just days after he met with Supreme Court nominee Amy Coney Barrett in person.

“Out of an abundance of caution, I sought medical advice and was tested for Covid-19. Unlike the test I took just a few days ago while visiting the White House, yesterday’s test came back positive,” he said. “On advice of the Senate attending physician, I will remain isolated for the next 10 days.”

Lee also said he has “assured” Senate Majority Leader Mitch McConnell (R-Ky.) and Senate Judiciary Committee Chairman Lindsey Graham (R-S.C.) that he will be “back to work in time” to consider Judge Barrett’s nomination in Committee. Hearings are expected to begin on Oct. 12, which is, indeed, 10 days from today.

Speaking of Judge Barrett, Lee met with her as recently as Tuesday at the White House. As you can see in the picture above, they were at some points maskless and not six feet apart for photo-ops.

According to reports, Barrett tested negative for COVID-19 on Friday morning and is tested daily. The chaos began on Thursday when it was revealed that top White House aide Hope Hicks tested positive for the virus. Then, in the wee hours of the morning on Friday, President Donald Trump revealed that both he and First Lady Melania Trump had tested positive for COVID-19 and would isolate themselves accordingly.

Tonight, @FLOTUS and I tested positive for COVID-19. We will begin our quarantine and recovery process immediately. We will get through this TOGETHER!

“Tonight, @FLOTUS and I tested positive for COVID-19. We will begin our quarantine and recovery process immediately. We will get through this TOGETHER!” Trump said in a tweet the promptly sent the news cycle into overdrive.

From last Saturday's SCOTUS announcement – not a mask in sight.

In addition to the president and first lady, Sen. Mike Lee and the president of Notre Dame, who were at the event, have tested positive. pic.twitter.com/CjHBjZynDw

Other WH staff at the #SCOTUS event??? #COVID19

Now it’s being reported that Barrett contracted the virus over the summer, but recovered.

Supreme Court nominee diagnosed with coronavirus this summer but has since recovered… https://t.co/mjbEFtkftt