Man Accused of Attempting to Murder a Justice Asked on Reddit if ‘Kavanaugh Being Removed’ Would ‘Help Women Long Term’: Feds 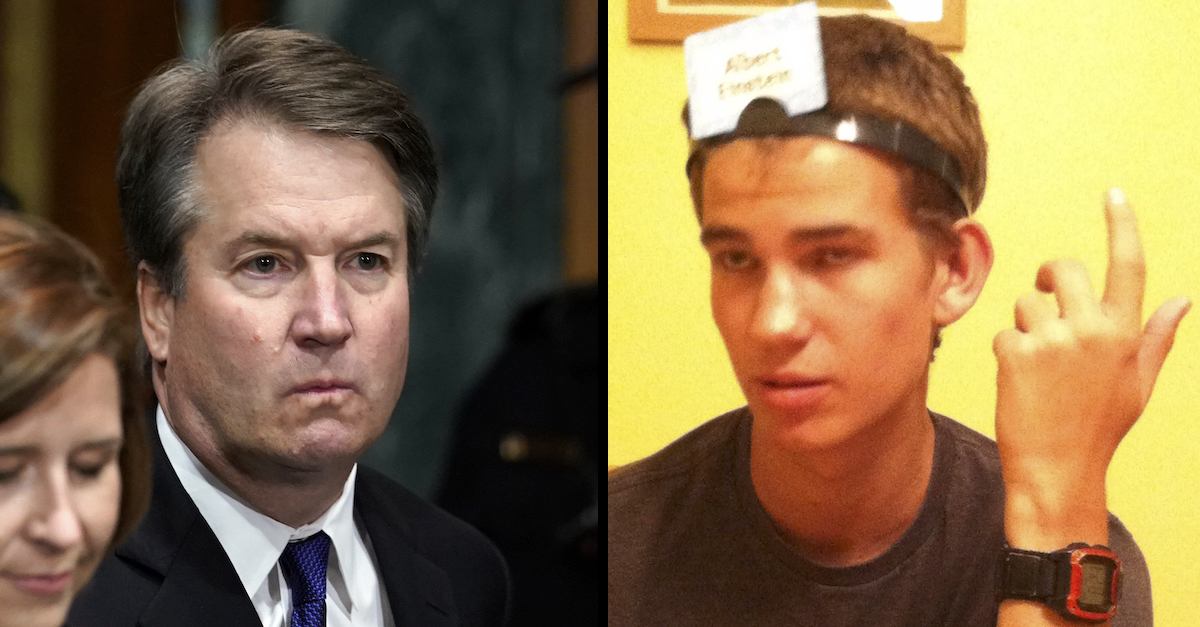 Roske called 911 on himself as he approached Kavanaugh’s personal home in Maryland, and he was subsequently arrested before any physical harms were inflicted.

Some of the online discussions cited in an FBI affidavit suggested that Roske wished to target three justices — not just Kavanaugh.

One of the warrant applications asserts that Roske used two Discord accounts. The first was filed using one of Roske’s many email addresses and bore the username “Sophie42#6535.”  The second account involved a different email address and operated under the username “AmericanSophie#1595.”

One of the accounts allegedly associated with Roske asked the following question on the subreddit r/TwoXChromosomes on May 10: “Would Kavanaugh being removed from the SC help women long term?”

A timeline of events proffered by the FBI states that Roske received an email from a gun range on May 25, ordered a “Snap Gun Lock Pick” on May 27, and attempted to delete his “Sophie42” Discord account on June 6.

Also on June 6, one of Roske’s accounts allegedly asked the following on Reddit: “How difficult is it to covertly take out an HVT?”

Roske’s search history was also of interest, according to this subparagraph in the FBI affidavit:

Between May 5, 2022 and June 8, 2022, the search history on ROSKE’s cell phone included the following terms or phrases: “quietest semi auto rifle,” “Reagan assassination attempt,” “most effective place to stab someone,” “assassin skills,” “assassin equipment,” “assassinations,” “supreme court,” “how to be stealthy,” “gun lubricant,” and “supreme court” among other things.

Roske also allegedly read the Supreme Court’s official biographies of the justices and a list of “assassination” on Wikipedia.

Someone with whom Roske allegedly communicated on Discord provided the FBI with access to a chat log.  The “someone” who talked to Roske online is referenced only as “Person #1” in the affidavit:

ROSKE:  remove some people from the supreme court

ROSKE:  after you mean?

Person #1:  oh haha good one
Two dead judges ain’t gonna do nothing
The whole government is fucked
There’s no fixing that
You would die before you killed them all

ROSKE:  yeah but I could get at least one, which would change the votes for decades to come, and I am shooting for 3
all of the major decisions for the past 10 years have been along party lines so if there are more liberal than conservative judges, they will have the power

Roske also allegedly spoke with a so-called “Person #2,” but the chat logs currently referenced by the FBI are believed by federal agents to be incomplete.  The search warrant application seeks to unravel more of the conversations.

Another of the warrant applications seeks to search Roske’s cell phone. The final four digits are listed as “8733” in one section of the application; elsewhere the last digits are listed as “8773.” Despite the transposition of the digits, there appears to be but one phone, and it is allegedly the same device Roske is said to have used to call 911 as he approached Kavanaugh’s home at about 1:05 a.m. on June 8, 2022 “dressed in black clothing and carrying a backpack and a suitcase.”

During the 911 call, Roske “informed the call taker that he was having suicidal thoughts and had a firearm in his suitcase,” the warrant affidavit says. The defendant “also told the call taker he came from California to kill a specific United States Supreme Court Justice,” according to that same document.

The affidavit says Roske was arrested “without incident” while still on the phone with the local 911 center. A search of his “suitcase and backpack revealed a black tactical chest rig and tactical knife, a Glock 17 pistol with two magazines and ammunition, pepper spray, zip ties, a hammer, screwdriver, nail punch, crowbar, pistol light, duct tape, hiking boots with padding on the outside of the soles, and other items.”

The document then recaps the defendant’s alleged schemes and motives:

ROSKE then told the detective that he was upset about the leak of a recent Supreme Court draft decision regarding the right to abortion as well as the recent school shooting in Uvalde, Texas. ROSKE indicated that he believed the Justice that he intended to kill would side with Second Amendment decisions that would loosen gun control laws. ROSKE stated that he began thinking about how to give his life a purpose and decided that he would kill the Supreme Court Justice after finding the Justice’s Montgomery County address on the Internet. ROSKE further indicated that he had purchased the Glock pistol and other items for the purpose of breaking into the Justice’s residence and killing the Justice as well as himself.

The document then says Roske admitted to using his laptop, Google, Reddit, and Discord to crowdsource advice about carrying out his plot:

ROSKE stated that he had researched the location of the Justice’s house and how to carry out his plan on an Acer laptop. ROSKE also stated that he used Reddit, Google, and other online forums to learn the skills he thought were necessary to complete his plan. ROSKE stated he had a Discord account but that he deleted the account on Sunday, June 5, 2022. ROSKE said that he used his Reddit account to ask individuals, who were unknown to him, questions in order to refine his plan to kill the Justice. ROSKE also stated that on Sunday June 5, 2022, or Monday, June 6, 2022, he attempted to use the settings menu on the Acer laptop to conduct a data wipe of the device because ROSKE did not want anyone he conversed with implicated as a result of his actions.

The document seeks a search warrant to examine the phone for evidence of the alleged crimes and provides a list of information the FBI hopes to extract from the device.

Among that data might be evidence of Roske’s “travel to Maryland, to include maps of the Montgomery County, Maryland and Washington D.C. areas.” Also included might be “information related to the identities, locations, and political affiliations and views of Justices of the United States Supreme Court.”

Roske has pleaded not guilty to an indictment which accuses him of one count of attempting to assassinate a justice of the united states.