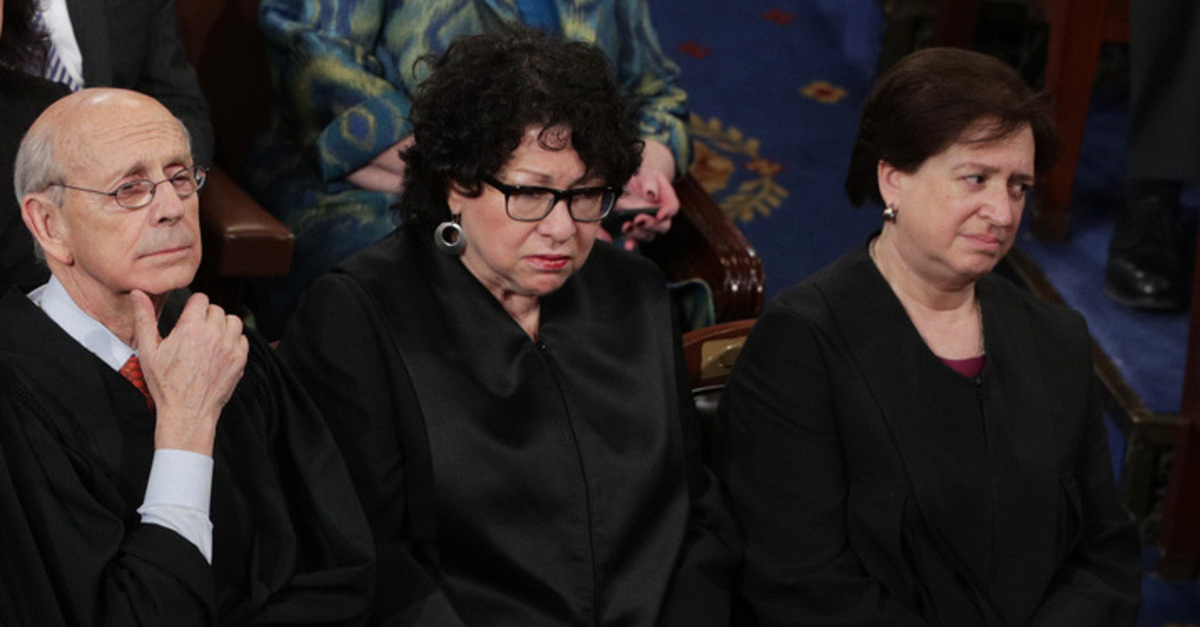 Justice Samuel Alito‘s 6-3 majority opinion in Dobbs v. Jackson Women’s Health Organization held that there was no federal constitutional right to an abortion and that states could therefore regulate and criminalize the procedure if their legislatures so chose.

Women, perforce, stood at the forefront of the concerns leveled by the trio of dissenters in response to the Roberts Court’s explicit denial of the right to choose an abortion under the U.S. Constitution.

“Respecting a woman as an autonomous being, and granting her full equality, meant giving her substantial choice over this most personal and most consequential of all life decisions,” the dissent argued – saying the now-discarded precedents were former high court efforts to strike a “balance” between women’s rights and states’ interests in protecting the “life of the fetus that may become a child.”

“Today, the Court discards that balance,” the dissent continued. “It says that from the very moment of fertilization, a woman has no rights to speak of. A State can force her to bring a pregnancy to term, even at the steepest personal and familial costs.”

The court’s left-of-center members later outlined some of those potential costs in a nightmarish list of likelihoods:

Some States have enacted laws extending to all forms of abortion procedure, including taking medication in one’s own home. They have passed laws without any exceptions for when the woman is the victim of rape or incest. Under those laws, a woman will have to bear her rapist’s child or a young girl her father’s—no matter if doing so will destroy her life. So too, after today’s ruling, some States may compel women to carry to term a fetus with severe physical anomalies — for example, one afflicted with Tay-Sachs disease, sure to die within a few years of birth. States may even argue that a prohibition on abortion need make no provision for protecting a woman from risk of death or physical harm.

A State can of course impose criminal penalties on abortion providers, including lengthy prison sentences. But some States will not stop there. Perhaps, in the wake of today’s decision, a state law will criminalize the woman’s conduct too, incarcerating or fining her for daring to seek or obtain an abortion. And as Texas has recently shown, a State can turn neighbor against neighbor, enlisting fellow citizens in the effort to root out anyone who tries to get an abortion, or to assist another in doing so.

“States have already passed such laws, in anticipation of today’s ruling,” the dissent noted. “More will follow.”

RELATED: Now that SCOTUS Has Overruled Roe v. Wade, ‘Trigger Laws’ Are Going into Effect — Here’s What You Should Know

Breyer, Sotomayor, and Kagan further noted that the conservative majority’s ruling in Dobbs will place particular burdens on poor women.

“Today’s decision, the majority says, permits ‘each State’ to address abortion as it pleases,” the dissent said. “That is cold comfort, of course, for the poor woman who cannot get the money to fly to a distant State for a procedure. Above all others, women lacking financial resources will suffer from today’s decision.”

The post-Roe suffering of women, however, has just begun, the dissent opined. The three liberal justices categorized the majority opinion as a Pandora’s box of legal curses that are likely to further erode and disfigure women’s rights via a series of successive laws and lawsuits:

The majority says a law regulating or banning abortion “must be sustained if there is a rational basis on which the legislature could have thought that it would serve legitimate state interests.” And the majority lists interests like “respect for and preservation of prenatal life,” “protection of maternal health,” elimination of certain “medical procedures,” “mitigation of fetal pain,” and others. This Court will surely face critical questions about how that test applies. Must a state law allow abortions when necessary to protect a woman’s life and health? And if so, exactly when? How much risk to a woman’s life can a State force her to incur, before the Fourteenth Amendment’s protection of life kicks in? Suppose a patient with pulmonary hypertension has a 30-to-50 percent risk of dying with ongoing pregnancy; is that enough? And short of death, how much illness or injury can the State require her to accept, consistent with the Amendment’s protection of liberty and equality? Further, the Court may face questions about the application of abortion regulations to medical care most people view as quite different from abortion. What about the morning-after pill? IUDs? In vitro fertilization? And how about the use of dilation and evacuation or medication for miscarriage management?

And, why, the dissent asks, are Alito and his fellow conservatives intent on more-or-less ensuring a raft of additional litigation?  The dissent said it now anticipates cases involving “hotly contested issues, including moral and philosophical ones, that the majority criticizes Roe and Casey for addressing.”

“In the end, the majority throws longstanding precedent to the winds without showing that anything significant has changed to justify its radical reshaping of the law,” the dissent further opined.

The dissent was quite explicit here:

Power, not reason, is the new currency of this Court’s decisionmaking. Roe has stood for fifty years. Casey, a precedent about precedent specifically confirming Roe, has stood for thirty. And the doctrine of stare decisis — a critical element of the rule of law — stands foursquare behind their continued existence. The right those decisions established and preserved is embedded in our constitutional law, both originating in and leading to other rights protecting bodily integrity, personal autonomy, and family relationships. The abortion right is also embedded in the lives of women — shaping their expectations, influencing their choices about relationships and work, supporting (as all reproductive rights do) their social and economic equality. Since the right’s recognition (and affirmation), nothing has changed to support what the majority does today. Neither law nor facts nor attitudes have provided any new reasons to reach a different result than Roe and Casey did. All that has changed is this Court.

Breyer, Sotomayor, and Kagan warned that women’s rights were likely just the beginning of right-affirming precedents on the chopping block.

“[N]o one should be confident that this majority is done with its work,” the dissent predicted. “The right Roe and Casey recognized does not stand alone. To the contrary, the Court has linked it for decades to other settled freedoms involving bodily integrity, familial relationships, and procreation. Most obviously, the right to terminate a pregnancy arose straight out of the right to purchase and use contraception. In turn, those rights led, more recently, to rights of same-sex intimacy and marriage.”

The majority took issue with the idea that the conservative court might be gunning for other rights conservatives generally oppose. Alito insisted that his Dobbs opinion was strictly limited to abortion. The dissent registered some doubt with that argument because the majority’s “lone rationale” for undoing Roe and Casey is that the right to an abortion is not “deeply rooted in history.”

“So one of two things must be true,” the dissent says. “Either the majority does not really believe in its own reasoning. Or if it does, all rights that have no history stretching back to the mid 19th century are insecure. Either the mass of the majority’s opinion is hypocrisy, or additional constitutional rights are under threat. It is one or the other.”

The dissent also heaped a notable amount of disdain onto a concurrence penned by Justice Brett Kavanaugh. In that concurrence, Kavanaugh sought to cast his opinion as straddling a line and insisted his vote to get rid of the right to abortion had nothing to do with abortion at all; rather, he characterized it is simply as vote in favor of states’ rights.

“[T]he Court acts neutrally when it protects the right against all comers,” the three justices argued. “And to apply that point to the case here: When the Court decimates a right women have held for 50 years, the Court is not being ‘scrupulously neutral.’ It is instead taking sides: against women who wish to exercise the right, and for States (like Mississippi) that want to bar them from doing so. JUSTICE KAVANAUGH cannot obscure that point by appropriating the rhetoric of even-handedness. His position just is what it is: A brook-no-compromise refusal to recognize a woman’s right to choose, from the first day of a pregnancy.”

The historical, watershed nature of Friday’s decision prompted a sharp departure from more mundane court traditions, in terms of form, as well; the dissent did not have a single author but is jointly attributed to all three of the court’s left-leaning members. The trio also wrote with a distinct sadness – jettisoning the typical “respectfully” sign-off in dissent.

“With sorrow — for this Court, but more, for the many millions of American women who have today lost a fundamental constitutional protection — we dissent.”