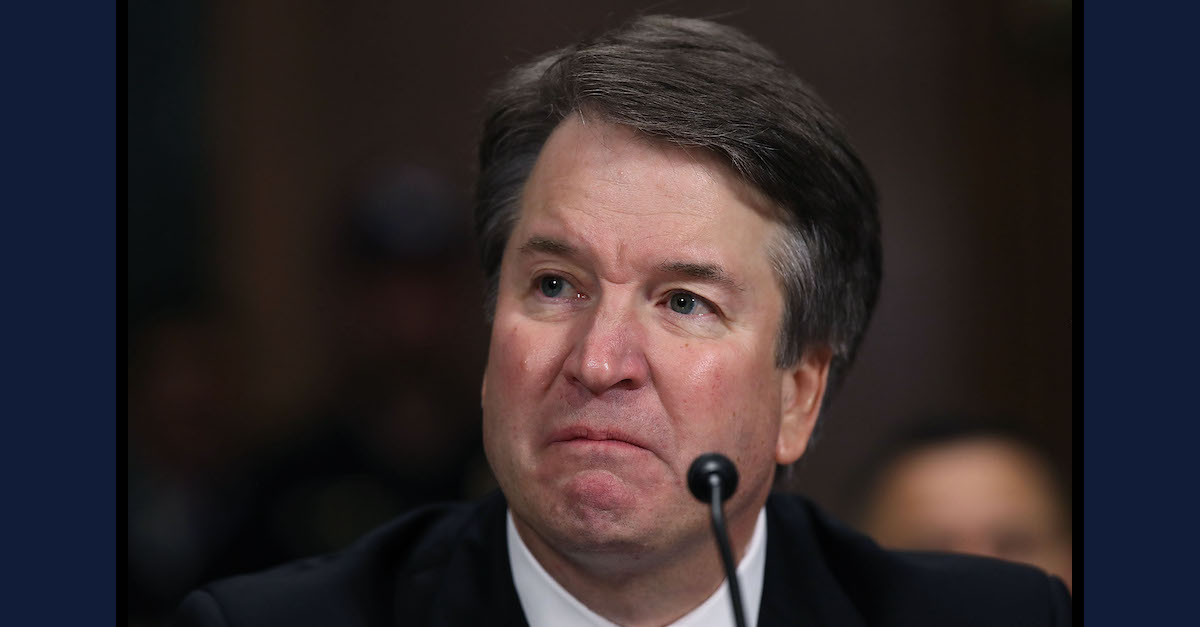 Then-Judge Brett Kavanaugh was photographed during confirmation hearings on Capitol Hill on September 27, 2018 in Washington, D.C.

Politico reported Friday that Supreme Court Justice Brett Kavanaugh was forced to leave dinner through the rear door of a Morton’s Steakhouse on Wednesday night after protesters showed up outside and instigated calls to the manager to kick Kavanaugh out.

Daniel Lippman reported that Kavanaugh had to exit through the back door and that a Morton’s representative said “Politics . . . should not trample the freedom at play of the right to congregate and eat dinner.”

NEW: Justice Brett Kavanaugh had to exit through the rear of Morton’s on Wednesday night after DC protestors showed up out front. A Morton’s rep told me: “Politics … should not trample the freedom at play of the right to congregate and eat dinner.” https://t.co/wlA4J2nxYW pic.twitter.com/jpsfhB3JVo

One Twitter user’s post encouraging others to call Morton’s and complain about Kavanaugh’s presence was retweeted hundreds of times.

Folks should call Mortons at +1 (202) 955-5997 and tell them it’s gross they welcomed Brett Kavanaugh as a diner tonight. Men who take away womens rights should be shunned.

After the reported incident, a Morton’s representative reportedly issued a lengthier statement.

“Honorable Supreme Court Justice Kavanaugh and all of our other patrons at the restaurant were unduly harassed by unruly protestors while eating dinner at our Morton’s restaurant,” the company reportedly said. “Politics, regardless of your side or views, should not trample the freedom at play of the right to congregate and eat dinner. There is a time and place for everything. Disturbing the dinner of all of our customers was an act of selfishness and void of decency.”

The statement from the Morton’s rep: “Honorable Supreme Court Justice Kavanaugh and all of our other patrons at the restaurant were unduly harassed by unruly protestors while eating dinner at our Morton’s restaurant.” …

… “Politics, regardless of your side or views, should not trample the freedom at play of the right to congregate and eat dinner. There is a time and place for everything. Disturbing the dinner of all of our customers was an act of selfishness and void of decency.”

The reported incident set off a maelstrom on Twitter about just what “rights” were in play.

Sorry about the forced ectopic pregnancy, but this was a matter of the right to eat steak!

the right to eat dinner in peace? sounds like an unenumerated right to me and are we sure those actually exist? https://t.co/jfnfq0zWzs

The Constitution is scrupulously neutral on whether Morton’s patrons have a right to unperturbed meals https://t.co/cZSw3Ul7Qe

Many commenters referred to the irony of Kavanaugh’s having voted with the SCOTUS majority in Dobbs v. Jackson Women’s Health Organization — the recent case which overruled Roe v. Wade and held that the right to have an abortion is not guaranteed by any right to privacy or liberty guaranteed by the First Amendment. An anchoring principle of the Dobbs decision was that because abortion was not explicitly mentioned in the Constitution, it is not entitled to Constitutional protection.

“[The Roe court] held that the abortion right, which is not mentioned in the Constitution, is part of a right to privacy, which is also not mentioned,” Justice Samuel Alito wrote.

Attorney Akiva Cohen subtly invoked the privacy-demolishing aspect of the Dobbs ruling in a droll and widely misinterpreted tweet.

A lot of people in the comments are defending this, but it’s a blatant violation of Kavanaugh’s right to privacy https://t.co/KpeIAJLbXZ

According to Dobbs, the right to choose an abortion could not be extrapolated from the Constitution because it was not fully recognized as part of the country’s history and traditions.

Kavanaugh has described his judicial philosophy as “originalist,” meaning that his decisions are guided by the original meaning of the Constitution’s words. Some Twitter users mocked the response of Morton’s by suggesting that Kavanaugh had no enforceable “right” to enjoy his dinner without interruption.

As an originalist, like Brett Kavanaugh, I look to the “intent” of the Constitution’s writers to determine if a right to eat at Morton’s exists. As there were no Morton’s in 1788, it does not. Brett does, however, have a right to eat tainted, uninspected meat at a louche tavern.

Oh I’m sorry @Mortons but the right to go out and eat dinner is not explicitly written into the Constitution therefore it is not a right. Kavanaugh being an “originalist” knows this and really shouldn’t be mad abt it. Maybe he should petition the local govt to make a law. https://t.co/pbQRuRypSp

National security lawyer Bradley Moss sarcastically commented on Twitter that Kavanaugh has no “right” to eat dinner, because “The Founding Fathers never spoke of a right to eat dinner, therefore the right does not exist.”

Sorry, under the originalist reading of the Constitution there is no “right” to eat dinner. The Founding Fathers never spoke of a right to eat dinner, therefore the right does not exist. https://t.co/GJuLNjxJfD

Lawyer Ian Millhiser of Vox made a similar comment, also tweeting sarcastically: “For the record, the right to exit out the front door of a Morton’s Steakhouse without having to see people who don’t like you appears in the same provision of the Constitution that includes the Major Questions Doctrine and the Equal Dignity of the States.”

For the record, the right to exit out the front door of a Morton’s Steakhouse without having to see people who don’t like you appears in the same provision of the Constitution that includes the Major Questions Doctrine and the Equal Dignity of the States.

Millhiser’s comments reference the “major questions doctrine” — a legal principle not mentioned in the Constitution, but relied on by SCOTUS in its recent ruling against the EPA, and “Equal Dignity of the States” — the similarly implied concept that the original 13 colonies have no superior rights to other states that have since joined the union.

Another less snarky analysis that skews more true to the Dobbs holding might go like this:  the Constitution contains no explicit right to dine out, but since the history and traditions of the people of the United States have long involved outside-the-home food and fare, the Constitution does, indeed, support the right to partake of victuals at a commercial establishment.

Kavanaugh’s purported dinner woes are not the first time in recent history when Kavanaugh faced ire from angry crowds. Just after a draft of the Court’s opinion in Dobbs was leaked, protesters gathered outside several conservative justices’ homes. In response, Attorney General and blocked SCOTUS-nominee Merrick Garland directed federal law enforcement officers to provide additional security to the justices.

Since the Court’s June ruling in Dobbs, there have been increasing concerns about the justices’ safety. On July 1, Supreme Court Marshal Gail Curley (SCOTUS’s top security officer) made a formal request to Maryland Governor Larry Hogan (R) and Virginia Governor Glenn Youngkin (R) to enforce picketing laws outside the justices’ homes. Curley’s letter noted state law that prohibited people from assembling “in a manner that disrupts a person’s right to tranquility in the person’s home.”

The relationship between the Supreme Court and protesters has been a complex one. As Law&Crime has previously noted, at least one federal statute and several analogous state statutes nominally ban demonstrations against the judiciary, but some cases have challenged those types of laws on First Amendment grounds.  Additionally, in the context of abortion rights, the Supreme Court has allowed generalized protests in residential neighbors if the demonstrators do not target the specific homes of specific individuals.  Though anti-abortion demonstrators have been allowed to engage in generalized picketing in abortion providers’ neighborhoods, the analysis might come out different when a member of the judiciary is subjected to such generalized picketing.

Protest laws aside, security for sitting justices has become a priority of federal lawmakers. A week after an armed man approached Kavanaugh’s house and allegedly told 911 dispatchers that he was there to kill Kavanaugh, the House passed a bill 396-27 to increase security for justices and their families.

The Twitterverse continues to deliver commentary on Kavanaugh’s reportedly interrupted meal, as some point out the disparity between Kavanaugh’s “right” to enjoy dinner and other individual liberties SCOTUS has recently ruled against.

$5 bucks says Morton’s comped his meal but would make whatever death row inmate Kavanaugh orders to be executed next pay full price for their *last* meal. https://t.co/G8yuIVjHW0