Justice Alito Responds to ‘Annoying’ Critics of ‘Shadow Docket,’ Says There Is No ‘Dangerous Cabal’ Deciding Cases ‘in the Dead of Night’ 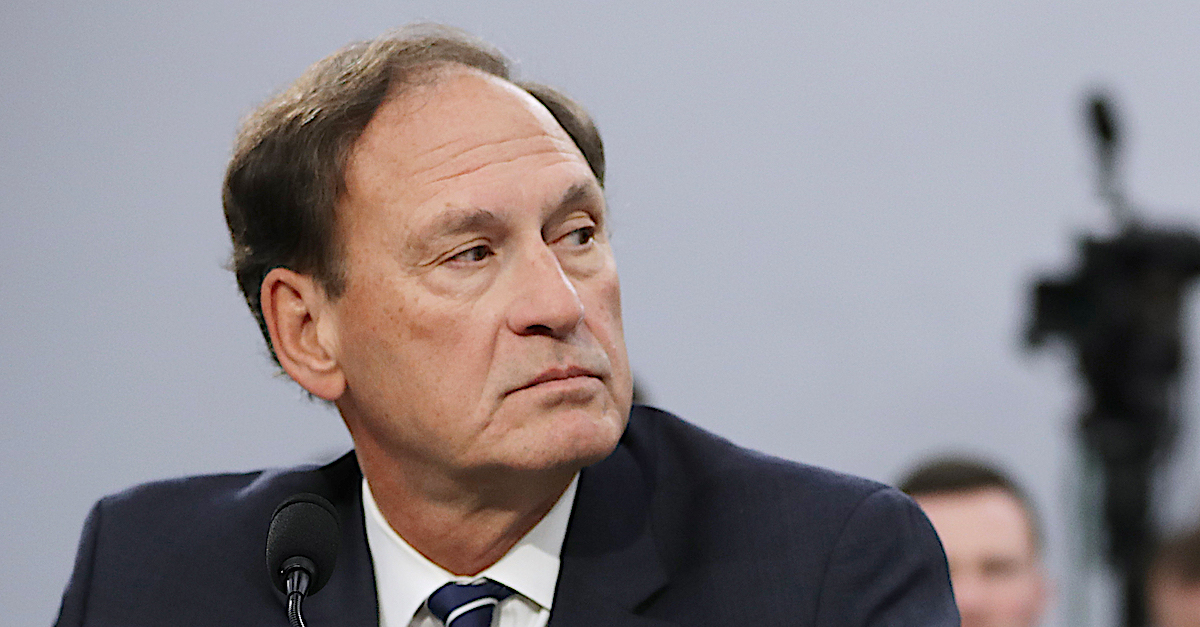 Samuel Alito appears in a file photo taken during March 7, 2019 testimony about the Supreme Court’s budget.

In an academically-toned speech at the University of Notre Dame’s Kellogg Institute for International Studies, Supreme Court Justice Samuel Alito on Thursday hit back at critics of the court’s so-called “shadow docket” — a term loosely applied to various high court procedures but mostly to the court’s disposition of emergency applications.

“Journalists and some political figures have found it useful,” Alito said. “It brings to mind something sneaky and dangerous.”

The associate justice analogized the term to a comic strip character called “The Shadow.” Alito quoted a description of the character as one who had the “hypnotic power to cloud men’s minds so they could not see him.” Alito continued with an analogy:

That’s the basic idea that the recent criticism of our shadow docket has been trying to convey:  namely, that a dangerous cabal is deciding important issues in a novel, secretive, improper way in the middle of the night hidden from public view without waiting for the lower courts to consider the issues, without proper briefing or oral argument, and without issuing full opinions. That sounds very sinister and threatening, and I’m sure when ordinary people who don’t follow the work of the Supreme Court closely hear it, they’re disturbed.

Alito said he would attempt to assuage such fears and said the court’s critics were “misleading” the public.

The justice said there are only two serious changes to the way the court handles so-called “shadow docket” applications. (Alito criticized the term but then adopted using it in his lecture.) First, the internet made it possible for the Supreme Court to immediately receive court papers from litigants and to quickly retrieve and review “the full record” of lower court papers — something that used to take considerable time in the days of paper transactions. (He also said the internet makes it possible for the justices “to communicate with each other and without clerks and with court personnel at any time of the day no matter where any of us happens to be.”) Second, he said “almost all difficult and potentially controversial emergency applications are now referred to and decided by the full court.” Previously, the single justice assigned to the originating circuit would generally decide the matter alone.

The associate justice then walked his listeners through the well-settled law of emergency petitions. The party asking for emergency relief must prove a likelihood of success, that at least four justices are likely to vote to take the case on the merits, that the high court is “likely to rule” in favor of the moving party, and that “irreparable harm” will occur while the merits of the case were being considered.

At several times during his speech, Alito bemoaned being asked to decide weighty issues quickly — sometimes in a matter of hours.

“We cannot make the world stand still,” Alito said.  “We do the best we can under the time constraints imposed by the situation.”

He likened the high court’s emergency orders with emergency medical treatment undertaken to save a severely injured patient’s life — it’s not done with the same care and concern and sterile environment that a planned surgery might entail. He said there is oftentimes not time to write full opinions in such cases given the time-sensitive nature of the matter.

Alito said “several factors” have resulted in an increased number of emergency petitions. He said lower district judges are usually “right” on the law but are “not infallible.” As an example, Alito pointed to an increase in district court injunctions against initiatives of the Donald Trump administration — initiatives which had nationwide consequences and which multiple parties believed required judicial review. He also said the 2020 election resulted in an increase in emergency applications — a situation Alito said was not uncommon in election years when individual voting rights were being questioned. “COVID contributed to an increase” in such filings in 2020, Alito said, as governors and legislatures adapted voting laws to the pandemic.

Alito then pointed to the CDC’s freeze on tenant evictions during the pandemic as one such emergency petition which would not have occurred in any normal year in recent memory — the novel coronavirus forced the court to decide the issue.

He said it “should not come to a surprise to anybody” that the Supreme Court enjoined the enforcement of a second CDC order since it had already ruled similarly previously. He said it was legally incorrect for the government to “impose that cost on landlords, many of whom were themselves in financial distress.”  Rather, he said the government could easily have ordered a plethora of freebies — laptops, high-speed internet — if it wished to pay for them, presumably through the federal government’s constitutional power to tax and spend for the general welfare.

Alito also addressed DACA and the high court’s recent decision not to block S.B. 8 — a highly criticized Texas anti-abortion statute which now allows private figures to sue abortion providers. Alito referred to the case the “most controversial” so-called “shadow docket” case the court has recently heard — and he noted that abortion providers sought an injunction a mere 36 hours before S.B. 8 took effect.

Alito expounded on the abortion decision while referring back to the other high-profile applications the court recently decided:

Now, our decisions in these three emergency matters have been criticized by those who think we should have decided them the other way. And I have no trouble with their criticism of the substance of those decisions. Fine. It’s perfectly fine; it’s productive for there to be a fair, public debate about those substantive issues. My complaint concerns all the media and political talk about our sinister shadow docket. The truth of the matter is that there was nothing new or shadowy about the procedures we followed in those cases. It’s hard to see how we could handle most emergency matters any differently, and despite all the recent criticism of the shadow docket, we have not seen many serious proposals setting out significantly different procedures that we could follow.

He then addressed 10 separate criticisms of the court’s modus operandi — the first of which he called the “silliest” and the “most annoying”: that the court has issued emergency orders “in the dead of the night” to evade public scrutiny. He said the court does not wait until “the reporters are sleeping” with the hope that the press and the public won’t notice it when it has rendered a decision. He opined that such criticism was “rank nonsense” and that the court’s doings were almost immediately reported by the press — even late at night.

He said it was also “silly” to criticize the court for issuing an increasing number of emergency opinions. He said the mathematics of the situation were merely the result of the number of increased applications to the court. He again bemoaned the “additional work” and “additional stress” emergency applications create for the justices and their staffs because such applications require the court to issue critical and complex decisions in a matter of mere hours.He said the applications oftentimes “disrupt” work on broader opinions on the merits of other cases.

Next, Alito said it was similarly ludicrous to criticize the court for deciding high-profile issues via emergency orders. He again cited recent complaints about the court’s refusal earlier this month to block Texas S.B. 8 as among his many annoyances, and he indicated that the court would decide whatever issues came its way.  In other words, the court wouldn’t turn away cases simply because they involved important matters.

The justice then quoted specific criticisms of the court’s S.B. 8 decision and noted various inaccuracies in those criticisms. Specifically, he said it was “false and inflammatory” to suggest the court “nullified Roe v. Wade” by emergency order.

“We did no such thing,” Alito reminded the audience. “We said that expressly in our order.”

He then admitted that emergency orders were made without “full briefing” or “oral argument” but said that was merely a result of time being of the essence. Alito noted that the parties requesting various emergency orders would not have time to prepare full briefs or oral arguments even if they wanted to do so.

In the case of the S.B. 8 litigation, the abortion providers didn’t even request oral argument, Alito said. He characterized oral arguments as helpful but not always necessary, generally speaking.

The justice then railed against claims that the court handled such matters with secrecy. He admitted “internal deliberations” were not public but pointed out that the court’s entire docket was online for anyone to read. He then said the court’s handling of such matters “could not be more transparent.”

Next, Alito rejected complaints that emergency matters resulted in a dearth of opinions about high-profile subjects. The justice dispatched such attacks by again pointing to the time constraints the litigants placed upon the court by the nature of the underlying requests.