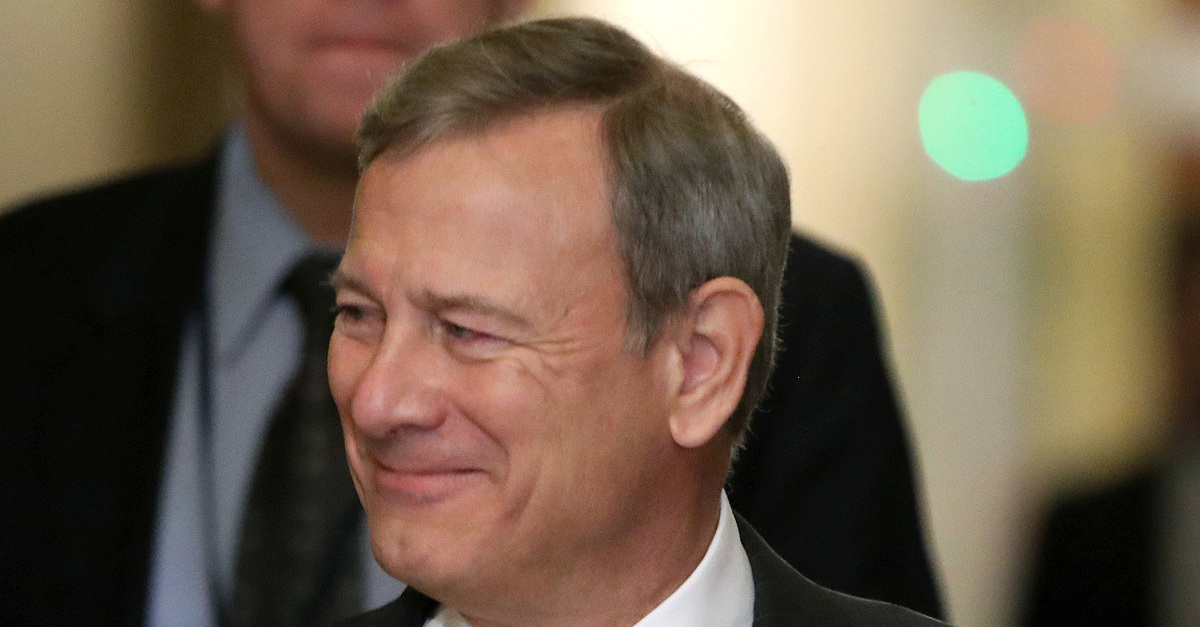 We learned for the first time on Tuesday night that Chief Justice John Roberts fell and hit his head while walking at a country club near his home on June 21, resulting in an overnight hospital stay. To repeat, the chief justice of the highest court in America was hospitalized and the public didn’t find out about it for more than two weeks. A judicial advocacy group called that an unacceptable and an unnecessary compromising of the public’s trust.

The Washington Post, citing a statement from Supreme Court spokeswoman Kathleen Arberg, confirmed last night that Roberts was “treated at a hospital on June 21 for an injury to his forehead sustained in a fall while walking for exercise near his home.”

“The injury required sutures, and out of an abundance of caution, he stayed in the hospital overnight and was discharged the next morning. His doctors ruled out a seizure. They believe the fall was likely due to light-headedness caused by dehydration,” Arberg said.

While this seriousness of the health care is not on par with those suffered, for instance, by Ruth Bader Ginsburg, Executive Director of Fix the Court Gabe Roth said Wednesday that increased transparency about the health of Supreme Court justices is in the public’s best interest.

“The Court is increasingly being drawn into the politics of the day, so anything it does, or doesn’t do, that may erode the public’s trust is concerning,” Roth said in a statement obtained by Law&Crime. “Given this dynamic, the Chief Justice shouldn’t hide the fact he cracked his head open.”

Fix the Court styles itself as a “nonpartisan organization that advocates for non-ideological ‘fixes’ that would make the federal courts, and primarily the U.S. Supreme Court, more open and more accountable to the American people.”

Roth argued that the circumstances surrounding Roberts’s nasty fall that day, as well as historical context, raised eyebrows. The 65-year-old Roberts, who was out and about at the lavish and exclusive Chevy Chase Club amid the coronavirus pandemic, said years ago that the Court’s Public Information Office would “provide health information when a need to inform the public arises.”

“The ‘need to inform the public’ is more substantial than Roberts pronounces,” Roth said. “Regular health disclosures would give us faith that our nation’s top jurists are capable of handling the rigors of their jobs, and they may even help the justices themselves reflect on their abilities to continue in their positions.”

“I’m glad Roberts is okay, but based on the way this came out, amid the court’s consistent lack of transparency, I’m appalled,” he concluded.

In this case, the Supreme Court’s Public Information Office told the public about the Roberts health scare only after the Washington Post, acting on a tip, inquired about it.

We know that Roberts has had seizures on at least two occasions—once in 2007 and once in 1993. The 2007 seizure caused Roberts to fall off a dock in Maine; the 1993 seizure happened during a golf outing.

The Supreme Court spox said that, this time, the fall was “likely” caused by dehydration. The weather on June 21 in Maryland appears to have been sunny and in the 80s.