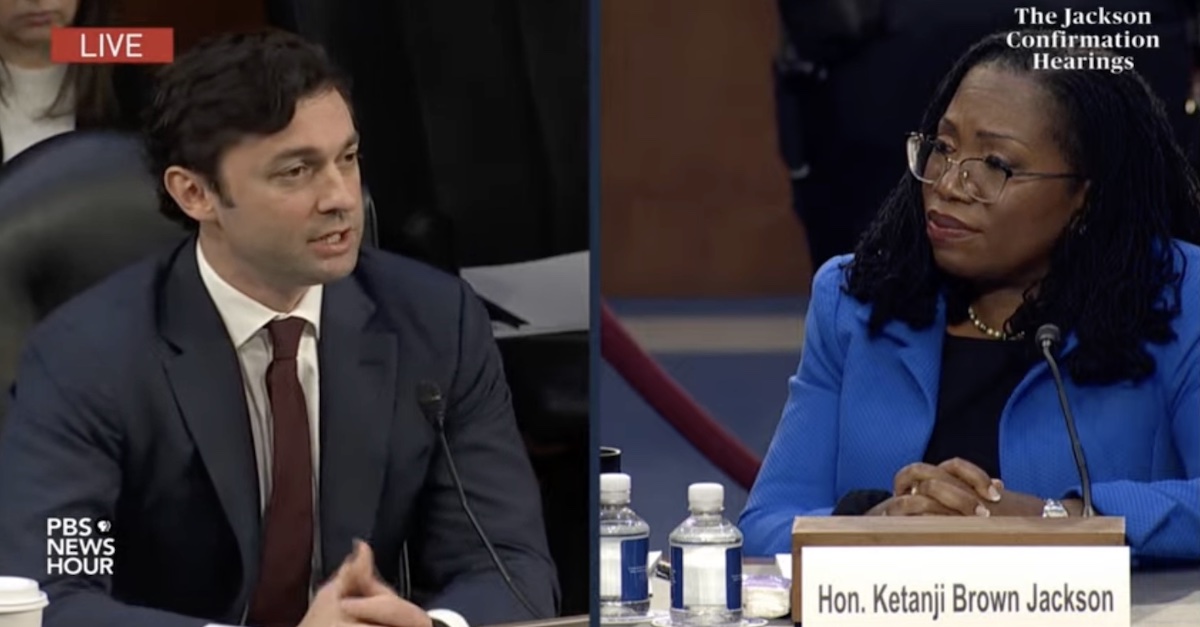 On the third day of confirmation hearings before the Senate Judiciary Committee, Supreme Court nominee Ketanji Brown Jackson took the opportunity to explain a memorable line from a 2019 opinion relating to an impeachment inquiry into then-President Donald Trump.

Democratic Georgia Sen. Jon Ossoff brought up Jackson’s opinion in a case involving former White House counsel Don McGahn, who was looking to avoid testifying before the House of Representatives about Trump in connection with the investigation into Trump’s alleged abuse of power and obstruction of Congress.

“[T]he primary takeaway from the past 250 years of recorded American history is that Presidents are not kings,” Jackson wrote at the time.

On Wednesday, Ossoff asked Jackson to expound on that statement.

“You, in an opinion that has been widely cited, made the observation that ‘presidents are not kings,'” Ossoff said. “What does that mean, and what are some of the most important bulwarks in our constitutional system against the abuse of executive power, against tyranny?”

Jackson said that the system itself is designed to protect against such abuses of power.

“Our constitutional scheme, the design of our government is erected to prevent tyranny,” Jackson said. “The framers decided, after experiencing monarchy, tyranny, and the like, that they were going to create a government that would split the powers of a monarch in several different ways. One was federalism. It was vertical, they would split the powers between the federal government and states. Another was to prevent the federal government from itself becoming too powerful, from having all of the authorities, from having legislative, executive and judicial authority concentrated in one place.”

After recapping the constitutional separation of powers—in which Article 1 grants lawmaking power to Congress, Article 2 establishes the Executive Branch, and Article 3 commands the Judiciary to interpret the laws—Jackson reiterated what she has already said multiple times during her confirmation hearings: that she is constrained by the founding document’s text.

“The separation of powers is crucial to liberty,” Jackson said. “It is what our country is founded on, and it’s important, consistent with my judicial methodology, for each branch to operate within their own sphere. That means for me the judges can’t make law. Judges shouldn’t be policymakers. That’s a part of our constitutional design and prevents our government from being too powerful and encroaching on individual liberty.”

Jackson’s language on Wednesday was more straightforward than what she wrote in the McGahn opinion. After noting that “presidents are not kings,” Jackson wrote:

This means that they do not have subjects, bound by loyalty or blood, whose destiny they are entitled to control. Rather, in this land of liberty, it is indisputable that current and former employees of the White House work for the People of the United States, and that they take an oath to protect and defend the Constitution of the United States. Moreover, as citizens of the United States, current and former senior-level presidential aides have constitutional rights, including the right to free speech, and they retain these rights even after they have transitioned back into private life.

In 2021, Jackson upheld a ruling from U.S. District Judge Tanya Chutkan that also used a variation of the memorable line.

“Presidents are not kings, and plaintiff is not President,” Chutkan wrote in November 2021 opinion denying Trump’s attempt to block the National Archives from sending documents to the House committee investigating Jan. 6.

Jackson was one of three appellate judges who affirmed Chutkan’s decision, which was similarly upheld on appeal to the Supreme Court.