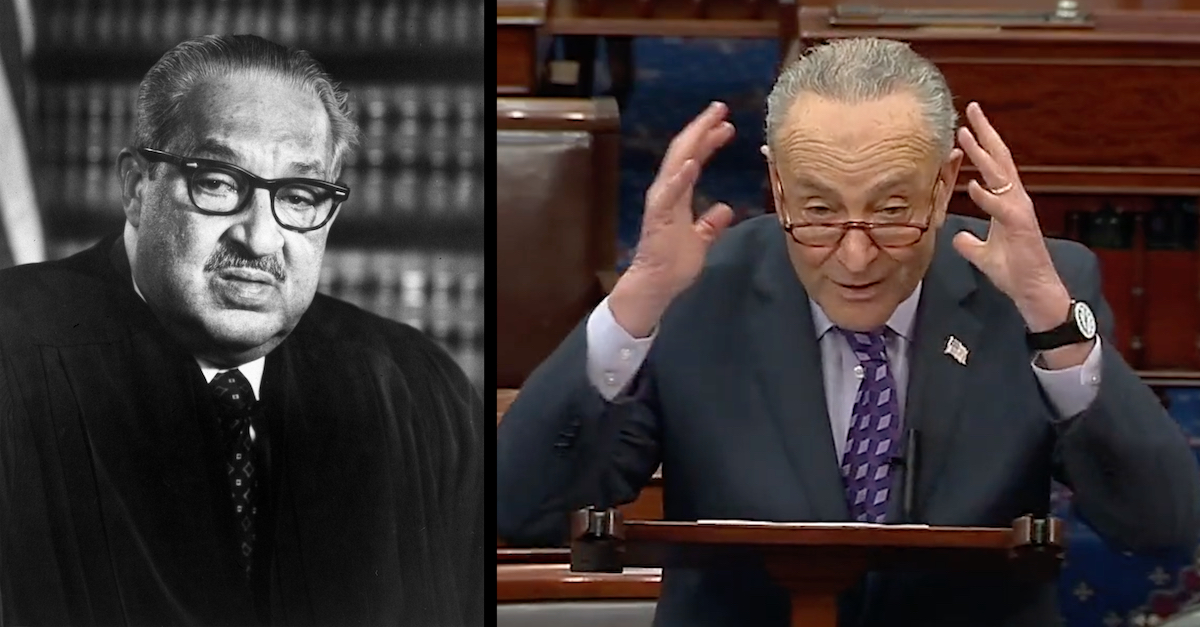 Senate Majority Leader Chuck Schumer (D-N.Y.) on Thursday tweeted an awkward mea culpa after an earlier senate floor speech glossed over a man whose legacy is critical to American history and jurisprudence.

Schumer proclaimed that the U.S. Supreme Court was composed of “all white men” prior to 1981. That is incorrect. Thurgood Marshall was the first Black justice; he joined the nation’s highest court on Aug. 30, 1967 and retired on Oct. 1, 1991.

Schumer’s speech was designed to support President Joe Biden’s “historic” pledge to nominate a Black woman to the SCOTUS seat that is in the process of being vacated by Justice Stephen Breyer. At first, Schumer said that there have been two Black justices on the Supreme Court.

“There have been 115 justices who have sat on the court since 1789,” Schumer said on the senate floor. “Only five of them have ever been women. None until 1981. Only two have been African-American, but never, never has there been an African-American woman.”

Schumer’s reference to 1981 as a transformative year for the SCOTUS bench was accurate. Ronald Reagan nominated Sandra Day O’Connor in July after promising to select the court’s first female justice; O’Connor assumed office on Sept. 25, 1981.

Schumer’s wheels came off when he started to conflate gender with race.

“Until 1981, this powerful body, the Supreme Court, was all white men,” Schumer said. “Imagine. America wasn’t all white men in 1981, or ever. Under President Biden and this Senate majority, we’re taking historic steps to make the courts look more like the country they serve by confirming highly qualified, diverse nominees.”

Parts of that statement were incorrect. The court was not composed of “all white men” prior to 1981. It was made up of “all white men” before Marshall joined the court in the summer of 1967.  Schumer remembered O’Connor in his calculation but apparently forgot about Marshall, who was the first person to break the “all white men” brethren of justices. O’Connor broke the notion of the justices as a “brethren.”

.@SenSchumer: “Until 1981, this powerful body, the Supreme Court, was all White men. Imagine. America wasn’t all White men in 1981, or ever. Under President Biden and this Senate majority, we’re taking historic steps to make the courts look more like the country they serve.” pic.twitter.com/PrEjoLrmPH

Schumer was swift to address his error on Twitter.

“Sorry that I misspoke earlier today,” the senator tweeted. “Of course, I remember the dedication and legal excellence that Thurgood Marshall brought to the Supreme Court.”

Sorry that I misspoke earlier today. Of course, I remember the dedication and legal excellence that Thurgood Marshall brought to the Supreme Court.

Schumer went on to note that one-quarter of the Black women who currently serve as federal judges were nominated this year by the Biden administration and the Democrats’ razor-thin control over the senate.

The New York Times reported in 1991 that Marshall’s departure from the court at age 82 would be a “blow to liberals.”

Marshall had been nominated to the Supreme Court by Lyndon Johnson just a few years after the Civil Rights Act was signed into law.

The Times called Marshall “a living hero of the civil rights movement and one of the last liberal voices on the Supreme Court” at the time. The newspaper noted that Marshall’s 24-year tenure “ended in mounting anger and discouragement as he watched the ascendancy of a conservative-dominated bench.”

Public pressure mounted for then-President George H. W. Bush to replace Marshall with another member of the Black community. That led in part to the nomination of Justice Clarence Thomas, the second Black person to serve on the court.

Marshall penned a famous rebuke of the then-shifting ideological makeup of the then-assembled Supreme Court justices in a dissent released the same day as his retirement announcement.

“Power, not reason, is the new currency of this Court’s decisionmaking,” Marshall wrote.

Before joining the court, Marshall argued both major iterations of Brown v. Board of Education. The court in those cases famously held that “separate but equal” public facilities were inherently unequal because they were separate — and that they therefore violated the aptly named Equal Protection Clause of the 14th Amendment. The case, which has gone down in American history as one of the high court’s most positively-received jurisprudential announcements, was won in part through the efforts of a man who was denied admission to a law school because of his skin color.