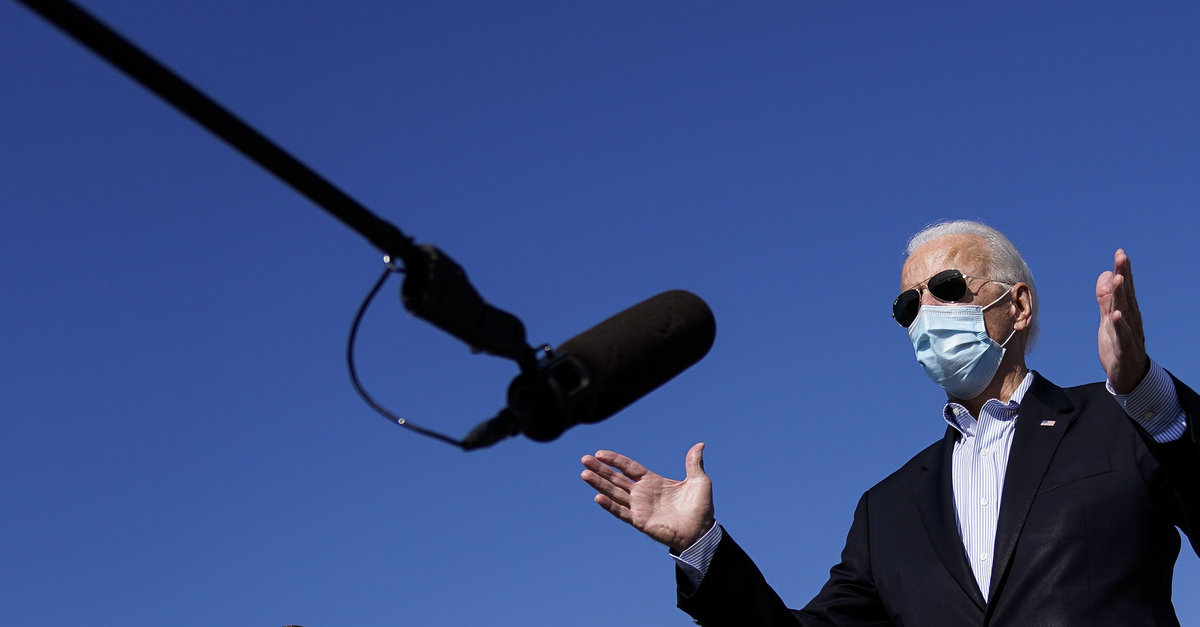 “If elected, what I will do is I’ll put together a national commission of–bipartisan commission of scholars, constitutional scholars, Democrats, Republicans, liberal, conservative,” Biden told CBS News anchor Norah O’Donnell. “And I will ask them to, over 180 days, come back to me with recommendations as to how to reform the court system because it’s getting out of whack.”

“And it’s not about court packing,” Biden added–using a pejorative but oft-used term for the legal and constitutional process of adding additional seats to the nation’s high court. “There’s a number of other things that our constitutional scholars have debated and I’ve looked to see what recommendations that commission might make.”

Critics and opponents, including President Donald Trump, have attempted, largely unsuccessfully, to fashion Biden’s until-now non-committal responses to “court packing” questions as a liability during the final weeks of the 2020 general election.

The issue previously emerged during this year’s Democratic Primary–with few of the contenders expressing interest in the idea. Even the nominally social democratic Sen. Bernie Sanders (I-Vt.), who positions himself as a “democratic socialist,” was hesitant to endorse such a move because, he said, he feared that additional additions to the undemocratic body would undermine its legitimacy in the long run.

Progressive organizations, on the other hand, were all-but unanimously skeptical of Biden’s proposal because they claimed it doesn’t go far enough–suggesting both the renewed importance structural concerns have been given in the aftermath of Ruth Bader Ginsburg’s death in late September as well as how the progressive movement appears to be passing older politicians by.

Several major organizations expressed disdain for what they perceived as Biden’s half-measure on the so-called “court packing” issue.

SCOTUS poses grave threat to democracy & in past 24 hrs, Roberts continued voter suppression as Senate R’s changed rules again to steal a seat. It’s key that need for reform is understood, but we don’t need 6 mo. of study. We just need to take Court back. https://t.co/GR3hJowE2H

“For much of the last 18 months, Joe Biden has been largely opposed to any real efforts to reform the judiciary in response to Mitch McConnell’s six-year effort to ‘block-and-pack’ the federal courts with right-wing ideologues, so it’s good to see his positions evolving to reflect the reality he’d face as president,” Democracy For America CEO Yvette Simpson said in a statement.  “That said, we don’t need to be promised a nice report about reform delivered to the White House, we need vice president Biden to assure Americans that he will take bold action to ensure our courts don’t remain dominated by a right-wing fringe installed by Mitch McConnell to attack abortion rights, destroy healthcare reform, and dismantle our democracy.”

Brian Fallon is currently the executive director of Demand Justice, a left-of-center judicial advocacy group that has expressed interest in expanding the size of the Supreme Court.

In a statement, he savaged Biden’s proposal as both lacking in substance and too long of a wait.

“We certainly do not need a commission to tell us that Republicans are on the verge of stealing their second Supreme Court seat in four years and that the Roberts Court routinely sides with voter suppression schemes that advantage the Republican party,” said Fallon, a former Hillary Clinton campaign press secretary and Obama administration Department of Justice alum–revealing the extent to which court expansion has been embraced by mainstream Democrats as of late.

“This proposed commission runs the risk of stalling momentum for serious reform,” Fallon continued. “The window when Democrats may have the power to implement Court reform may be short, and the timeline for a commission would only constrict the window further. Chief Justice Roberts has proven adept at keeping the Court’s public profile low whenever scrutiny mounts, and then resuming the Court’s rightward march when attention recedes. A commission that would allow opponents of structural reform to run out the clock is not a solution; it’s a punt.”

Republicans were also incensed about the Biden plan–for the opposite reason:

Americans do not want a fundamental transformation of the third branch of government! pic.twitter.com/1KH0L0A4dI

Senate Judiciary Chairman Sen. Lindsey Graham (R-S.C.) panned Biden’s comments as “gibberish” while also expressing unfounded “constitutional” reservations about the idea. Graham is wrong; the Supreme Court has been expanded multiple times in the past and the U.S. Constitution expressly provides for such expansions, which require only a majority vote in both houses of Congress.

Many law professors, perhaps mindful of the types of legal thinkers and members of the elite who are typically invited to serve on such commissions, appeared open to the idea.

Strong support among law professors for a bipartisan commission of constitutional scholars. Maybe the commission should include a few actual practitioners too (from academia or elsewhere). And people with experience passing actual legislation.

.@JoeBiden is doing exactly the right thing on #CourtPacking: He’s calling for a bipartisan commission to study the issue as part of a broad overview of the “out of whack” federal judicial system. It’s to report its recommendations in 180 days. https://t.co/vul1FwQgm5

Some legal commentators, however, wondered if there were actually enough Republicans who would serve in “good faith” on the proposed commission:

Who are Republicans other than Charles Fried who would actually offer good faith ideas to reform the judiciary if appointed to Biden’s commission?

On the other side of the aisle, it was assumed that the Republican commission members would only be Mitt Romney, Jeff Flake and John Kasich.

Biden’s “bipartisan commission” on the Court will include “conservatives” like Romney, Flake, and Kasich.

Still other critics dismissed the entirety of the discussion as an exercise in bureaucratic, navel-gazing fan fiction focused on, of all things, the judiciary.