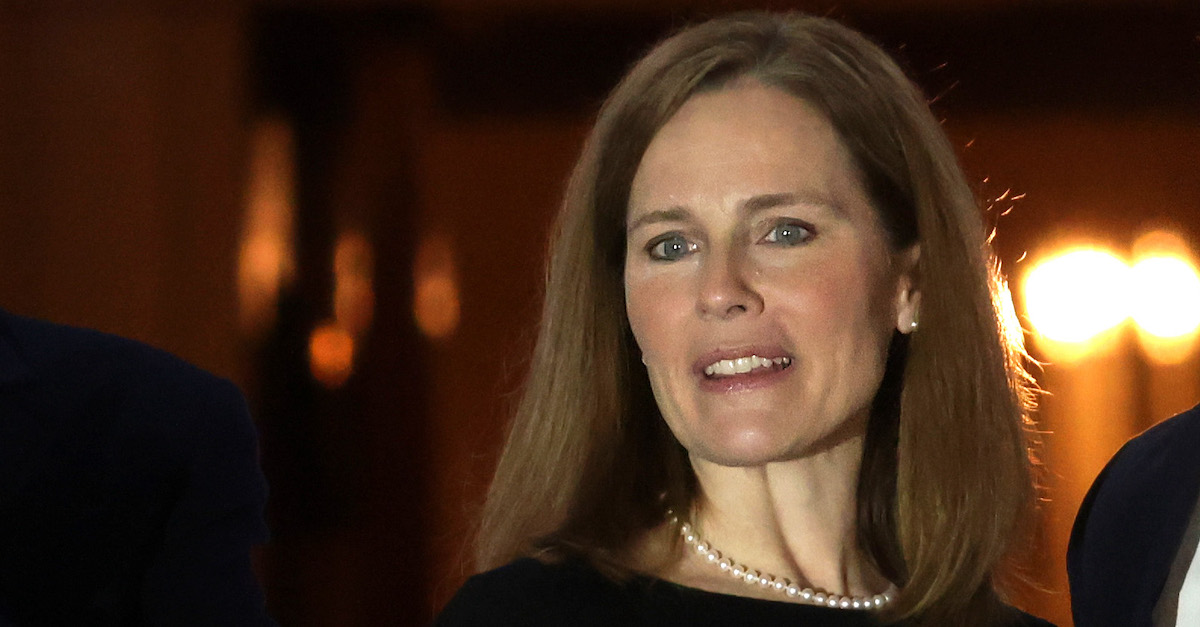 The U.S. Supreme Court on Friday sided with oil refineries in Wyoming and Oklahoma and against a consortium of renewable fuel producers in a 6-3 majority opinion by Justice Neil Gorsuch that was joined by all the other men on the life-tenured bench. The stinging dissent authored by Justice Amy Coney Barrett was joined by all of the court’s women.

Congress requires most domestic refineries to blend a certain amount of ethanol and other renewable fuels into the transportation fuels they produce. But when it first adopted these mandates, Congress temporarily exempted small refineries across the board. Looking beyond that initial period, Congress authorized individual small refineries to apply for additional hardship “extensions” from the federal government “at any time.” The question before us is whether a small refinery that manages to comply with renewable fuel mandates in one year is forever forbidden from applying for an “extension” in any future year.

The refineries in question originally received such exemptions — passed by Congress in order to ease and transition the burden toward greener-but-not-quite-green mandatory fuel blending standards — but those exemptions eventually lapsed. So, the refineries later applied for extensions and the Environmental Protection Agency (EPA) agreed. The private litigants sued by alleging that the EPA had acted “in excess of statutory jurisdiction, authority, or limitations” by granting those requests and an appeals court agreed due to the lapses.

Here’s what the statute at issue says about such extensions:

A small refinery may at any time petition [EPA] for an extension of the exemption under subparagraph (A) for the reason of disproportionate economic hardship.

The majority opinion premises the refineries’ win on a textual reading of the above statute.

“The Tenth Circuit didn’t just hold that an extension means an increase in time—it imposed a continuity requirement,” Gorsuch notes. On that court’s view, a small refinery becomes permanently ineligible for a further extension of time once its exemption lapses.”

Six justices disagreed with the appeals court here because, in their view, the statute “nowhere commands a continuity requirement.”

“[S]mall refineries whose exemptions have lapsed in one year may still seek an ‘extension’ in a following year,” Gorsuch held — thus endorsing the companies’ positions. “Indeed, the small refineries candidly characterize this as their stronger argument for reversal. We agree. It is entirely natural — and consistent with ordinary usage — to seek an ‘extension’ of time even after some lapse.”

Think of the forgetful student who asks for an “extension” for a term paper after the deadline has passed, the tenant who does the same after overstaying his lease, or parties who negotiate an “extension” of a contract after its expiration. Perhaps for reasons like these, the respondents and court of appeals are unable to point to a single dictionary definition of the term “extension” requiring unbroken continuity.

Couching the high court’s finding in the dominant worldview of the long-conservative court — textualism — Gorsuch per force makes pains to insist that his reading of the relevant statute is the most “natural.” His position was eventually hotly disputed by his fellow would-be textualist Barrett.

“[F]airly read, the key phrase at issue before us — ‘A small refinery may at any time petition the Administrator for an extension of the exemption under subparagraph (A) for the reason of disproportionate economic hardship’ — simply does not contain the continuity requirement the court of appeals supposed,” the Gorsuch-led majority concluded. “Instead, more naturally, it means exactly what it says: A small refinery can apply for (if not always receive) a hardship extension ‘at any time.'”

Not so, says Barrett in a lengthy dissent joined by more progressive Justices Sonia Sotomayor and Elena Kagan.

“The statute’s text and structure direct a clear answer: EPA cannot ‘extend’ an exemption that a refinery no longer has,” the dissent argues. “Because the Court’s contrary conclusion caters to an outlier meaning of ‘extend’ and clashes with statutory structure, I respectfully dissent.”

Barrett goes on to repeatedly chide the majority’s decision to, in her view, abandon textualist principles by foregoing “the obvious answer.”

“The Court points out that the word ‘extension’ ‘can’ or ‘may’ be used to refer to post-lapse renewals,” the dissent notes. “And because the statute thus ‘commands’ no ‘continuity requirement,’ the Court concludes that HollyFrontier’s reading must be right — which means that EPA can provide an ‘extension’ of an exemption that is no longer in effect.”

Casting this interpretation as far from natural, Barrett and the other women justices recoiled at the logical leaps made by the putative textualist Gorsuch and the rest of the men who pinned their understanding on “the outer limits of a word’s definitional possibilities” in order to find a favorable ruling for the hydrocarbon companies here.

Dictionary definitions are front-and-center in the battle between the two textualists as they both scramble for the crown of late justice Antonin Scalia.

And the dissent offers numerous hypotheticals of its own:

Consider a hotel guest who decides to spend a few more days on vacation. That guest likely would ask to “extend [her] visit.” Random House Webster’s Unabridged Dictionary 684 (2d ed. 2001) Now suppose the same guest returns to the same hotel three years later and, upon arrival, requests to “extend” her prior stay. The hotel employee would no doubt “scratch her head.” Why? Because it is highly unnatural to speak of “extending” a stay that ended years before.

Similar examples spring readily to mind. One would not normally ask to “extend” a newspaper subscription long after it expired. Or request, after child number two, to “extend” the parental-leave period completed after child number one. Or report that an athlete signed a contract “extension” with her first team after spending several seasons with a rival squad. These examples do not derive their force by superimposing a “continuity requirement” on the word “extend.” Instead, continuity is inherent in the way that people usually use the word “extension”—namely, to reference something currently “in existence” such that there is a “continuing connection with the thing to be extended.” Brief for Federal Respondent 21. That is so, moreover, absent any additional “modifying language” requiring the “extension” to be “‘consecutive’” or “‘successive.’”

“Boiled down, the Court’s position is that HollyFrontier wins because its reading is possible,” Barrett argues at another point — essentially smearing Gorsuch as a traitor to the cause. “But I would ask, as we typically do, how the term ‘extension’ ‘is most naturally read.’ The Tenth Circuit’s answer to that question is spot on: The ‘ordinary definitions of “extension,” along with common sense, dictate that the subject of an extension must be in existence before it can be extended.'”