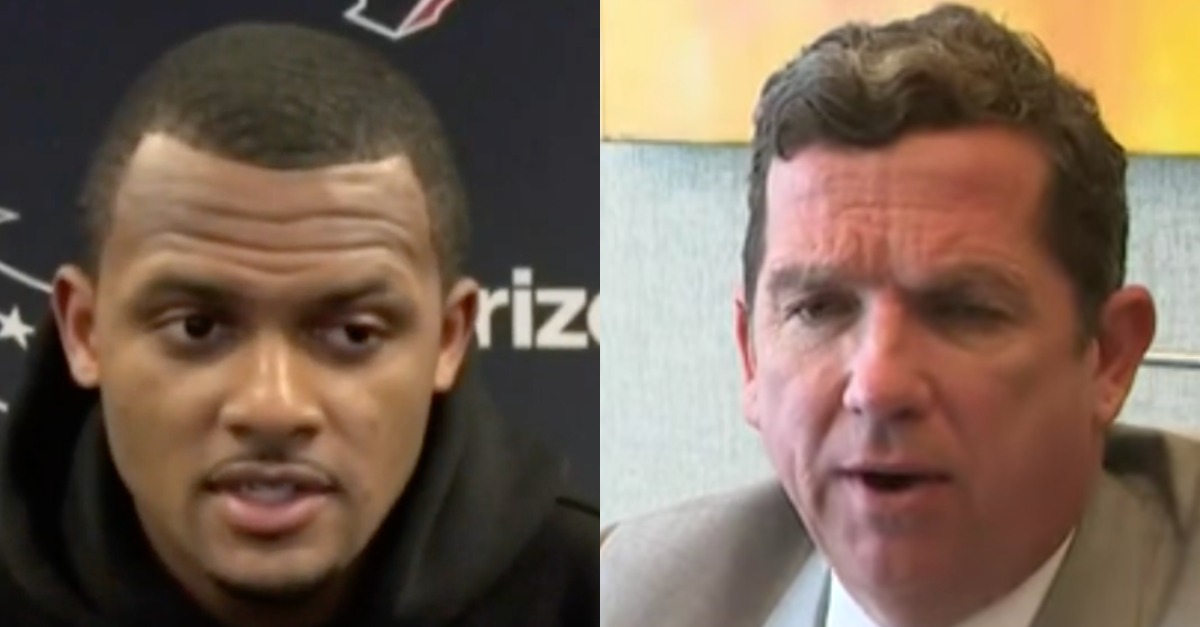 Deshaun Watson, the star quarterback for the NFL’s Houston Texans who recently demand a trade, has been accused of sexual misconduct involving at least 12 and as many as 22 different women as of Friday afternoon.

The allegations were first leveled against Watson on March 16 in a lawsuit by a Jane Doe plaintiff who claims the defendant exposed himself to a masseuse and at one point forcibly touched her hand with his penis. That woman, and at least 11 others, are currently represented by Houston-area defense attorney Tony Buzbee.

Watson responded to the claims later that same day—before any of the lawsuits were publicly available—after learning about them via the attorney’s Instagram.

“As a result of a social media post by a publicity-seeking plaintiff’s lawyer, I recently became aware of a lawsuit that has apparently been filed against me,” Watson said. “I have not yet seen the complaint, but I know this: I have never treated any woman with anything other than the utmost respect. The plaintiff’s lawyer claims that this isn’t about money, but before filing suit he made a baseless six-figure settlement demand, which I quickly rejected.”

An additional lawsuit filed the next day accused Watson of showing up for another massage completely naked and ignoring requests to cover himself. A third lawsuit contained an allegation of sexual assault in which Watson is said to have forced the third Jane Doe plaintiff to perform oral sex on him in December of last year.

According to the third complaint, Watson “got more aggressive, forcefully telling her to move her hand down to his pubic area,” and “instructed her to slide her hand across his genitals” before the alleged attack during which the woman claims to have “blacked out” because she was “confused” and “terrified.”

“Watson kept coercing and intimidating plaintiff and it was at this point that Watson coerced plaintiff to move her mouth towards his penis, forcing plaintiff to perform oral sex on him. Plaintiff did not consent to any of this conduct,” the lawsuit alleged.

Since then, Buzbee has filed several additional lawsuits on behalf of other massage therapists and masseuses who claim that Watson engaged in various degrees of sexual misconduct. During a Friday afternoon press conference, the attorney said that he was now representing 12 women in total with such claims. He added that an additional 10 women have also reached out to him about filing potential civil cases against the quarterback.

Buzbee says he has been contacted by 10 more women. To this point, these are civil cases. Buzbee says no police reports filed to his knowledge “and that’s going to be our next step.”

During the press conference, Buzbee also said he had been contacted by the Houston Police Department.

Houston Police, however, disputed that claim later on Friday.

“At this time, HPD is unaware of any contact between HPD and Houston attorney Tony Buzbee regarding the allegations contained in his recently filed lawsuits and no incident reports regarding these allegations have been filed in our jurisdiction,” according to the department’s official Twitter account circa Friday evening.

Watson’s agent also issued a statement by tweet on Friday:

Buzbee is heavily affiliated with the GOP and previously made a name for himself defending former Texas governor Rick Perry over abuse of power charges in 2014. Buzbee was also a supporter of the governor’s electoral efforts and was appointed by Perry to serve on the Texas A&M University System board of regents in 2013.

Buzbee distinguished himself as a GOP stalwart by hosting a fundraiser for then-candidate Donald Trump in 2016 after Perry endorsed the former reality gameshow host—ultimately hauling in millions of dollars of campaign cash for the eventual 45th president.

The attorney has also earned a reputation as a gadfly.

From the Houston Chronicle:

Buzbee is no stranger to the art world and has also been a victim of it. In 2018 he sued a Dallas woman he was on a first date with after she allegedly destroyed $300,000 worth of artworks and sculptures at his home. One year later $21 million worth of artwork and jewelry were stolen from his River Oaks mansion. He attempted to shoot the burglar but his gun misfired. Two men were later charged in connection with the burglary.

In 2017, he drew crowds to his neighborhood after he parked a World War II-era Sherman tank in front of his River Oaks home. Most recently, he made headlines for staying at the Four Seasons Hotel Houston after a publicity stunt in which he documented himself sleeping on downtown streets following the freeze. Buzbee said the stunt was meant to  “prove a point and raise awareness,” about the local government’s response to the power outages.

The attorney is also rumored to be something of a well-connected scofflaw who has been accused of buying his way out of trouble.

Buzbee was arrested on DWI charges in 2016 but his case was later dismissed by outgoing Harris County district attorney Devon Anderson (a Republican whose campaign Buzbee contributed to in 2014) in an unusual turn of events that prompted media speculation about the decision.

Buzbee later ran for mayor of Houston in 2018, a year in which the nation’s fourth-largest city by population, which had been trending blue for awhile, solidified its status as a Democratic Party stronghold in the Lone Star State. After losing that acrimonious race in which he spent $10 million of his own money, the attorney announced that he would be launching his own food and restaurant show.

“I thought I was Trump. Now I’m Anthony Bourdain,” Buzbee told the Houston Chronicle. “That’s one comparison I would damn well take.”

No episodes of the series have been released.

In the days following his Instagram splash, some wondered whether Buzbee had a connection to the Texans that could explain the storm of litigation against Watson, particularly in light of the fact that Watson wants out of Houston. The New York Post explains:

Buzbee has previously gone billboard-big, too. According to his Instagram, in 2014 Buzbee put 10 billboards up around Houston with the message, “Keep Johnny football in Texas!” trying to get the Texans to draft Manziel, the former Texas A&M star and Heisman Trophy winner.

“… I put up 10 billboards up around Houston asking my neighbor Mr. McNair [former Texans owner Bob McNair] to draft the greatest college football player ever,” Buzbee wrote in the caption. “Obviously, it didn’t happen.”

But Buzbee, in a Trump-esque remark, has put the kibosh on that speculation, telling the Houston Chronicle, “I don’t know the McNair family” and “wouldn’t recognize Cal or Hal or whatever his name is, if I saw him on the street.”

“This case has nothing to do with the Texans, has nothing to do with free agency. The timing? I don’t know anything about that silliness and frankly don’t care about it,” he added. “The Texans are not a team that I follow. This case is about brave women who are willing to step forward knowing that they will be criticized and ostracized and we should all get behind them, applaud them for their bravery and support them.”