Woman Accuses Dodgers Pitcher Trevor Bauer of Punching, Choking, and Scratching Her During Sexual Assault; He Says It Was Consensual 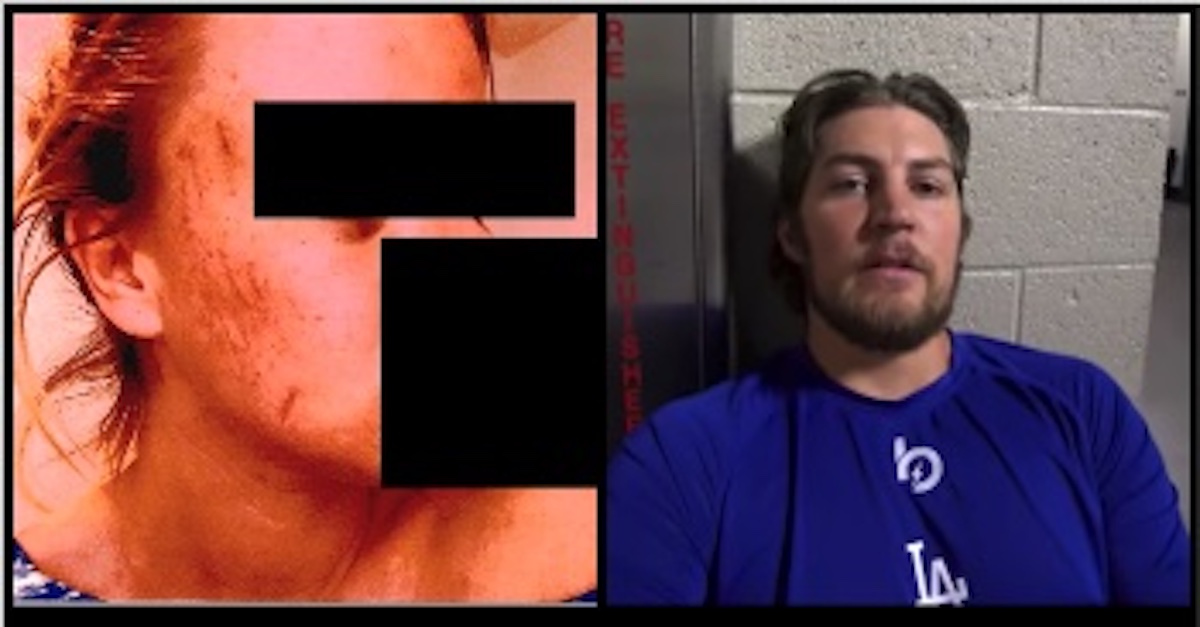 A Los Angeles judge has granted a San Diego woman’s request for a temporary restraining order against Dodgers pitcher Trevor Bauer after the woman alleged that Bauer physically and sexually assaulted her during two separate encounters that initially started as consensual.

According to the Los Angeles Superior Court docket, the request for the Domestic Violence Restraining Order against Bauer was filed on June 29, and a temporary restraining order was granted ex parte (without hearing from the opposing party) that same day. A hearing on a full restraining order has been set for July 23.

In a 78-page declaration, the accuser detailed two alleged assaults on two separate occasions, both of which started out as consensual. She attached multiple exhibits to her declaration, including pictures which she says show bruises and cuts to her face, screenshots of alleged text messages between herself and Bauer, and medical records from her visit to a hospital after her second alleged encounter with Bauer.

Law&Crime is declining to name the woman because she alleges she is a victim of a sexual attack.

Bauer and the woman, a baseball fan, had met on social media in April, when she tagged Bauer in her Instagram story, the documents indicate. Bauer replied to the woman in a direct message, and, as the messages show, they struck up a friendly and flirty rapport. A few days later, the woman went to visit Bauer at his home, where they had what began as a consensual sexual encounter, she said.

The woman continued by saying that she returned to Bauer’s house a few weeks later.

“I agreed to have consensual sex,” she said of her second encounter with Bauer. “However, I did not agree or consent to what he did next. I did not agree to be sexually assaulted.”

This time, the woman said, she was again choked into unconsciousness.  She alleges that she awoke to find Bauer punching and scratching her face, jaw, head, cheekbones, and vagina. She said that Bauer stopped when she started “crying and violently shaking” and that he repeatedly said to her “You’re safe, I’m here. You’re safe.” She said in her declaration that Bauer helped her walk to the shower because she could not walk on her own at that time — and that he also commented on her face, saying “I need to be more careful where I hit you.”

After the second encounter, the woman said, she went to the hospital for injuries to her head, face, and genitals. During this time, according to the declaration, Bauer expressed concern through several texts to her. She said she responded to the texts in accordance with instructions from Pasadena Police, who subsequently recorded a phone call between herself and Bauer.

On Tuesday, the day the restraining order request was filed, the Dodgers released a statement about the allegations, largely deferring to the MLB.

“The Dodgers were made aware of the allegations against Trevor Bauer late this afternoon and immediately contacted Major League Baseball, which will be handling this matter,” the statement said. “The Dodgers take any allegations of this nature very seriously, but will have no further comment at this time.”

Bauer, through his representative Jon Fetterolf, denies that any assault ever occurred.

“Mr. Bauer had a brief and wholly consensual sexual relationship initiated by [the woman] beginning in April 2021,” Fetterolf said in a statement. “We have messages that show [the woman] repeatedly asking for ‘rough’ sexual encounters involving requests to be ‘choked out’ and slapped in the face. In both of their encounters, [the woman] drove from San Diego to Mr. Bauer’s residence in Pasadena, Calif. where she went on to dictate what she wanted from him sexually and he did what was asked.”

Text messages provided to Law&Crime by Fetterolf appear to show the woman talking about their first encounter.

“[Take your socks off] when its time to choke me out,” she texted Bauer, according to screengrabs of the messages.

“Never been more turned on in my life,” she later added, according to the screen shots. “Gimme all the pain.”

The woman’s texts also appear to refer to Bauer slapping her on her face and backside.

Law&Crime could not independently ascertain the veracity of the messages.

The Pasadena Police Department confirmed to Law&Crime that the investigation into Bauer is still underway, and declined to provide additional comment.

An attorney for the accuser did not immediately respond to a request for comment with reference to the messages.

Mr. Bauer had a brief and wholly consensual sexual relationship initiated by [the woman] beginning in April 2021. We have messages that show [the woman] repeatedly asking for “rough” sexual encounters involving requests to be “choked out” and slapped in the face. In both of their encounters, [the woman] drove from San Diego to Mr. Bauer’s residence in Pasadena, Calif. where she went on to dictate what she wanted from him sexually and he did what was asked. Following each of her only two meetings with Mr. Bauer, [the woman] spent the night and left without incident, continuing to message Mr. Bauer with friendly and flirtatious banter. In the days following their second and final encounter, [the woman] shared photos of herself and indicated that she had sought medical care for a concussion. Mr. Bauer responded with concern and confusion, and [the woman] was neither angry nor accusatory.

Mr. Bauer and [the woman] have not corresponded in over a month and have not seen each other in over six weeks. Her basis for filing a protection order is nonexistent, fraudulent, and deliberately omits key facts, information, and her own relevant communications. Any allegations that the pair’s encounters were not 100% consensual are baseless, defamatory, and will be refuted to the fullest extent of the law.

“Dodgers pitcher Trevor Bauer has been placed on seven-day administrative leave while the league continues its investigation into sexual assault claims brought against Bauer earlier this week,” the MLB statement said. “Bauer, according to his representatives, will not appeal the decision at this time.”

Bauer will continue to be paid during his leave, according to the MLB. He had been scheduled to start against the Washington Nationals on Sunday.

“Under the joint domestic policy agreed upon by MLB and the MLB Players Association, the Commissioner’s Office can also ask the Players Association to consent to extending the initial seven-day administrative leave period for an additional seven-day increments. Placement on administrative leave is not a pronouncement of guilt,” the MLB statement also said.