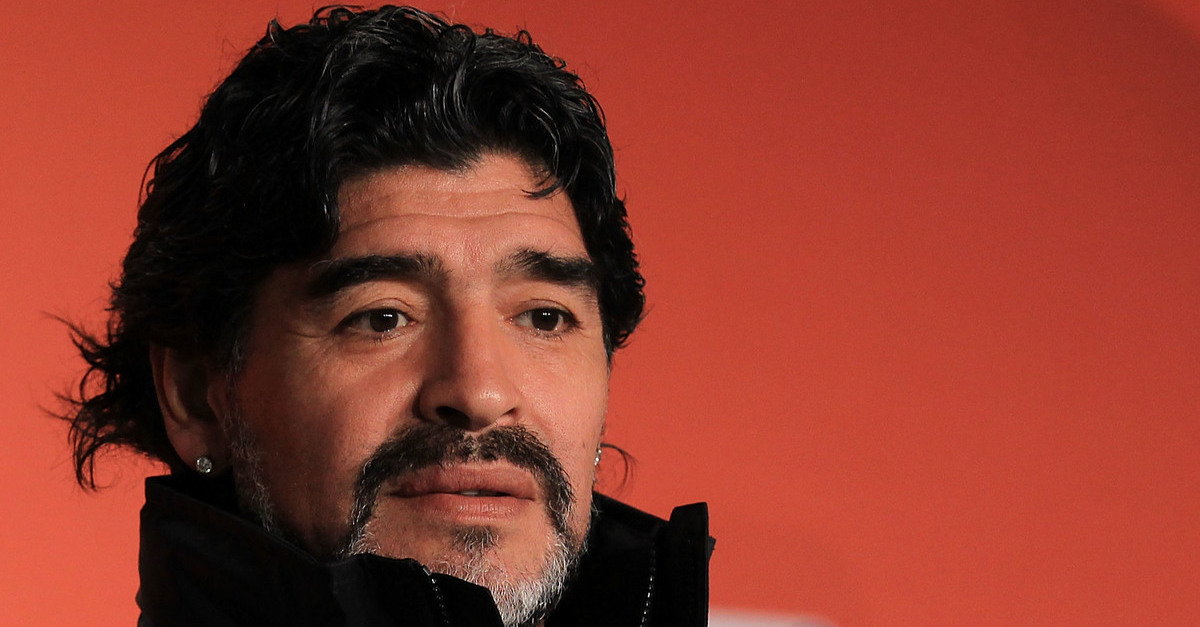 According to ESPN, prosecutors in San Isidro, Argentina filed “simple homicide with eventual intent” charges against neurosurgeon Leopoldo Luque, psychiatrist Agustina Cosachov as well as two nurses, a nurse coordinator, a doctor and a psychologist.

Audio of private conversations between doctors and people from Maradona’s entourage were leaked to the media and have indicated that Maradona was not being properly looked after prior to his death.

The “Hand of God” legend died in his Buenos Aires-area home from heart failure on Nov. 25, 2020 at the age of 60–two weeks after a seemingly successful brain surgery operation performed by Luque.

The neurosurgeon was quickly cast under a cloud of suspicion after the sudden loss of one of the world’s most famous footballers.

The investigation began after two of Maradona’s five daughters filed a complaint against Luque. Prosecutors allege the medical team knew the football great was dying but did nothing to stop him from doing so.

Justice officials in Argentina immediately began their investigation into Maradona’s death by searching Luque’s home after a local judge in San Isidro signed off on the request.

“Yesterday the investigation and substantiation of evidence continued with the taking of statements from people including direct relatives of the deceased,” a statement from the prosecutor’s office noted on November 29, 2020. “By virtue of the evidence that was collected, it was considered necessary to request searches at the home and office of doctor Leopoldo Luque.”

Key to the ongoing investigation are the results of a special medical board appointed to determine any evidence of foul play or neglect leading up to Maradona’s death. That board reported their findings late last month and the results appeared to implicate the professionals involved in treating the long-since-retired football superstar.

The report concluded the medical team acted in an “inappropriate, deficient and reckless manner,” when treating Maradona and ultimately failed to properly care for him after he recovered from brain surgery, instead leaving him “to his own devices.”

Although it’s counterfactual to say that Maradona would not have died if he had been properly looked after in hospital, given his medical history in the days leading up to his death, we believe he would have had a greater chance of surviving.

“He presented unequivocal signs of a prolonged agonizing period, so we conclude that the patient was not properly monitored from 12:30 a.m. on 11/25/2020,” the report continued–stressing that the patient had been effectively “ignored.”

Luque has strenuously denied the allegations and publicly blasted efforts to turn him into a “scapegoat.”

“You want to know what I am responsible for?” he asked out loud during a tear-filled press conference following the raid on his offices. “For having loved him, for having taken care of him, for having extended his life, for having improved it to the end.”

No motive has currently been floated. Each of the eight accused must appear before a tribunal between May 31 and June 14.

“After so many injustices, the case has come full circle,” an anonymous “judicial source” told Agence France-Presse.

If convicted, the defendants face between eight and 25 years in prison.

An inspiration to millions, Maradona led La Albiceleste, the Argentine national football team, to its second World Cup victory in 1986 in one of the most memorable and enduringly talked-about finals games of all time.