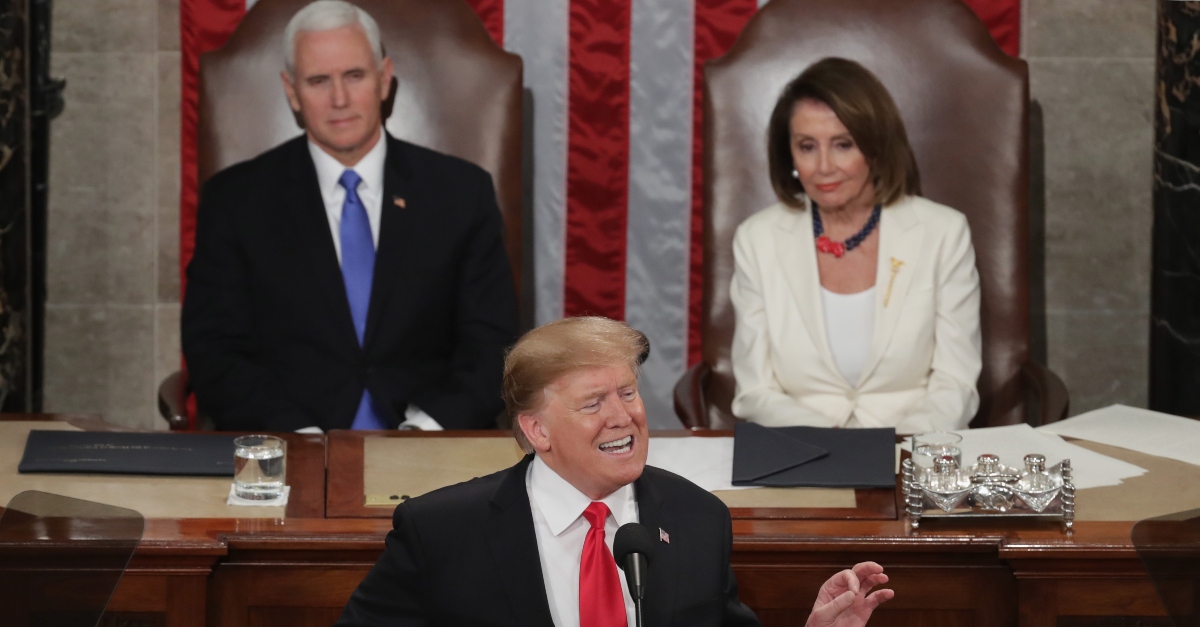 In this era of divided government, opposing views originating from one branch of government and volleyed at another are often construed as threats to the separation of powers. The perceived threats cross party lines. President Barack Obama was heavily criticized for calling out the U.S. Supreme Court at his State of the Union address in 2010 for its decision in Citizens United v. FEC. In late 2018, Chief Justice John Roberts rebuked President Donald Trump after the president referred to a judge who delivered an unfavorable ruling as an “Obama judge.”

For most of this year, President Trump has resisted efforts by the Democratic-controlled House of Representatives to investigate his official conduct and business dealings, challenging the delicate balance that is the separation of powers outlined in the Constitution. After a White House meeting on Oct. 16, House Majority Leader Steny Hoyer, D-Md., reflected House leadership frustration, saying, “Never have I seen a president treat so disrespectfully a co-equal branch of the government of the United States.”

While hyperbolic rhetoric and name-calling are seldom acceptable in a civil society and engender otherwise avoidable disrespect, the legal guideposts that sustain separation of powers are rooted in the U.S. Constitution and case law.

The American structure of government is not the global norm; 104 nations — a majority of democratic governments — have a parliamentary system where the legislative branch is paramount, and the executive has no independent constitutional base of authority. The U.S. Constitution’s first three articles created three co-equal branches of government: the legislative (Congress), executive (headed by the president) and judicial (Supreme Court and lower federal courts). All of the state constitutions similarly provide for these three branches in their state government, and 40 of them explicitly require a separation of powers.

The federal structure reflects the collective thinking of the Founding Fathers, who melded their political philosophy as colonial Americans with their experiences as English colonists. As James Madison wrote in 1788 in The Federalist Papers No. 47, “The accumulation of all powers, legislative, executive and judiciary, in the same hands, whether of one, a few, or many, and whether hereditary, self-appointed or elective, may justly be pronounced the very definition of tyranny.”

Through two centuries, this arrangement has produced its fair share of conflict, notes a 2016 Congressional Research Service report. While the Constitution created a separation of branches, it also provided for overlapping responsibilities, such as giving the president a veto over legislation and giving the Senate approval of executive and judicial nominations made by the president. “Most powers granted under the Constitution are not unilateral for any one branch; instead they overlap,” the CRS report pointed out.

Over time, power has flowed increasingly to the executive branch, a fact many scholars and commentators attribute to strong presidents like Abraham Lincoln and Franklin Delano Roosevelt rather than to any constitutional provision, statute or court ruling. After 9/11, for example, President George W. Bush adopted particularly assertive ideas about his authority as chief executive. This led to warrantless eavesdropping on American citizens’ phone calls and emails, and Bush’s signing statement declaring his authority as commander in chief to override the Detainee Treatment Act of 2005, with its absolute prohibition on “cruel, inhuman, or degrading treatment or punishment” of prisoners.

When these types of practices are challenged, the courts referee. In the first three years of the Trump administration, for instance, federal judges have halted numerous proposed changes under immigration laws, prompting the White House to issue an Oct. 11 statement titled, “Activist Judicial Rulings Block the Administration From Enforcing Our Nation’s Immigration Laws.” Many of these cases are on appeal.

The most enduring U.S. Supreme Court decision dealing with the balance between executive and legislative authority came after President Harry Truman signed Executive Order 10340, which placed all U.S. steel mills under federal control during the Korean War. In 1952, the Supreme Court ruled 6-3 in Youngstown Sheet & Tube Co. v. Sawyer  that Truman had overstepped his authority because he attempted to make law rather than clarify an existing piece of legislation.

Justice Robert Jackson, in a concurring opinion, put forth a three-part test that is still relied upon by courts today in navigating conflicts between executive and legislative authority. Jackson said the president’s powers were at their height when he had the direct or implied authorization from Congress to act; at their middle ground or “a zone of twilight,” as he put it, when acting without either a congressional grant or denial of authority; and “at its lowest ebb” when a president acted against the expressed wishes of Congress.

Two decades later, President Richard Nixon attempted to block a special prosecutor’s attempt to secure presidential recordings as part of the Watergate investigation. His attorneys argued both separation of powers and confidentiality. But in U.S. v. Nixon, a unanimous Supreme Court ruled that “neither the doctrine of separation of powers nor the need for confidentiality of high-level communications, without more, can sustain an absolute, unqualified presidential privilege of immunity from judicial process under all circumstances.”

“Absent a claim of need to protect military, diplomatic or sensitive national security secrets, we find it difficult to accept the argument that even the very important interest in confidentiality of Presidential communications is significantly diminished by production of such material for in camera inspection with all the protection that a district court will be obliged to provide,” the court ruled.

The extent of presidential power in foreign and military matters remains largely undefined. In Zivotofsky v. Kerry  in 2016, the Supreme Court struck down a congressional mandate that allowed a person born in Jerusalem to record the place of birth on a U.S. passport as “Israel.” The court said this section in a State Department authorization act constituted an infringement of the separation of powers, because the president’s power to recognize foreign sovereigns is exclusive and overrides Congress’s authority to regulate passports. The court also noted that in separation-of-powers cases it puts “significant weight upon historical practice.”

The separation-of-powers argument is likely to move to the public forefront in the coming months as battles between the executive and legislative branches regarding oversight and impeachment play out in the courts. In these cases, judges would be expected to consider legal precedent and the continued viability of Justice Jackson’s enduring three-prong test.