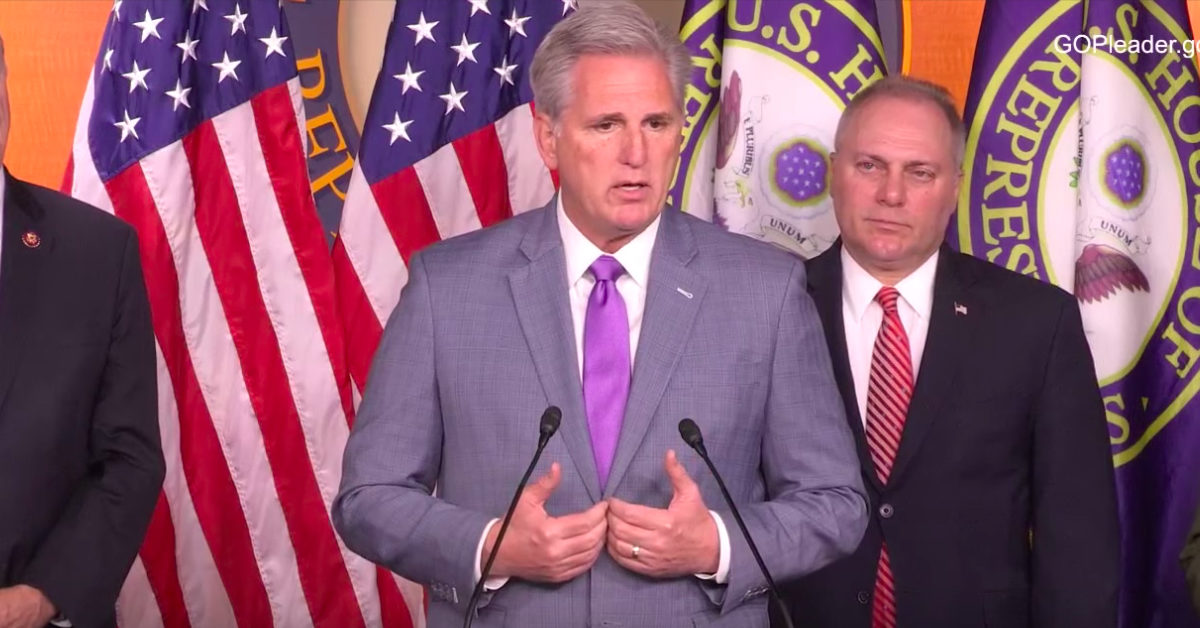 Republican House Minority Leader Kevin McCarthy (R-Calif.) on Tuesday attacked Democrats’ impeachment inquiry against President Donald Trump, calling it  “an entire sham.” Unfortunately, in his diatribe against the investigation into Trump’s alleged abuse of power, McCarthy used several legal terms that he clearly did not understand — or, at the very least, failed to correctly employ. Legal experts were quick to respond.

McCarthy, who has Bachelor of Science and Master of Business Administration degrees but no legal training, got off to a rocky start when he misused the term “due process,” which, in short, refers to the fundamental principle of fairness in legal proceedings. Impeachment is a political process, not a legal one.

It may surprise you to learn that Rep. McCarthy does not have a law degree. https://t.co/xwbPZkZdTE

“You can’t put the genie back in the bottle. A due process starts at the beginning. It doesn’t affirm a miss, sham investigation all the way through,” McCarthy said, before broaching an even more abstruse legal doctrine known as “fruit of the poisonous tree.”

The term, first coined in 1939, is a legal metaphor used to describe illegally obtained evidence that must be excluded at trial.

“If you were in the legal term, it’d be the fruit from the poisonous tree; it’d be a mistrial. None of this information would go forward,” McCarthy said.

Professor Steve Vladeck of the University of Texas School of Law was quick to point out McCarthy’s errors, writing, “I could ask my first-year law students to identify everything that’s incorrect or misleading in [McCarthy’s] statement here, but it would be too easy,” he wrote before providing a multi-faceted explainer.

Vladeck began by clarifying why the “fruit of the poisonous tree” doctrine in not applicable to the current proceedings.

“Fruit of the poisonous tree is about evidence obtained unlawfully being inadmissible—and (a) only results in suppression of evidence; and (b) has lots of exceptions,” Vladeck explained. “No one is arguing the House has violated [President Trump’s] Fourth Amendment rights,” he wrote, before delving into McCarthy’s “mistrial” comment.

“A mistrial is what happens when, in the middle of a trial, some uncorrectable error has occurred. There’s nothing remotely resembling a trial here—and there won’t be until and unless this goes to the Senate,” he wrote. “Even then, most mistrials don’t actually invalidate the entire proceeding; they just require the case to start over. So even [McCarthy’s] preposterous analogy doesn’t actually lead him to where he wants to go,” Vladeck said, concluding that McCarthy’s argument was part of a larger attempt to distract from the substantive issues surrounding impeachment.

Sasha Samberg-Champion, a former senior appellate attorney for the Department of Justice, said McCarthy’s press conference was nonsensical in a throw it at the wall and see if it sticks kind of way.

“This is like legal doctrine mad libs. Plug in some random legal term and pretend it applies,” he tweeted.

Other attorneys were even less kind.

And we have today's winner of the Billy Madison Award. May god have mercy on your soul, Rep. McCarthy. https://t.co/f7gXMGRLp0

McCarthy: Judge, I move that you exclude this witness on the basis that he spoke to police before he came here to testify today. That's fruit of the poisonous tree.

Leader McCarthy, are you just saying random terms you heard on Matlock? https://t.co/HHoEHBRdZU