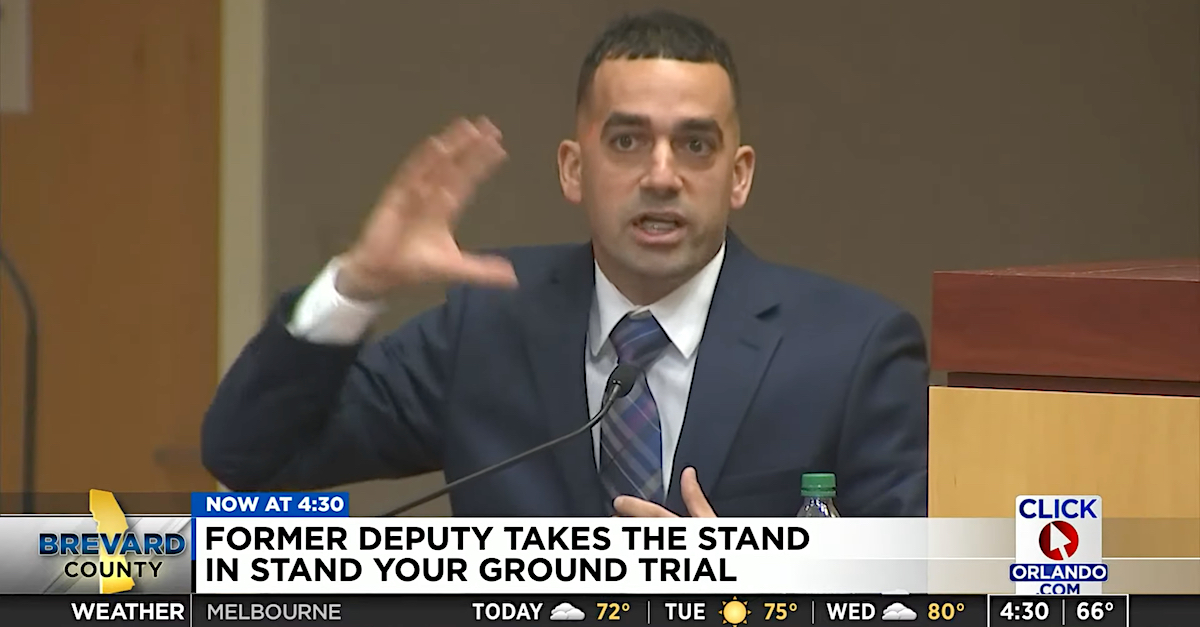 In a pretrial “stand your ground” hearing, Yousef Hafza describes the altercation which resulted in the deadly shooting. (Image via screen capture from WKMG-TV/YouTube.)

A jury acquitted an off-duty former Florida sheriff’s deputy for shooting and killing a passenger in a vehicle after he and the vehicle’s driver nearly collided with one another. The jury was forced to consider two very different versions of what occurred in a case where prosecutors accused the now-former deputy of road rage.

Yousef Hafza, 36, of Palm Bay, Fla., was a Bervard County sheriff’s deputy when he shot and killed Clarence Howard, 22, on Father’s Day in 2016. Howard was riding in a car driven by Jose Montanez. Hafza successfully claimed self-defense, citing Florida’s “stand your ground” law. He had no legal duty to retreat. He was charged with — and acquitted of — second-degree murder and attempted second-degree murder.  The jury chose not to convict on lesser-included charges.

According to an affidavit filed at the commencement of the case, Howard started to turn off of a side street and onto a busier road when Hafza sped down the street and nearly hit him. Howard said he had to brake to avoid a collision. According to his account, which was subsequently adopted by prosecutors, Howard followed Hafza to see why the collision almost occurred; however, Howard maintained that Hafza “remained the lead vehicle” and that there was “never a vehicle pursuit.” Howard also said “he never tried to pass Hafza or speed ahead of him.”

Hafza stopped on the St. Johns Heritage Parkway, stuck his head out of his window, and said, “what happened, motherfucker?”

“What happened?” Montanez asked back.

Montanez and Howard got out of their car. 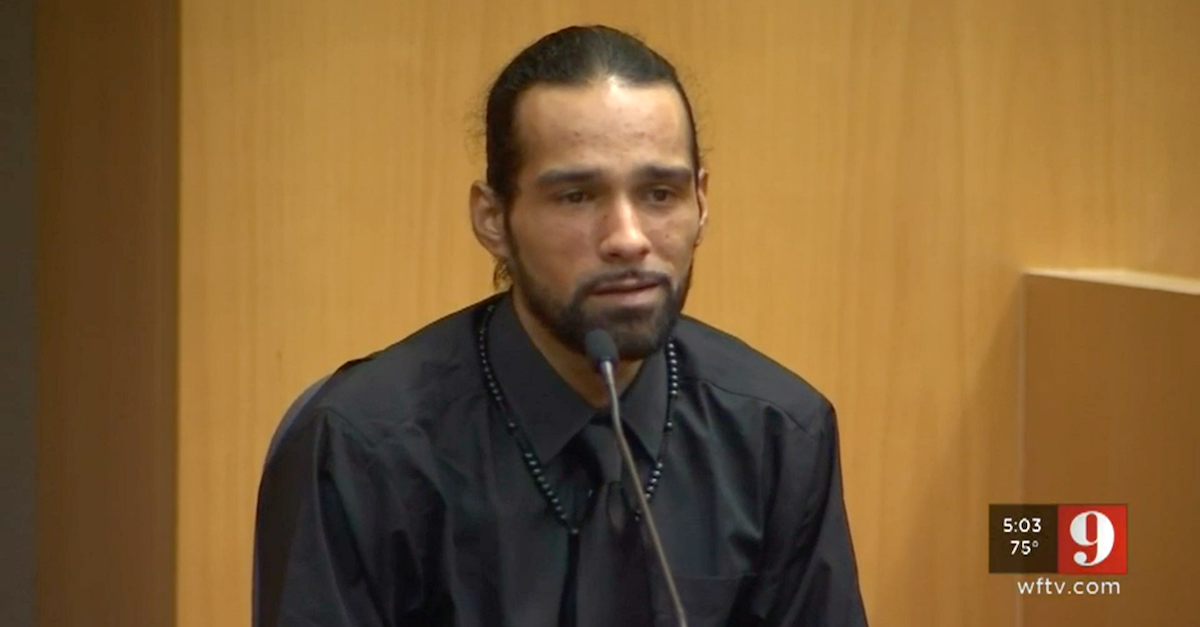 “What happened? We just telling you back there when you almost hit us,” Montanez said.

“Oh yeah, motherfucker?” Hafza said in response. He then closed his window.

Montanez said he assumed Hafza was going to leave, so he started to walk back to his car.

But Hafza got out of his car. Hafza “armed himself with a pistol and began firing shots at Montanez and Howard,” the affidavit reads. “Montanez immediately ran to his vehicle for cover. Montanez believed Howard was running behind him. When Montanez was behind his vehicle for cover, he then saw Howard lying on the road. Hafza fired several more rounds in Howard’s direction.”

Montanez and Howard were unarmed.

Howard was struck once and died at a hospital. Police recovered six shell casings. The body was 50 feet away from the nearest shell casing. The gunshot “immediately paralyzed” Howard “from the waist down,” the affidavit states, citing the Brevard County Medical Examiner. 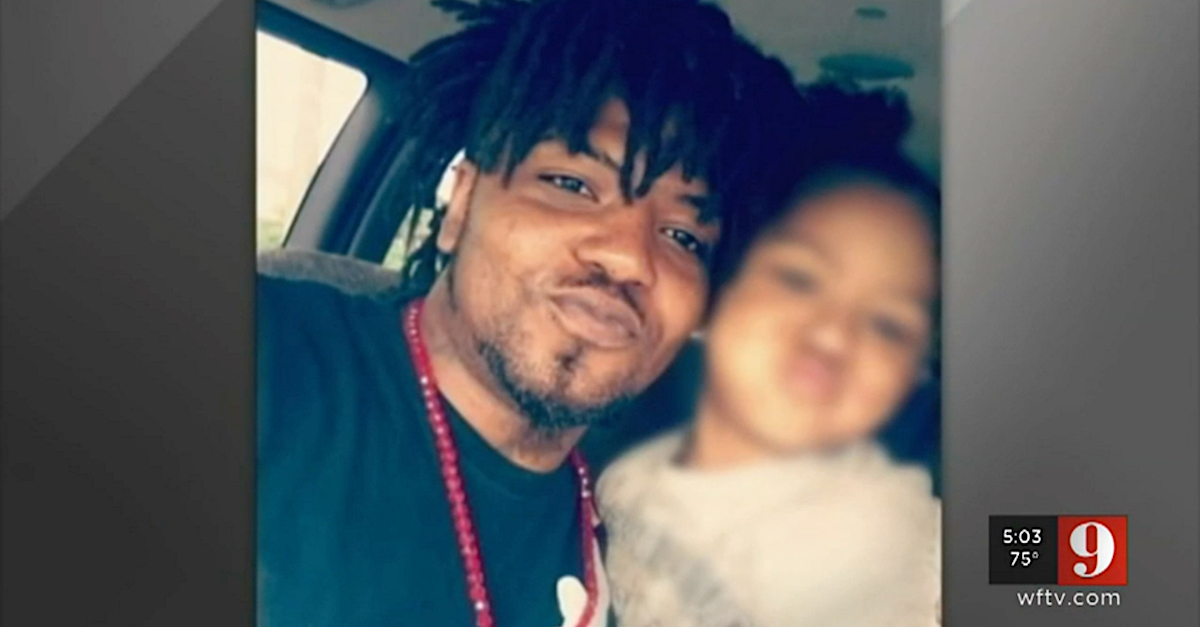 But Hafza gave a very different view of the incident.

According to the affidavit, Hafza said Howard Montanez pulled alongside him while Howard “extended his body out of the window of the vehicle and began yelling.” Hafza said Montanez nearly collided with him. He then claims Montnez began to yell racial slurs at him.

The affidavit picks up what Hafza said happened next:

As Hafza was speaking to Montanez and Howard, Howard started to sprint towwards him while Montanez began to approach him on a wide right angle. Hafza continued to say, “I’m sorry.” Howard was sprinting toward Hafza and began to skip or hop in a bladed stance while approximately 10 to 15 yards from Hafza. Howard’s hands were at his waistband. Hafza continued to yell for Howard to stop, and Howard continued to hop or skip toward him. At that time, Hafza stated that he feared that Howard was going to hurt him or kill him. Hafza then began to shoot at Howard and saw Howard hit the ground. Hafza observed Montanez looking over the hood of the car and thought he was going to start shooting at him. Hafza left the scene in fear of becoming involved in a “gun battle” with Montanez.

Defense paperwork on file in the case said Hafza was “forced” to fire on Howard and that both Howard and Montanez were members of a gang — and that Hafza recognizde their gang attire when they got out of their car. The defense said Hafza was on the phone with his ex-wife through part of the incident because he was on his way to her house to mow her lawn.

Hafza didn’t call 911 until after he left the scene. He testified that Howard was advancing upon him when he fired.

“You would have to address the threat, eliminate the threat that’s presented to you,” Hafza testified. “Unfortunately, in this situation it meant I had to shoot Clarence Howard.”

“The timing of everything was happening beyond words, it was happening too fast,” Hafza testified. “I didn’t have time to flash a badge and yell police and everything else. The only thing I could do is react to their actions.”

“I just knew that I was in danger in that very moment and I had to protect myself,” he continued. “I believe he definitely could have gotten an upper hand on me . . . could have punched me, knocked me out, beat me senseless. My gun could have fallen out of my shorts.”

Prosecutors described the case as one of road rage — by Hafza. The defendant’s ex-wife testified that he was prone to outbursts on the road and had committed road rage more times than she “could count.”  At one point, the ex-wife said Hafza caused a crash by cutting someone off on the highway.

Hafza’s defense attorney said his client “was being hunted” by Howard and Montanez. The defense pointed out that the trajectory of Howard’s gunshot wound suggested that Howard was leaning forward while running toward Hafza.

The jury sided with Hafza after about three and a half hours of deliberations.

After the verdict, Hafza and his attorney both provided reaction to local newspaper Florida Today.

“We’re so happy today that the system played itself all the way to the end and the jury saw the truth,” Hafza said after the verdict. “It’s definitely a huge weight off our shoulders for sure.”

“We’re still sad this is a tragedy for the Howard family and for Jose Montanez’s family but we think justice was served today,” said defense attorney Eric Barker.

After court, Howard’s sister complained to WFTV-TV that little effort was spent choosing the jury and that the verdict prolonged the family’s anguish.

Hafza resigned from the sheriff’s office in August 2016.

Read several of the relevant court documents below.