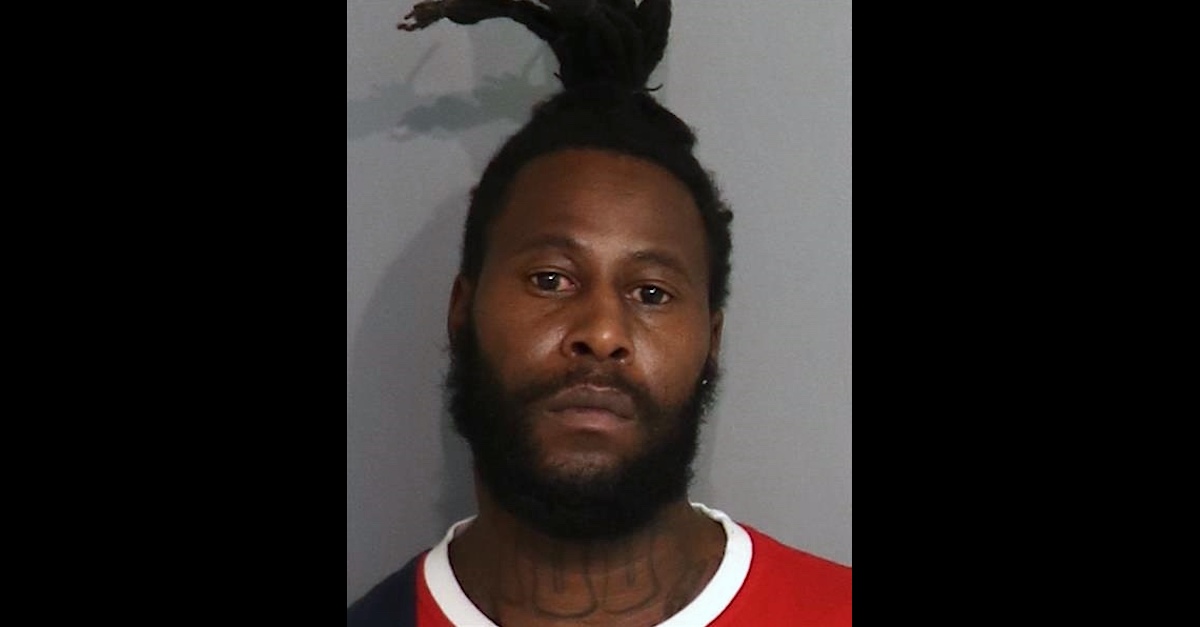 Authorities in Florida have to re-capture a suspected murderer after prosecutors say his defense attorney miscalculated his possible release date and fooled a judge into ordering the local jail to let him go.

According to WFTV-TV, the Osceola County Jail released Jamond Lamb, 38, on Wednesday “before charges were officially filed” — all because of a “mathematical error.”  Lamb is wanted on a charge of first-degree premeditated murder connected to the killing Nathaniah Fredericks at Coach’s Corner, a Kissimmee bar, on Feb. 28.  He’s alleged to have shot Fredericks in the back of the head while the victim was sitting in a car, according to various news reports surrounding his arrest.

The U.S. Marshals Service caught Lamb in Rochester, N.Y. on or around March 26, according to multiple reports. An “anonymous tip” led the agents to “a home on Wellington Avenue” where Lamb was located, said a report by Rochester ABC affiliate WHAM-TV.  The Rochester Democrat and Chronicle said the Monroe County, N.Y. Sheriff’s Office K-9 Unit and a team from the New York State Gun Involved Violence Elimination (GIVE) Initiative assisted with the arrest.

Osceola County, Fla. jail records indicate that Lamb was booked in that jurisdiction on April 14. According to court documents, that date set the clock ticking.

Lamb’s defense attorney, Junior A. Barrett, filed court papers on May 11 asking a judge to release the defendant from custody. Barrett cited a Florida Rule of Criminal Procedure which requires a judge to issue an order 30 days after a defendant’s arrest for that defendant to be released from custody on the 33rd day after his arrest “unless formal charges are filed by that date.”  The rule, in essence, is designed to prevent prosecutors from locking people up indefinitely without probable cause or a viable case.

In those May 11 court papers, Barrett, writing for Lamb, stated that “the 30th day has passed and the state has failed to file charges.” Barrett also claimed “the 33rd day has also passed.”

Based on those defense filings, Judge Mikaela Nix-Walker signed a release order on May 12.

The problem, prosecutors quickly noted, was that neither 30 nor 33 days had passed from the noted date of Lamb’s incarceration in Florida. But by then, Lamb was out of jail.

“Defendant clearly did the math incorrectly, as 33 days from April 14 is May 17, 2021,” they wrote. The latter date is five days after Judge Nix-Walker signed the release order.

“Without setting the motion for hearing or requesting a response from the State, this motion was apparently granted and the defendant has apparently been released from the Osceola County Jail,” prosecutor Kelly Barbara Hicks said in a motion filed on May 13.  “The State learned of Defendant’s release from the lead detective on this case.”

“Because Defendant’s motion was filed 3 days early, granted 2 days early, and Defendant was released at least 5 days prior to the 33rd day, the State requests this Court reconsider its order,” Hicks said.

Under the Rule of Criminal Procedure cited by the defense as the grounds for its original motion, defendants are only supposed to be released with “notice to the state.”  Hicks said that “[t]he State has not been served with a copy of this Court’s order granting the defendant’s motion.”  Rather, she said prosecutors relied on a copy of the defense motion which is publicly available on the local Clerk of Court’s website to base their arguments.

Judge Nix-Walker backtracked by issuing an arrest order on May 14 seeking to take Lamb back in custody.

Authorities told the WFTV they don’t know where Lamb might be.

Barrett, the defense attorney, did not immediately respond to a Law&Crime email seeking comment or clarification about the state’s characterization of his motion.  If he does provide a response, Law&Crime will update this report.

Read the relevant court papers below.  The matter referenced is case 2021 CF 585 in Osceola County, Fla.