‘If They Don’t Kill Me, I’ll Have to Kill Them’: Police Shoot Armed 13-Year-Old Boy After He Claimed to Have Killed Three People and Fired Gun 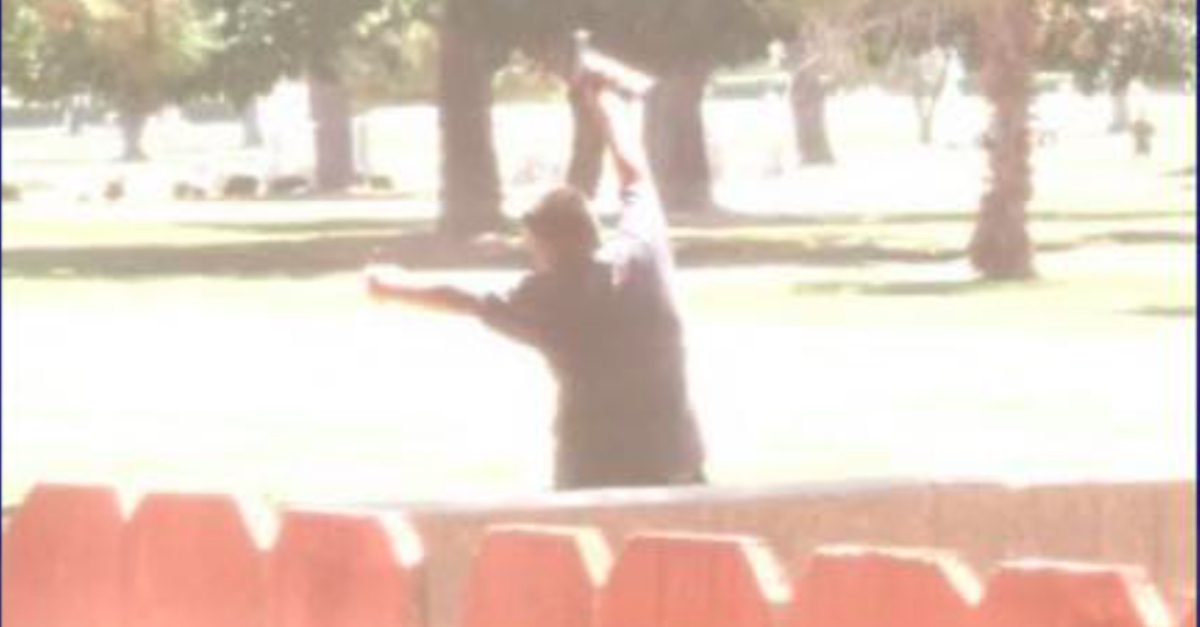 Police in California say they shot and wounded an armed 13-year-old boy in a local cemetery on Thursday after he falsely told authorities that he had murdered three people and fired a gun in the air after officers arrived on the scene.

The San Bernardino Police Department said that the minor suspect called the police dispatch center at 1:52 p.m. on Thursday and said that he had just killed three people. The child allegedly notified the dispatch operator that he was in the Pioneer Cemetery at 211 E. 9th Street and allegedly threatened to kill any officers being sent to his location.

“If they don’t kill me, I’ll have to kill them,” the boy said, according to a press release from the department.

The dispatcher also said that they heard the boy fire several shots from the firearm while he was on the phone.

When officers arrived at the cemetery a short while later, they found the boy, who appeared to be carrying at least one handgun that was both loaded and equipped with an extended clip. There were also several uninvolved bystanders in the cemetery whose “safety was jeopardized by the suspect’s actions,” police said.

The department said that the responding officers took up positions around the perimeter of the cemetery and attempted to make verbal contact with the boy in order to negotiate his peaceful surrender.

“As the officers were doing this, the suspect fired an additional shot from the gun. Despite the suspect’s provocation, the officers maintained containment for an extended period of time and continued their efforts to end the incident peacefully by establishing dialogue,” the department stated. “Although officers gave numerous commands to drop the gun the suspect failed to comply. Ultimately, the suspect escalated the confrontation when he pointed a gun at officers, resulting in an officer involved shooting.”

Officers fired on the young suspect, striking him once, the department said. No bystanders were injured during the encounter and the boy was transported to a local hospital for treatment. His condition was not publicly disclosed, though several news outlets said he is expected to survive.

One of the bystanders, Nataly Lopez, recorded the incident on her cell phone and spoke to reporters with KCBS-TV.

Lopez told the station that she spoke to officers after the boy was taken to the hospital. They told her that he was standing next to his mother’s grave when he confronted police.

Lopez also confirmed that she saw the boy point the gun at the responding officers and was worried that he may take aim at her or her children.

Police said the boy was in possession of a backpack which contained two loaded handguns, four extra magazines, a holster, and “a large cache of ammunition.” Detectives suggested the stockpile indicated that the boy was planning to orchestrate a “prolonged confrontation” with the responding officers.

A subsequent investigation revealed that the boy had been lying when he told police that he had killed three people.

The department included several photographs from the encounter showing the suspect holding a gun in his right hand. One of the photos shows him raising the gun up in the air and firing a shot, according to the caption, while another appears to show the smoke discharge after the shot was fired.