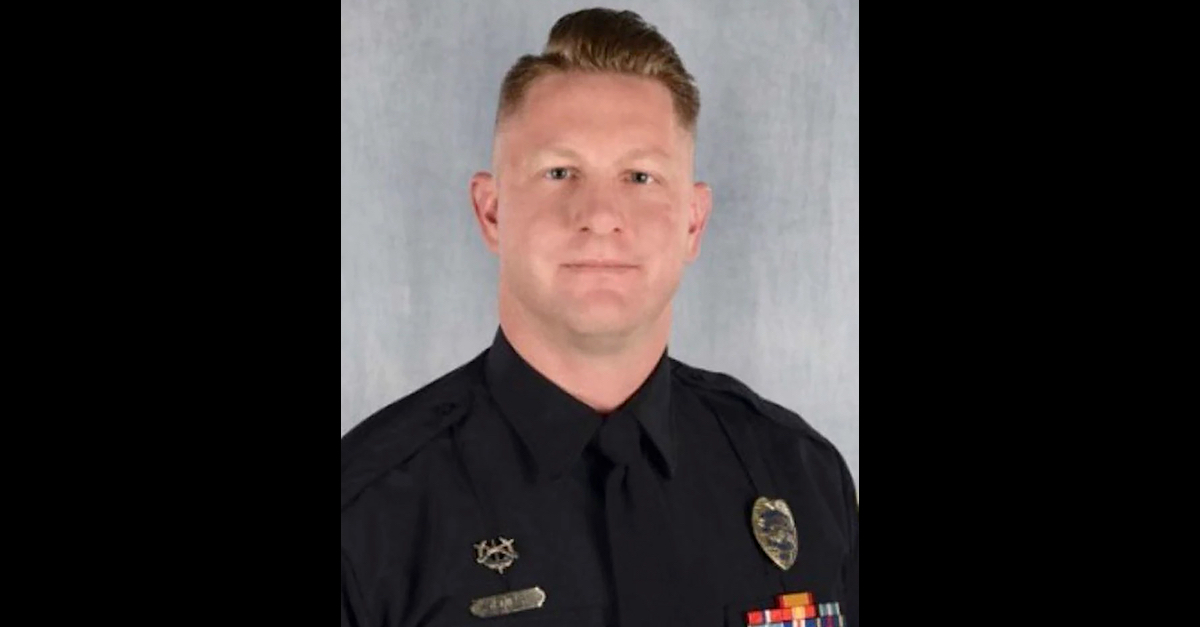 A former officer with the Orlando Police Department was arrested after he allegedly assaulted a suspect during a 2014 traffic stop by roughly fondling the suspect’s genitals and forcing his finger into the man’s anus.

Jonathan Mills, who was named Orlando PD’s “officer of the year” in 2018 despite a scandal-plagued tenure with the department, was charged by Orange-Osceola State Attorney Monique Worrell with one count each of battery and sexual battery by a law enforcement officer.  That’s according to online court records.

The Orlando Sentinel reported that Mills and Sgt. Paul Griffith on Aug. 12 2014, were searching for a man named “Jeremiah” in gray Toyota Corolla when they pulled over two men driving a silver Nissan Sentra. Although they quickly concluded that the men weren’t the suspect they were looking for, Mills reportedly decided to search Clinton Fair, the man in the passenger seat.

Fair reportedly said Mills “pulled on his genitals” before turning moving focus to his buttocks.

“He tries to — he tries to open it,” Fair said in reference to his anus during a deposition, “but at that point I’m — I’m tense. I’m frozen.” He puts his whole body against mine, on top of the car, and says in my ear, really close, what are you hiding in your [anus]?”

Fair said Mills then handcuffed him and brought him behind the patrol car where Mills allegedly used a finger to penetrate Fair’s anus.

“I kept telling him no, and he kept doing it,” Fair said. “I never felt so violated in my life.”

Both Fair and the driver of the Nissan Sentra were released, and no criminal charges were brought against either man.

In a statement to the Sentinel following Mills’ arrest, OPD Chief Orlando Rolón said that Mills was terminated from the force in February and had not performed any law enforcement functions in his final 18 months.

“Many changes and implementations have been made during the last three years to address many facets of the Orlando Police Department,” Rolón said. “I am very proud to work with the members of this agency who embrace change and our commitment to better serve.”

Rolon also noted that the department’s internal affairs unit investigated Mills’ 2014 encounter with Fair but said the allegations “could not be proved or disproved based on the evidence and individuals interviewed at the time.”

According to investigators with the State Attorney’s Office, Mills was not disciplined by the department and there was no evidence to indicate that his actions “were investigated for any criminal wrongdoing” even after Fair filed a formal complaint with the department.

Mills has maintained that all he did during the encounter with Fair was pat him down and check the contents of his pockets.

The Sentinel further reported that Mills in 2016 was removed from an “elite tactical squad” after making commenting about a Black woman’s hair during a traffic stop that was described by the Citizens Police Review Board as “racist.”

He was reprimanded in 2019 after being caught on bodycam footage “taunting teens during an arrest and acting in an unprofessional manner” per a 2021 review of the department.

Mills was arrested Thursday morning but was quickly released after posting $16,500 bond.  According to court records, he pleaded not guilty.  An arraignment is scheduled for Oct. 5.