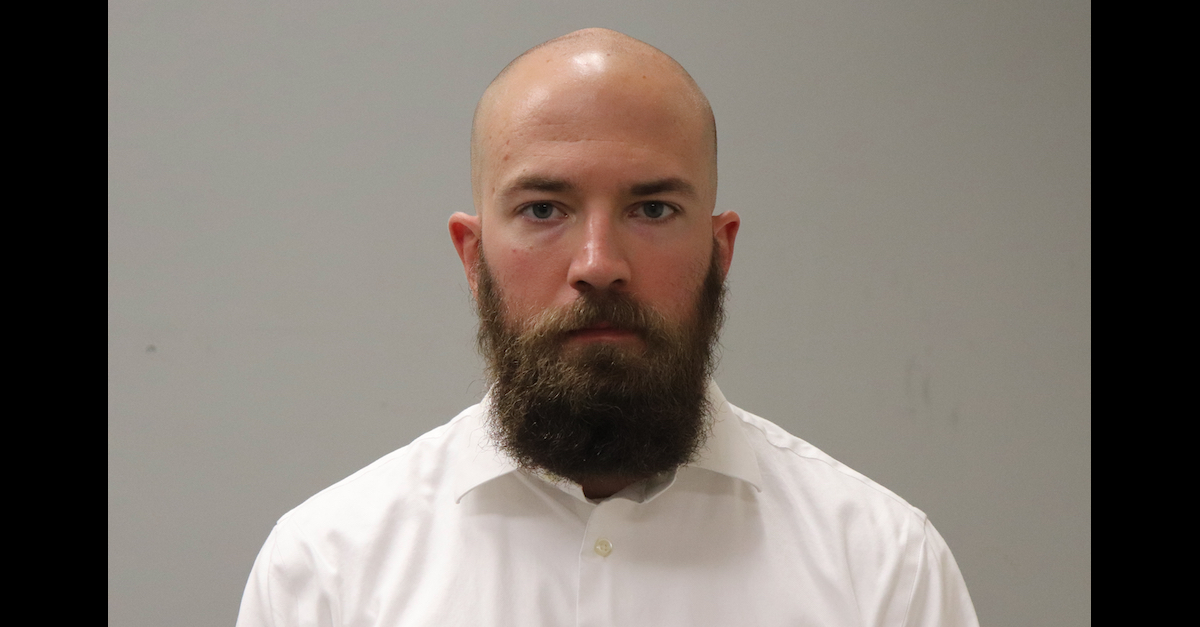 William Darby appears in a post-sentencing mugshot taken by the Madison County, Ala. Sheriff’s Department.

A judged sentenced a former Huntsville, Ala. police officer on Friday to 25 years in prison for murdering a man during a call for help.

A jury convicted officer William Ben Darby in early May.  The conviction drew immediate protests from the city’s mayor and police chief.  Both indicated in strongly-worded statements that they believed the jury made the wrong decision.

Darby, now 28, and other officers were called to a home in April 2018 where a suicidal man, Jeffery Parker, 49, was holding a gun to his own head.  Another officer, Genisha Pegues, testified that she was trying to talk Parker into putting down his weapon.  Darby arrived and testified that he “made the conscious” decision to take over the scene.  Darby ordered Pegues to “point [her] fucking gun at” Parker.  Darby also said he believed Pegues didn’t have adequate cover.  Darby pulled the trigger and killed Parker by shooting him in the face.  He claimed Parker moved his gun and that he believed he needed to open fire to protect the other officers on the scene.

Less than clear copies of the body camera video available online suggest that Darby pulled the trigger approximately a minute after exiting his squad car and about ten seconds after he entered the threshold of the house in which Parker was sitting.

The judge overseeing the trial allowed Darby to post bond and go home after his conviction.  Darby had to return to court for sentencing.  Convicted murderers are allowed to post bond between conviction and sentencing and to walk free under certain circumstances under Alabama law.

Darby’s 25-year sentence is on the lower end of the possible sentencing range for a convicted murderer in Alabama.  A judge could have sentenced Darby to anywhere between 20 years and life in prison, Huntsville ABC affiliate WHNT-TV reported.  Prosecutors asked for 25 years, and that’s what the judge delivered on Friday.

Darby’s attorneys told the judge at sentencing that their client did what he thought was right in order to protect innocent people from harm.  Prosecutors countered that Darby was unwilling to admit that he did something wrong and improperly sized up the situation before he fired the lethal kill shot with ended Parker’s life.

Darby said at sentencing that he was haunted by what happened.

“I believe it is evident I didn’t want to kill him,” Darby also said, according to a report by regional newspaper consortium AL.com.

“I love deeply and I care about others and I’m asking you to take that into consideration today,” he also reportedly said, according to NBC affiliate WAFF.

WHNT also reported that Darby pointed to 72 character witness letters and statements from others — including his wife and his pastor — should result in leniency.

“He is someone I absolutely trust,” said Steve Taylor, Darby’s pastor.

The television station summarized Taylor’s words to the court as indicating that the pastor considers Darby a “friend and fellow believer.”

Another Darby friend, Clint Murphree, told the court that Darby was “a Christian man who serves his community.”

Murphree also reportedly told the court that Parker’s murder “strengthened and solidified Darby’s faith.” That’s according to a WHNT synopsis of his statement.

“I need him in my life,” Keelin Darby said, again according to WHNT. “I couldn’t have asked for a better husband and I thank the Lord for him and what he stands for.”

Darby’s defense has for several months promised an appeal. Now that Darby has been sentenced, the defense can begin to file that paperwork.

“This is obviously an extremely important case — not only for Ben and his family, not only for the Parker family — but for law enforcement in the state of Alabama,” said defense attorney Robert Tuten at a post-court press conference reported by AL.com. “This case is going to have a huge impact on how police officers enforce the law and how they do their jobs.”

Parker’s family members and their attorney said after the sentencing hearing that the sentence was just.

One of Parker’s friends, Bill Parks, said the victim “was in a mental state” and “had issues.” But he also told AL.com that it was “very confusing to think” that the shooting was “by the book, apparently, for Huntsville police.”

Parks said Darby apparently thought it was “OK to barge in ferociously, militantly, yelling and screaming at someone who had asked for help.”

Parks further said it was incorrect for Darby to assume that Parker presented an “imminent threat to the police.”

“Genisha Pegues showed that was not the case,” Parks concluded.

WHNT’s coverage of the sentencing is below: