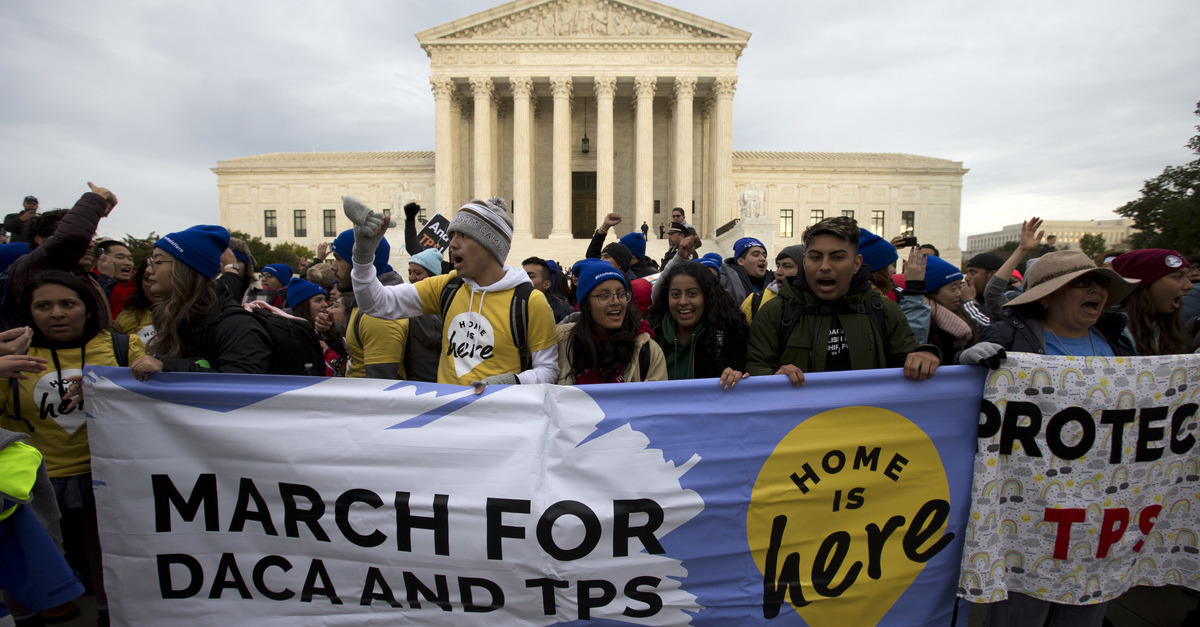 Tuesday is the day that the much-anticipated DACA case is slated for oral arguments in front of the highest court in the land, and nearly 1,000,000 “Dreamers” will get one step closer to knowing their fate. One of those Dreamers will be sitting right at the counsel table during Tuesday’s proceedings.

First, a quick recap on the fight that’s about to go down at the Supreme Court.

In 2012, then-President Barack Obama directed DHS to allow “certain young people” (who might have been deported) to apply for a two-year deportation deferment after they’d passed a background check. The young people we’re talking about here are the children of undocumented immigrants brought to the United States before 2007, when they were less than 16 years old. The program was meant to be a short-term plan to prioritize the deportation budget by putting law-abiding kids at the end of the deportation agenda, and allowing them to pay for health insurance and social security while they’re here.

President Donald Trump had to deal with the PR mess that is DACA: on the one hand, he claims he’s trying to protect us from “bad hombres”; on the other hand, most Americans are soft-hearted toward Dreamers. Trump chose to punt the problem to Congress by rescinding DACA and giving Congress six months to pass legislation to protect Dreamers.

The lawsuit examines whether the Trump administration was legally permitted to abruptly end DACA as it attempted. Trump says the program was illegal from the start, and that he’s under no obligation to keep it going. The case, which has potential to directly affect close to 1,000,000 people, has been fast-tracked the case to the Supreme Court.

Legally, the case presents a conundrum that is almost riddle-like. If a presidential administration believes a policy to be illegal, how can it be illegal to stop that policy?   The Ninth Circuit ruled that the federal government had to do precisely that – and keep DACA in place for the time being. Now, SCOTUS will begin the process of weighing in on the matter.

Theodore Olson, who has argued dozens of cases before the Supreme Court and served as solicitor general under President George W. Bush, will take the lead defending the program, which the Trump administration seeks to terminate.

Olson is anything but a lightweight. He is a Republican icon, with a distinctly conservative take on presidential authority. He’s on the Board of Visitors of the Federalist Society and was once Ronald Reagan’s private counsel. Olson has argued 63 cases before the Supreme Court, many of them as solicitor general in the George W. Bush era. Some career showstoppers from Olson’s private practice included arguing for wins in Bush v. Gore,  and Citizens United.

Olson’s involvement in this case arguing against presidential authority isn’t likely to be lost on the justices, and neither will his take on the Trump administration’s attempt to rescind DACA. Olson told the New York Times:

Executive power is important, and we respect it, but it has to be done the right way. It has to be done in an orderly fashion so that citizens can understand what is being done and people whose lives have depended on a governmental policy aren’t swept away arbitrarily and capriciously. And that’s what’s happened here.

Let’s remember, too, that SCOTUS’s decision to take up the DACA case was a surprise; the Court could easily have simply denied cert and waited until after the 2020 election. If a Democratic candidate wins, DACA would be reinstated and the case mooted. If Trump wins, the Court could point to executive authority and stay out of it.

Olson may not be the biggest star at the counsel table, though. Luis Cortes, a 31-year-old lawyer who graduated from the University of Idaho College of Law, will be there too. Cortes is himself a Dreamer. Cortes is the son of Mexican immigrants who was taken to the U.S. when he was just a year old. After his father was deported, Cortes stayed with his mother and siblings (who are American citizens). The DACA program was announced when Cortes was a 2L, and it had a significantly positive impact on the young lawyer’s life. If the Trump administration wins at the Supreme Court, Cortes’s work authorization will expire in 2021 and his future will remain far from certain.