Will William Barr Be Held in Contempt? | Law & Crime
Opinion 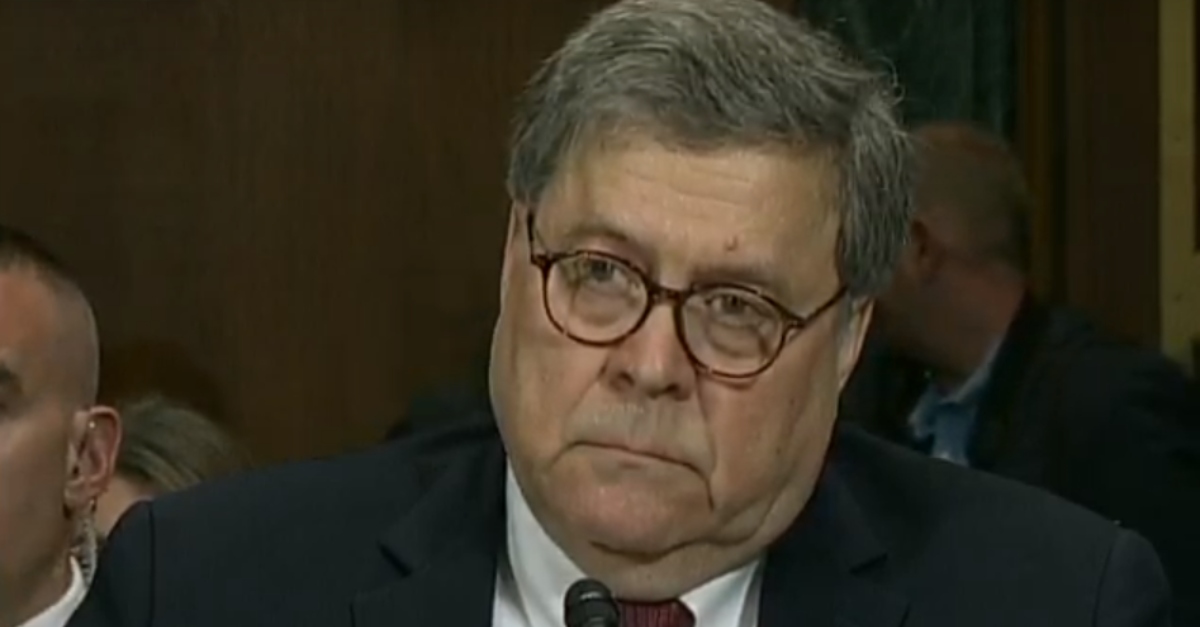 It appears that Attorney General William Barr is fearless. First, he gave a largely inaccurate “summary” of the Mueller Report to Congress, and then he feigned ignorance about Robert Mueller’s position on that summary. As I discussed earlier, Barr’s specific responses likely shielded him from committing perjury. Now, though, he’s ratcheting things up by flat-out refusing to appear as requested before the House Judiciary Committee.

Predictably, the Committee is not pleased with Barr’s absence, and contempt of Congress charges may be what’s next for our (soon-to-be-former?) AG. Speaker of the House Rep. Nancy Pelosi (D-Calif.) went so far as to say Thursday that Barr had committed a “crime” of lying to Congress, if you have any doubts about where this is heading.

He’s as worthless a witness as he is an attorney general. Subpoena his sorry ass, hold him in contempt when he’s a no-show, but don’t waste time over him. Call Mueller, McGahn, people who haven’t sold their souls and can help the nation get to the truth. https://t.co/Ke6TRqzrPa

Chairman Nadler just received a letter from Barr refusing to comply with our subpoena for the unredacted Mueller report & underlying materials. That is unacceptable. I will urge the Chairman to proceed w/contempt citation. This is extremely dangerous behavior from Trump and Barr.

But what does “contempt of Congress” even mean, and how would it all work?

Under 2 U.S.C.A. § 192, Congress can hold a person in contempt if that person, “willfully makes default, or who, having appeared, refuses to answer any question pertinent to the question under inquiry.” That basically means that any non-cooperating witness is fair game. Bottom line: when Congress asks you for testimony, you (usually) need to give it.

Congress’ contempt power isn’t unlimited; before a witness can be convicted for contempt of congress, we need to be clear that the matter Congress is seeking to investigate with that witness’ testimony is something that falls within the scope of Congress’ authority. Here, there’s no question that anything related to the Mueller Report falls easily within Congress’ jurisdiction. Congress itself charged the special counsel with investigating; it would logically follow that Congress has unfettered authority over managing the report of results of that investigation.

There is, of course, at least one major exception to a witness’ obligation to testify before Congress: when testimony has potential to constitute self-incrimination. In such a case, the rules work before Congress as they do in courtrooms; a person cannot be compelled to testify against himself if there would be potential criminal repercussions for doing so.

Theoretically, it’s certainly possible that Barr could blame his non-appearance on Thursday on his Fifth Amendment privilege against self-incrimination. He could, except that’s generally not how the Fifth Amendment works. The normal procedure is that a witness takes the stand, is asked a question, and then declines to answer that specific question on Fifth Amendment grounds. Simply being a no-show isn’t exactly the same thing. After all, not every question and answer combo has potential to expose Barr to criminal liability.

Speaking of liability, the penalty for contempt of Congress is a monetary fine of up to $1,000 (okay, not a huge deal for Barr), and up to 12 months imprisonment (decidedly, a much bigger deal).

For those who find it bizarre that a sitting attorney general could be cited for contempt, I remind you that, bizarre as it all seems, it’s happened before. Eric Holder, former Attorney General for then-President Barack Obama, was cited for contempt of Congress when he refused to turn over documents related to a botched ATF gun-smuggling investigation called “Operation Fast and Furious.” The circumstances and context of Holder’s contempt charge were certainly different than the situation with Barr – Holder had asserted Executive privilege over the requested docs – but if anything, the differences weigh against Barr.

The contempt charge against Holder stemmed from a request for documents, while Congress’ subpoena to Barr requests testimony. That’s significant because Holder’s claim — that the requested documents were protected by executive privilege — is weaker with respect to open-ended oral testimony requested by Barr.  Barr might be able to assert executive privilege with respect to some information, but it’s unlikely that he’d have a convincing privilege claim for anything and everything he might be asked.

Other high-profile government officials have also been held in contempt in the past. Remember the 2014 drama with Internal Revenue Service official Lois Lerner? She refused to comply with a subpoena issued by the Committee on Oversight and Government Reform in conjunction with an investigation of the IRS’ targeting selected political groups applying for tax-exempt status.

Lerner’s case has some direct parallels with Barr’s. Lerner had asserted her Fifth Amendment privilege as the basis for refusing to testify. However, the Justice Department later decided that the privilege wasn’t available to her, on the grounds that she waived it when she had made a statement to the committee earlier in the hearing. Later, the DOJ declined to prosecute Lerner for the contempt, and found that she had not waived her privilege after all — but the argument still gained quite a bit of traction during the Congressional proceeding. The waiver-of-privilege argument, however, could still work well for Barr; his testimony Wednesday may foreclose any valid assertion of privilege on Thursday.

Whether a Congress actually proceeds with a contempt charge against Barr, and what related executive vs. legislative branch arguments Barr raises are sure to be the debate topics du jour for the next news cycle.

Editor’s Note: This piece has been updated from its original version to include additional information about the contempt proceedings of Lois Lerner.