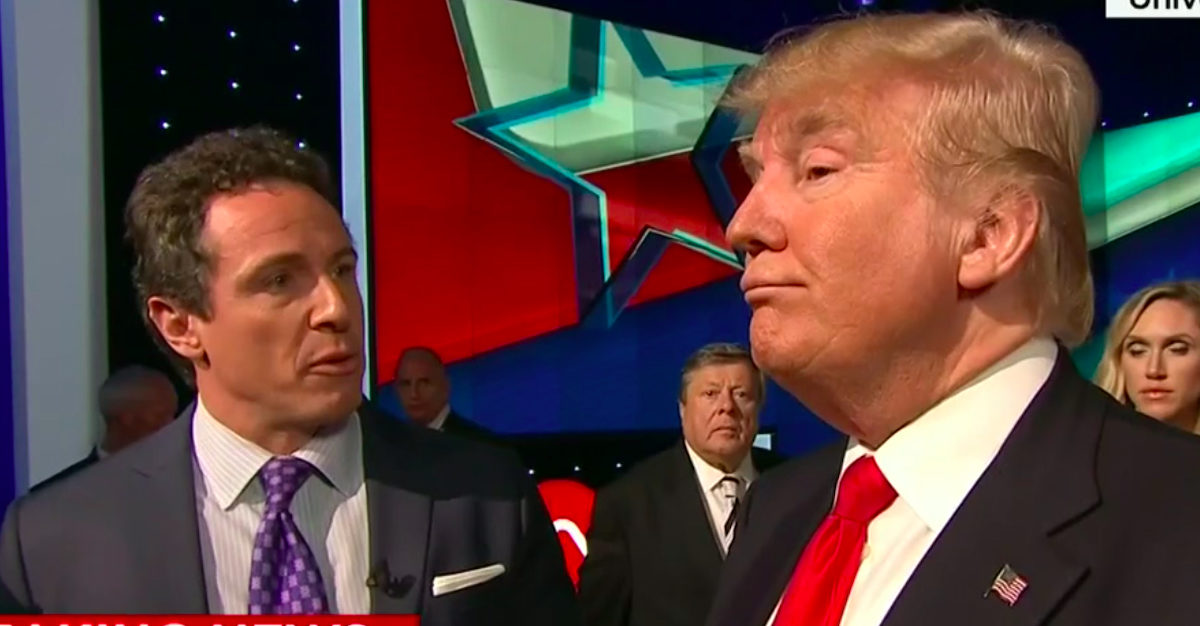 Well, that didn’t take long. It appears that President Donald Trump is already politicizing his support for “red flag” laws, Tweeting Tuesday that CNN’s Chris Cuomo was “nuts” and shouldn’t be allowed to have a gun.

“Would Chris Cuomo be given a Red Flag for his recent rant? Filthy language and a total loss of control. He shouldn’t be allowed to have any weapon. He’s nuts!” Trump said.

Cuomo has publicly stated that he is a gun owner on multiple occasions.

Trump was referencing a video that surfaced Monday of Cuomo confronting a man who called him “Fredo,” a reference to the Godfather character Fredo Corleone. The incident occurred in a New York bar on Sunday. The man in the furtively filmed the encounter was clearly attempting to get a rise out of Cuomo despite claiming that he thought the CNN’s anchor’s real name was Fredo.

In the wake of the mass shootings in El Paso and Dayton that left at least 31 people dead, President Trump and a number of GOP lawmakers came out in support of so-called ‘red flag laws.’ The state laws authorize courts to issue a special type of protection order which allows the police to temporarily confiscate firearms from people who are deemed by a judge to be a danger to themselves or to others.

“We must make sure that those judged to pose a grave risk to public safety do not have access to firearms and that if they do, those firearms can be taken through rapid due process. That is why I have called for red flag laws, also known as extreme risk protection orders,” Trump said last week during a televised address from the White House.

However, despite the Cuomo yelling and even threatening his antagonizer, none of his conduct as depicted in the video would be likely to trigger any state’s red flag law.  For starters, the incident occurred in New York, where the new ‘Red Flag’ law doesn’t even take effect until August 24th.

Under New York’s law, which was signed into law by Chris Cuomo’s brother, Governor Andrew Cuomo in February, applications for special protection orders prohibiting the purchasing or possession of firearms can only be made by police officers, a district attorney with jurisdiction over the area, a family or household member of the person against whom the order is sought, or a school administrator.

According to Democratic Assemblywoman JoAnne Simon, who sponsored the legislation, New York’s red flag law is not designed to deprive firearms from anyone for simply losing their temper.  “The goal is to get guns out of the hands of people who really, truly shouldn’t have them because they are a danger to themselves or others,” Simon recently told the Buffalo News.

The order applications must include sworn statements and function much like temporary restraining orders. Initial orders will only be approved if an applicant can show “probable cause” that the subject “is likely to engage in conduct that would result in serious harm to himself, herself or others.”

After an initial order is issued, the person against whom the order is in effect is entitled to a hearing within six days, at which point the applicant must show that the subject is likely to harm themselves or others by “clear and convincing evidence,” the same standard of proof the state requires to involuntarily commit someone to a mental health facility. Following the hearing, a judge can put the protective order in effect for a maximum of one year.

As NBC News political reporter Benjy Sarlin noted, Trump’s comment is more akin to “a parody of what opponents of red flag laws say they’re worried about” than to how the laws actually function.

This is like a parody of what opponents of red flag laws say they're worried about https://t.co/5ojHrCJTep