‘Faithless Elector’ Scenario Disastrous Way to Save Us From President Trump 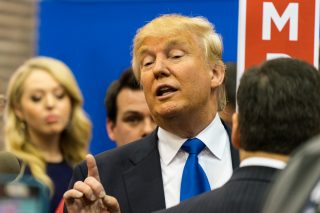 Guys, it’s time to stop. This whole “Faithless Elector” fantasy has officially gone too far. We now have Harvard professors rallying members of the electoral college to band together and collectively save the world from the unmitigated disaster that is President Trump. Normally, an attempt to create a last-minute coup based on a quirk of Constitutional law would amount to nothing more than a plot point in a cheesy network drama – too silly for cable, but perfect for CBS (so long as it was explained via authoritative voiceover). But in post-Trump 2016, more than a few Americans are desperately pinning their hopes on December 19th – the day on which Trump will actually be elected the 45th President of the United States.

If this had been a typical election cycle, the 306 Republican and 232 Democratic electors would convene on the 19th, and cast their electoral votes for their respective party nominees; with 306 votes for Trump, and 232 for Clinton, Trump would officially (read, cataclysmically) be elected our next president. Theoretically, if 37 of the 306 Republican electors refused to cast their vote for Trump (and did basically anything else), neither candidate would get the required 270 electoral votes to win the presidency. The whole thing would then be tossed over to the House of Representatives to decide who gets the iron throne.

Procedurally, there are a couple of problems with this quick-and-easy solution to escaping our collective orange fate. Most significantly, the votes of electors are governed by state law. There are actual statutes on the books that govern the specific responsibilities of electors, and in some cases, that specifically spell out what happens if an elector refuses to cast a vote for his or her party’s nominee. For example, under Michigan law, an elector who goes rogue will create an automatic “vacancy,” just as if he or she had died prior to voting day; that vacancy gets filled right away by someone who will vote for the nominee, so there’s not much wiggle room.  Michigan Election Law Act 116 of 1954 reads:

“Refusal or failure to vote for the candidates for president and vice-president appearing on the Michigan ballot of the political party which nominated the elector constitutes a resignation from the office of elector, his vote shall not be recorded and the remaining electors shall forthwith fill the vacancy.”

Based on standard statutory interpretation, electors in states with similar laws simply cannot “flip” and thereby change the course of an election. Other states, such as Washington, have laws that impose a civil penalty on electors who choose to side with conscience over duty. The differences in state laws create a major quagmire, and even with Professor Lessig’s “free and confidential legal support” offered to electors who wish to “vote their conscience,” the outcome isn’t entirely predictable. To make matters worse, there could (and probably would) be disagreement among officials from the same state; the natural result would be Congress receiving two separate sets of electoral votes. At that point, all hell would break loose, both houses of Congress would start fighting with one another, and we’d probably be back to where we were in 2000, waiting for the Supreme Court to decide who is actually the president. To put it mildly, that kind of uncertainty is just not a good idea for us. As noted election law expert Edward Foley put it:

The procedural messiness, as tiresome and costly as it would certainly be, isn’t even the worst part of the faithless elector scenario. The real problem is that it’s a destructive solution to an equally destructive problem. This week, I’ve been binging Designated Survivor on ABC – a political drama in which Kiefer Sutherland plays an unassuming HUD Secretary thrust into the Oval Office after the entire federal government is killed in an attack on the Capitol during the State of the Union address. Fictional tragedy aside, it’s a great premise, and it raises the provocative question of what we would choose to do if we were faced with the decision of rebuilding the government from scratch. It’s tantalizing to imagine a total wiping of the slate, especially now that we have a President Elect who is hell-bent on appointing the worst possible person to every cabinet position. But I hate the idea of the electors taking it upon themselves to undo November’s election on December 19th for the same reason I’m annoyed that by Episode 3, Keifer still hasn’t appointed a new Supreme Court or Vice President. Solutions made within our existing framework will always be better than those made outside it. As Americans, our patriotism is deeply rooted in the knowledge that this country was designed by great minds seeking to create an ideal society. There is, and should always be refining to be done; but a wholesale discarding of the rule of law is not a wise response to the sad truth that our election was susceptible to manipulation by a charlatan.

Change, even sweeping change, is contemplated by the Constitution. We can, and in my view, should toss out the Electoral College altogether. Many states have (years before the 2016 election) passed legislation looking to do just that. But even an elimination of the Electoral College via Constitutional Amendment is far less corrosive of our Democratic system than would be a rebellion spearheaded by faithless electors. Most Americans wouldn’t recognize their electors if they were face-to-face with them; it’s therefore ludicrous to turn over the fate of our country to them.  A shift to a straight popular-vote outcome would put the power in the hands of voters, whereas noncompliant electors would hand that power over to Congress. A Constitutional Amendment is a difficult process, but is one founded in respect of law, whereas faithless electing is just the opposite.

The despair felt by so many Americans right now is palpable and well-reasoned. Comforting as it may be to daydream about a last-minute reprieve from what’s to come, its price would simply be too high. Bring on the election, inauguration, and heck, maybe even an impeachment – but let’s leave the faithless electors out of it.