FACT CHECK: Spicer Tattles on Schumer For Getting It Totally Wrong About Neil Gorsuch… Who’s Right? 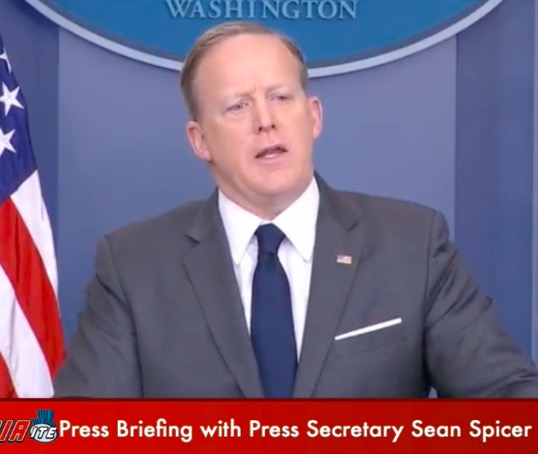 In Sean Spicer’s daily press briefing Monday, he declared (apparently, through a mouth full of lettuce) that Chuck Schumer got it totally wrong about Neil Gorsuch.  Technically, Spicer was sort of correct in his evaluation, in the same sense that it’s technically Springtime right now, even though we’re all still wearing winter coats and boots.

Let’s examine. On Monday, Spicer, eager to tattle on Sen. Schumer for his “obstructionism,” said:

“Schumer argued, quite misleadingly that the senate ‘required a 60 vote threshold’ of ‘every supreme court nominee.”

That’s almost true. On February 1, Schumer actually made the following statement on the Senate floor, while speaking about Judge Neil Gorsuch:

“If this nominee cannot meet the same standard that Republicans insisted upon for President Obama’s nominee, 60 votes in the Senate, then the problem lies not with the Senate but with the nominee.”

Minutes later, Schumer re-took the floor and made the following technical correction to his statement:

“I am coming back to the floor to correct the record about my earlier comments, when I said that Republicans ‘insisted’ on 60 votes for each of President Obama’s nominees. Sixty votes is a bar that was met by each of President Obama’s nominees. At the time, there was no need for a cloture vote, because we knew that each of them would garner over 60 votes.”

Schumer’s self-correction clarified the record in a way that was necessary only in the most procedural of senses. Most Americans paying attention to the upcoming Gorsuch votes understand that Schumer’s statement was meant to describe a predictable game of voting ping-pong, and not to mischaracterize the rules of a majority vote.

To confirm Neil Gorsuch as a Supreme Court justice, a simple majority (51 out of 100 Senators) in the Senate is all that is required by the Constitution. Likely, that simple majority will be easy to attain given that Republicans comprise 52 seats in the Senate, and that it’s unlikely that all 46 Democratic Senators and 2 independent Senators will vote against Gorsuch. However, in order for any group to win a vote, that vote must actually occur. Democrats seeking to avoid a vote on Gorsuch have the option of rallying together and filibustering the vote. The filibuster simply extends the debate process on Gorsuch, ad infinitum. As the filibusterers take to the Senate floor for hours without lunch or bathroom breaks, the only way out is if 60 or more Senators vote to end debate by invoking cloture (known colloquially as “guillotine” under Senate Rule XXII).

If there aren’t 60 Senators reading to invoke cloture, then the filibuster may have to simply fizzle out on its own. When Schumer mentioned the 60 votes, he was pointing out a certain mathematical reality: if more than 60 Senators support Gorsuch, any filibuster attempt will likely fail. Without those 60 votes, there’s at least the possibility that the filibuster will hit its mark and grab a few votes away from confirmation. Schumer was also correct in stating that most recent (and all of President Obama’s) Supreme Court justices were confirmed with more than 60 votes – at least those who actually got a confirmation hearing.

In context, Schumer’s call for a 60-vote approval as “the same standard” met by the Obama nominees is correct, even if it’s not an actual requirement. Schumer’s critics are right to point out, however, that some justices have been confirmed without such margins. In 2006, Samuel Alito was confirmed 58-42. In 1991, Clarence Thomas was confirmed 52-48. In the 1800s, Justices Lamar, Matthews, Clifford, and Smith were confirmed with 32, 24, 26, and 23 votes respectively; those votes, however, represented majority of the overall Senate at the time.

So was Spicer being truthful when he called Schumer “misleading”?

Only if Schumer’s use of the word “standard” was understood or meant to mean “legal requirement” – which it most certainly wasn’t. Schumer was likely using the word “standard” as in “double standard” – like the one Republicans applied to Merrick Garland when they refused to even allow him a confirmation hearing.

Of course, there’s also the small matter of the “nuclear option.”  My LawNewz colleague Rachel Stockman gave this detailed explanation of what it will mean if Mitch McConnell “goes nuclear” to override any filibuster by the Democrats.  If such drastic measures are taken, and the Senate rules themselves are changed, 51 will become the new 60, and Gorsuch will shepherd in a new era of filibuster-free politics.