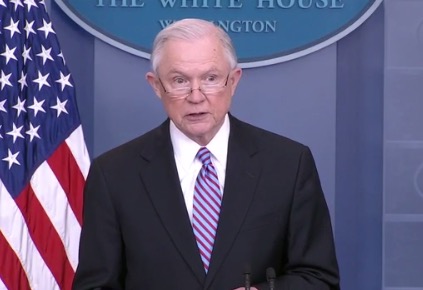 At a surprise appearance at Monday’s White House press briefing, Attorney General Jeff Sessions threatened all so-called sanctuary cities, telling them that, if they did not comply with 8 U.S.C. 1373, not only would they not receive any new grants, but that the Department of Justice would attempt to claw back grant money they had recently received.

However, if Sessions is forced to follow through on this threat, any such action may unconstitutionally violate both states’ rights and Congress’ rights, and the sanctuary behavior about which he complained may not even violate the very statute he cites.

Nevertheless, in part because cities may have difficulty obtaining a prompt judicial ruling on the constitutionality of the threatening statement, or even of a specific threat to cut off funding for an individual named city, and because of the huge financial risks, legal costs, and uncertainty of challenging governmental actions, many additional jurisdictions – despite their defiant claims to do without federal funding – are likely to cave in.

After all, many taxpayers may not be happy taking such a dangerous stand simply to protect the small minority of people who are illegally in their jurisdiction.

As explained below, the entire program, beginning with President Trump’s executive order stating that funds should be cut off to so-called sanctuary cities – if it is interpreted as many suggest, and if a court is ever able to rule on the issue – may be an unconstitutional violation of both states’ rights and Congress’ rights.

Already Florida’s largest county, Miami-Dade, long known for welcoming immigrants, has ordered jails there to “fully cooperate” with Trump’s order, and other jurisdictions appear to be considering it.

Also states have begun moving to pressure localities to begin cooperating with federal immigration enforcement; a move likely to be strengthened and expanded as a result of Sessions’ announcement.   These states include, Iowa, Kansas, Kentucky, North Carolina, Pennsylvania, Texas, Virginia, and Wisconsin.

Ironically, Maryland is considering becoming a sanctuary state, despite a recent well-publicized alleged rape of a 14-year-old girl who was forced to share a 9th grade class with two much older male students who probably should have been detained and then deported. Indeed, Sessions specifically referred to the Maryland Law Enforcement and Trust Act, which passed the House of Delegates last week and is awaiting Senate action.

If, as some fear, Sessions’ threat would threaten funding for cities which claim sanctuary status because they tell police not to question people about their immigration status, and don’t honor detainer requests to hold people in jail for immigration purposes, it may be unconstitutional on several grounds.

First, it arguably violates the long-standing principle that the federal government cannot, consistent with the Tenth Amendment, “commandeer” or otherwise require local officials to enforce federal law. This principle dates back at least to a 1842 Supreme Court decision which held unconstitutional a requirement that states assist federal officials to capture runaway slaves.

It was also reinvigorated much more recently, in a 2012 ruling, that states could not be pressured into expanding Medicaid by a threat that they would otherwise lose some federal funds – the same coercive method threatened by Sessions – except in that case the threat was one mandated by Congress, and also signed into law, not a mere presidential order.

Second, the Court has said that conditions may not be imposed on federal grants unless they are “unambiguously” stated in the statute’s text.  The purpose is “so that the States can knowingly decide whether or not to accept those funds,” and not accept funding now only to suddenly find new strings attached later.

Few if any existing grants have explicit conditions related to providing sanctuary.  Moreover, the conditions, if any, seemingly have to be passed by Congress.

Allowing a president or an attorney general to suddenly cut off funds based solely upon his own whim, without any congressional approval, could create a very dangerous precedent undercutting Congress’ authority (under separation of powers) as well as federalism (upholding state’s rights).

For example, it could permit a Democratic president to force states to do what a Republican dominated House and Senate might oppose, or visa versa.

Suddenly announcing new conditions, and then seeking to claw back money cities have already received and probably have already spent under a grant, would seem to create an even more serious constitutional problem.

Moreover, since the order issued by Trump, and mentioned several times today by Sessions, provides for funds to be cut off only to “jurisdictions that willfully refuse to comply with 8 U.S.C. 1373,” it’s not clear if it would even apply to most “sanctuary cities.”

But since sanctuary cities usually simply have police not question people about their immigration status, officials would have no citizenship and/or immigrant status information available to share which would be restricted by 1373.

Even more clearly, 1373 has nothing to do with refusing to honor detainers.

Many experts commenting on the possible unconstitutionality, or uncertainty about the applicability of the order, fail to also note that it may be difficult if not impossible for sanctuary cities to get a court to rule on these issues, especially in a timely manner, for a number of reasons.

The first is the administrative law principle known as “ripeness,” which says that courts ordinarily should not address legal issues until they are ripe – in other words, sufficiently developed, with the facts clear enough, for a court to rule knowledgeably and authoritatively.  This applies most strictly when constitutional issues are raised.

Here, since the very meaning of the order, its possible applicability to different so-called sanctuary activities, and how federal officials will interpret and seek to enforce it are all unclear, courts may well decide that the issues – especially those related to constitutionality – are just not yet ripe enough at this point for adjudication.

For example, if the agency provides for hearings, these hearing should occur before any court rules. Only then, after the agency has rendered a final decision at the highest law, should a court attempt to decide important legal issues, especially those involving possible unconstitutionality.

Here, each threatened city almost certainly will be entitled to a hearing before funds are finally terminated, so cities may have to participate in such a hearing before they can get relief from a court.

Such hearings can be lengthy, and require the expenditure of large amounts of taxpayer dollars.

Thus, despite their claims now to the contrary, many cities might be unwilling to have this Sword of Damocles hanging over their heads while they go though a lengthy expensive hearing process, often with their very survival hanging in the balance, simply to protect people illegally in the country.

WHY THE THREAT MAY WORK

That means that Session’s threat is likely to be effective even if it is unconstitutional. Entities faced with possible financial devastation from funds being cut off are rarely willing to take a risk, and often find that it is much easier to simply comply than to take a chance and fight.

Indeed, this effect is so well known that it goes by the name “regulation by raised eyebrow” – i.e., an agency need do nothing more than suggest possible adverse consequences, and those subject to a possible sanction all too often comply immediately.

This was certainly true regarding any threat to broadcasting licenses. For example, when the Federal Communications Commission simply suggested that playing songs on the radio which “glorified” the use of illegal drugs was not consistent with the public interest, many stations changed their play list.

Although the agency’s action arguably infringed upon important First Amendment rights, it was upheld – with the court citing a case I won in the Court of Appeals (Banzhaf v. FCC).

In another case which I orchestrated, several TV stations in the DC area scrambled to hire on-air reporters who were African American when the license of one station was threatened on this and other grounds – even though the activists’ legal challenge was eventually dismissed.

TV stations were simply not willing to risk the possible loss of their very valuable broadcast licenses, even though the odds that this would happen were small, and to have that risk hanging over their heads during years of litigation.

Certainly this has also proven to be true with regard to colleges which have spent hundreds of millions of dollars to set up programs to deal with rape, based solely upon mere suggestions by the Department of Education, with no more than an implied threat to their funding.  This falls far short of the explicit threat of loss of funding coming directly from the president in the sanctuary cities executive order.

So, even if Trump’s executive order and Sessions’ threat are in fact unconstitutional, no court may ever be able to make that ruling, at least not in a timely fashion.  Thus, many if not most cities may have to comply anyhow, especially if enough taxpayers make it clear that they do not want a city to take such enormous risks in a questionable effort to protect illegal aliens.