Coronavirus Proves What We Knew All Along: Too Many People Are Prosecuted for BS Offenses 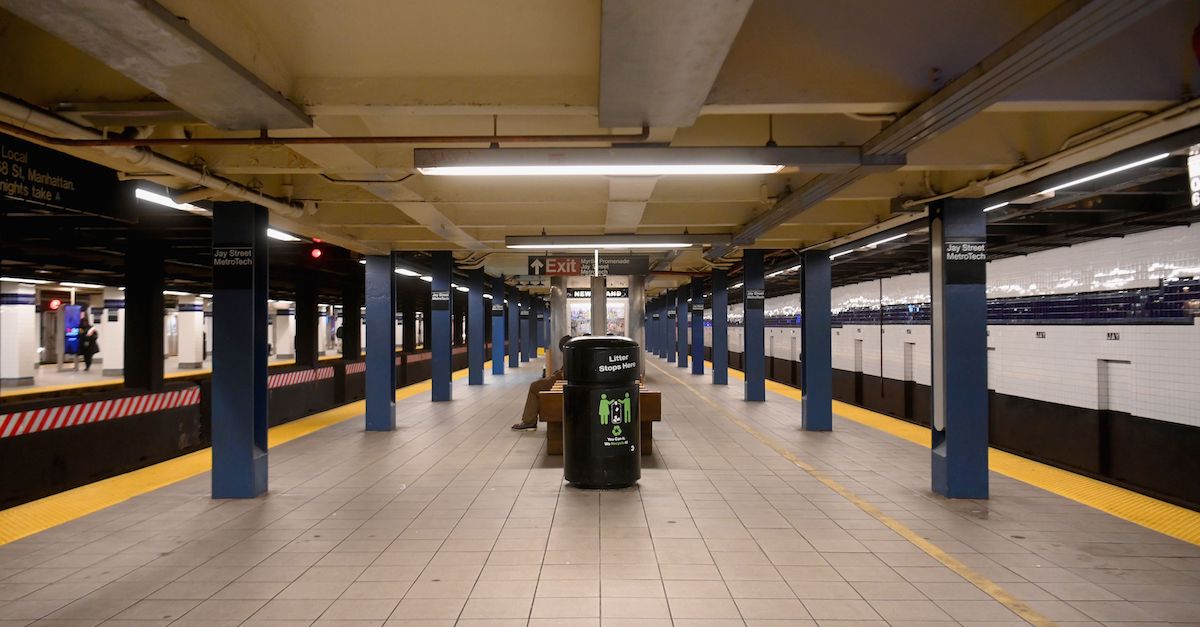 A near empty subway station in downtown Brooklyn on March 17, 2020 in New York.

Americans across the country are telecommuting to minimize the spread of COVID-19, as we divide ourselves into the only two categories that appear to matter: essential and non-essential. Police, of course, are more “essential” than ever, as we move toward mandatory curfews and quarantines. But what about the rest of the machine of law enforcement? I’m talking about prosecutors, probation officers, court officers, and judiciary personnel. Where do they fall on the spectrum of what’s needed to keep our world functioning safely?

Wisdom on the street appears to favor minimizing the use of prosecution for low-level offenses. Brooklyn District Attorney Eric Gonzalez announced Tuesday that his office will no longer prosecute “low level offenses that don’t jeopardize public safety.”

Gonzales isn’t the first to call a moratorium on prosecutions. Philadelphia District Attorney Larry Krasner has called for a major reduction in arrests for non-violent crimes, and Seattle District Attorney Dan Satterberg announced that his office would only file charges in exceptionally violent cases.

Police in Fort Worth, Texas have also announced that they plan to stop arresting people for low-level offenses, and will simply issue tickets instead. And like many police departments around the country, Denver and Aurora, Colorado police will no longer send an officer to take reports on suspected low-level incidents.

A county in Ohio has gone yet further and released the first wave of likely hundreds of low-level offenders from county jail, citing overcrowding and lack of sanitary conditions.

Does all this mean local government officials are resigned to welcoming a period of lawlessness during the coronavirus outbreak? No. What it means is that those on the front lines of prosecution and corrections know that many of these “low-level offenses” have always been overkill. This is just the prosecutorial version of “tightening our belts.”

The American criminal justice system has, for years, been unnecessarily clogged with non-violent offenders who are overwhelmingly young and poor people of color. Partisan debate and media talking points have raged over the existence, the cause, and the solution to this societal problem. But in this critical time, as we all make choices for what is truly essential and what can safely fall by the wayside, important truths rise to the surface. It is safer for many non-violent offenders to be part of society than it is for them to be in prison.

Today, 31 top prosecutors across the country issued a joint statement, saying they are committing to take meaningful steps to reduce mass incarceration and prevent or slow the spread of COVID-19 in jails, prisons, and courtrooms.

One group of prosecutors banded together and laid it on the line. They wrote, in a joint statement:

Our country’s jail and prison populations have exploded over the last few decades, a result of people being prosecuted more often for less serious behavior; an increase in the severity of sentences imposed; and our cash-based pretrial detention system, which keeps hundreds of thousands of people in jail prior to any determination of guilt and merely because they can’t afford to pay bail. Recently, immigration detention has reached record proportions, despite apprehensions at the border being far below historic highs. The result of these practices is overcrowded jail, prison and immigration detention facilities that force people together in close quarters without access to proper hygiene or medical care, sometimes living barracks-style in gyms or other open spaces, breathing the same recycled air for up to 23 hours per day. These conditions are fertile ground for the spread of a virus like COVID-19.

The stats they cited — 2.3 million adults and children locked up, and 10.6 million new jail admissions annually —  seem spectacularly bad in the context of COVID-19; to me, though, they’re pretty grim in normal times, too. Coronavirus brings things into sharp focus, but even in the ordinary course,  there are many, many downsides of prison time. Why are we ever locking so many people who don’t “jeopardize public safety”? More to the point, why are prison health and safety conditions so appalling?

The 31 prosecutors poignantly phrased their mandate:

We, as elected prosecutors, have an obligation to protect the safety and wellbeing of everyone in our community, regardless of their race, ethnicity, or country of origin. Those obligations extend behind prison walls.

At some point, COVID-19 will be behind us, and it’ll be our turn to do what’s right.