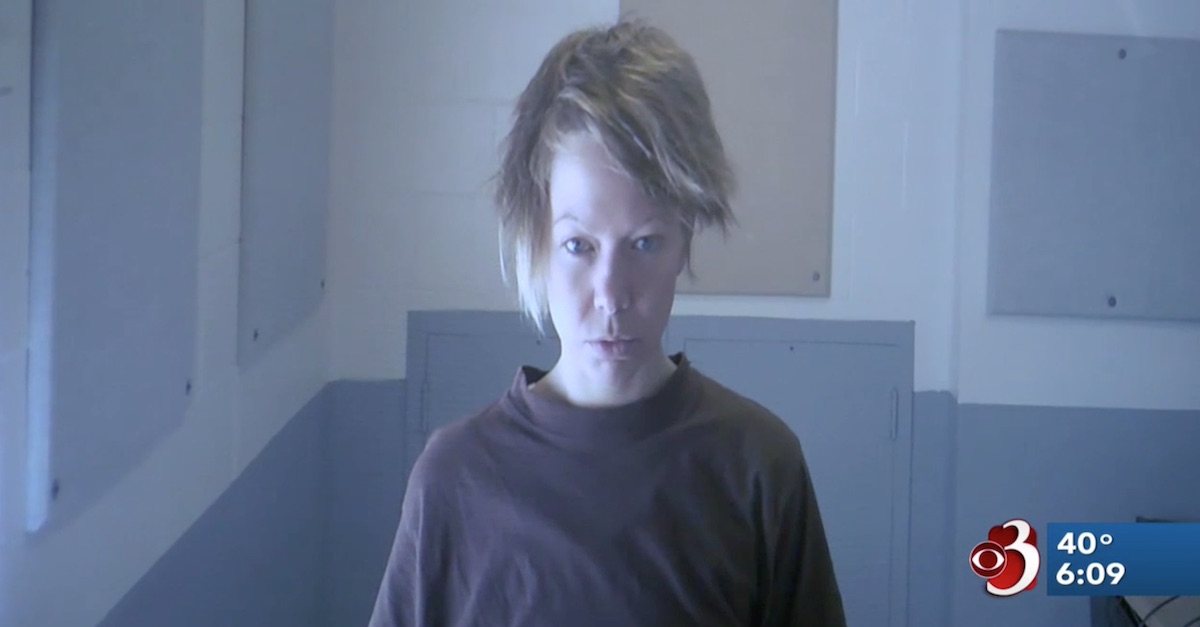 A Vermont woman allegedly slit her 45-year-old boyfriend’s throat at the apartment they shared, then went to her parents’ house to take a shower–only to report the killing to the police two days after the fact.

Averil Beliveau, 30, has pleaded not guilty to second-degree murder in the slaying of Cameron Faling. According to local news outlet WCAX, Beliveau said she killed Faling in Bolton last Thursday night, slept in her car early Friday, went to her dad’s house to take a shower and change her clothes, returned to the scene of the crime and slept there, then called 911 on or around 7 a.m. on Saturday.

During that call, Beliveau allegedly admitted she “slit [Faling’s] neck.” When police arrived on scene, they found that the Faling was dead and that Beliveau was drinking tea in a room with blood everywhere.

While Beliveau claimed that the relationship of less than a year was abusive and that what was done was done in self-defense, Chittenden County authorities said the evidence didn’t match Beliveau’s statements.

For example, the defendant claimed Faling choked her. Authorities said there’s no evidence to support that and that, actually, it was the deceased who had defensive wounds. What’s more, Beliveau allegedly admitted concealing a hunting knife and approaching Faling when she killed him. Investigators believe she may have slit Faling’s throat from behind.

“There are some concerns about her mental health. That could make her a danger to the public,” George added.

VTDigger focused more on Beliveau’s claims of abuse, as well as some of her behavior in the lead-up to the killing.

She claimed that Faling battered and beat her during the summer of 2019, but said she didn’t call police. She also claimed Faling broke one of her fingers in Nov. 2019. Beliveau also allegedly admitted she recently bought two knives, including the homicide weapon, to defend herself against alleged abuse–and for another bizarre reason:

During the interview, Beliveau said she had purchased two knives, including the one she used Thursday night, because she recently had eye surgery and claimed the surgeon intentionally sewed her eye smaller, and she needed to cut it to make it bigger so she could see.

“At this point I have been scared of him attacking me, and I’m like no, because I have a knife now kid,” she told detectives. “He doesn’t technically know I have a knife, but I know I have a knife. … I keep warning him, like Cam don’t try to attack me, like don’t violently come at me. Don’t try to strangle me. My body is bruised and broken enough; you have done enough.”

Beliveau is being held without bail at Chittenden Regional Correctional Facility.