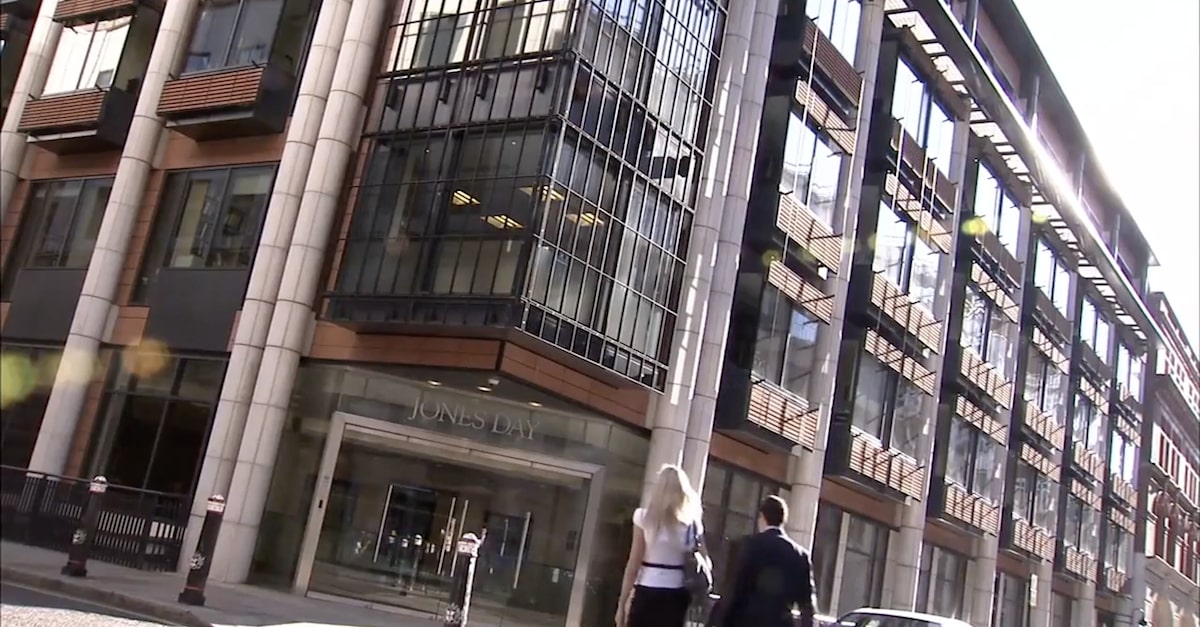 An office of the Jones Day law firm from a promotional video on their website. (Screenshot)

When former President Donald Trump submitted candidates for a special master to review documents seized from Mar-a-Lago, one of his two choices was from the firm Jones Day, whose attorneys filled his administration. That nominee ultimately didn’t make the cut, but make no mistake: the firm’s fingerprints are still seen throughout Trumpworld.

Don McGahn rejoined the firm after his tenure as Trump’s White House counsel, and he helped Sen. Lindsey Graham (R-S.C.) in his failed effort to fend off a Georgia prosecutor’s subpoena in an election interference investigation. Trump’s former solicitor general Noel Francisco is the firm’s partner-in-charge in Washington, and a host of other top lawyers from the firm filled the 45th president’s Department of Justice, Commerce Department, the Federal Energy Regulatory Commission, Consumer Products Safety Commission, and other agencies.

The definitive account of how the firm became the former president’s go-to legal shop — sometimes, to the chagrin of some inside the firm — New York Times investigative reporter David Enrich’s book Servants of the Damned: Giant Law Firms, Donald Trump, and the Corruption of Justice is much more than a chronicle of one firm’s history with the MAGA movement. It shows how that firm’s evolution from its origins in Cleveland to an international powerhouse reflects broader trends in the legal industry, hearkening back to a time before the law was viewed as a business.

In a lengthy conversation reflecting the book’s investigative, historical and philosophical journey, Enrich opens up about his findings on Law&Crime’s podcast “Objections: with Adam Klasfeld.” He also discusses the uproarious findings of his chapter, “Trump’s Stallion,” on how — long before his presidency — the real-estate tycoon tried to pay a hefty legal bill with a horse.

“Trump, of course, has this very well-deserved reputation going back decades of stiffing many people he works with, it’s not just lawyers,” Enrich notes. “I mean, it’s contractors, it’s banks, and the list goes on. And there was one anecdote in particular that circled around Jones Day as they debated whether this was even worth the risk, because they probably wouldn’t get paid.”

As Enrich’s book recounts, the anecdote involved a white-shoe law firm that racked up a $2 million legal bill that Trump tried to pay with a $5 million stallion.

“The lawyer who was standing there in the office was speechless,” Enrich recounts. “And when he regained the capacity for speech, he said, ‘This isn’t the 1800s. You can’t pay me with a horse.'”

It wasn’t the only time Jones Day lawyers questioned their relationship with the former president.

After the 2020 presidential election, the firm came under public pressure as Trump tried to overturn Joe Biden’s victory through the court system. On Nov. 13, 2020, protesters gathered in front of Jones Day’s New York City office with an inflatable rat shaped like Trump and placards branding their lawyers “Liars & Traitors” who file “Clown Suits.” 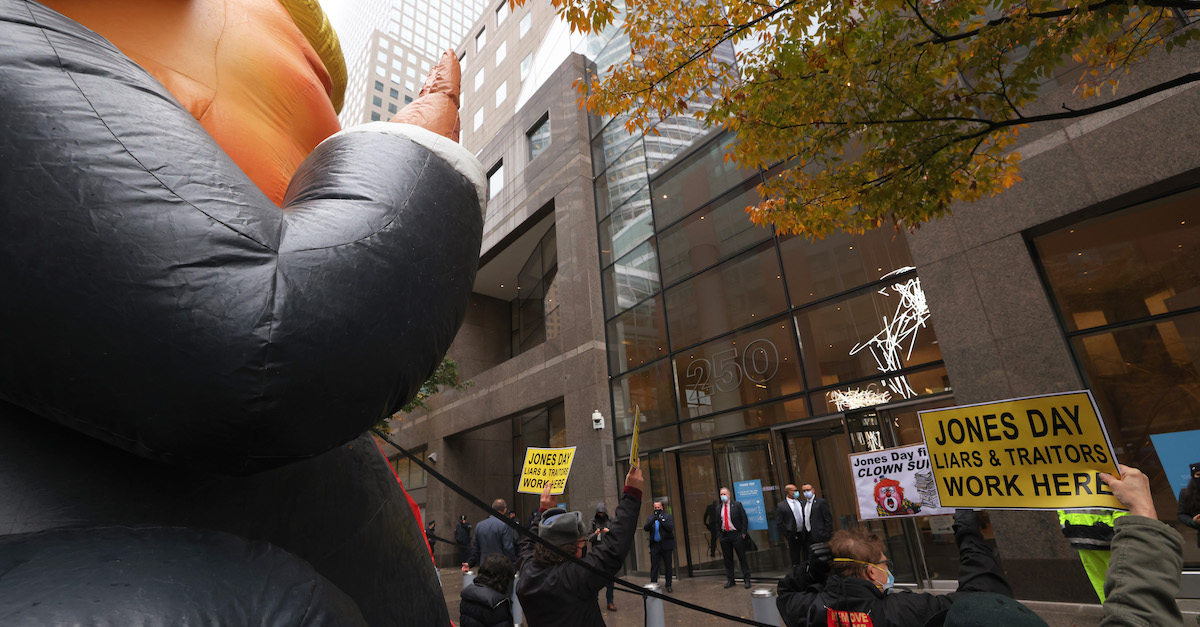 Demonstrators hold up signs next to an inflatable giant rat in the likeness of U. S. President Donald Trump outside the NYC office of Jones Day law firm on Nov. 13, 2020 in New York City. (Photo by Michael M. Santiago/Getty Images)

“Jones Day, in the fall of 2020, shortly before the election, was involved in litigation in Pennsylvania, which, of course, is probably the most important swing state in the election, that was designed to basically make it harder for people’s absentee ballots to be counted,” Enrich noted. “It was not one of those lawsuits that came after the election that were just, you know, these garbage lawsuits filed by people like Sidney Powell that had that were just reckless and completely frivolous. And these were fairly sophisticated legal and constitutional issues that are being litigated.”

Still, the criticism and reputational damage stung. The firm released a statement emphasizing that it did not participate in lawsuits alleging false voter fraud claims, but turmoil still brewed inside the firm. Some of it, uncommonly in its culture of secrecy, bubbled over to the public. Its prominent attorney Ben Ginsberg, who helped propel George W. Bush into office as one of the legal minds behind the Supreme Court’s ruling in Bush v. Gore, found Trump’s attack on the election beyond the pale — and he said so, publicly, in a Washington Post editorial and ultimately, in testimony to the Jan. 6th Committee.

The book’s view inside the firm extends far beyond Trump, peering into clients like R.J. Reynolds in the Big Tobacco litigation, Purdue Pharma and Walmart in the opioid crisis, and others. In these passages, Enrich engages with the complicated ethics of modern legal industry.

Just as every criminal defendant is entitled to competent and zealous representation, Enrich added: “I think we can even stipulate for argument’s sake that the same could be true for a company.”

“What I found fascinating is looking at the ways, increasingly, many of the services that big law firms provide to big companies has nothing to do with the legal services to which they’re arguably constitutionally entitled,” Enrich notes.

Examining those boundaries, Enrich charts the evolution of the modern legal industry from a profession of public-spirited officers of the court into multibillion-dollar businesses. This trend, the book shows, mirrors Jones Day’s journey itself, before it went national and international, and before the Supreme Court unleashed lawyers from participating in advertising.

“I think it’s always valuable to add transparency and sunlight to corners of the world and powerful institutions that have not been exposed to that much sunlight and transparency,” Enrich noted. “And I don’t think there’s a better example of that than the legal profession right now, which has done such a good job over the years of cloaking itself and secrecy. And I think that has not been very healthy.”

Servants of Damned takes its title from one of the manifestations of the sea changes in law: the emergency of a legal press covering firms as an industry. In 2004, The American Lawyer wrote of Jones Day that the firm “defends the powerfully damned and the damned powerful,” a pull quote in the book’s inscription.