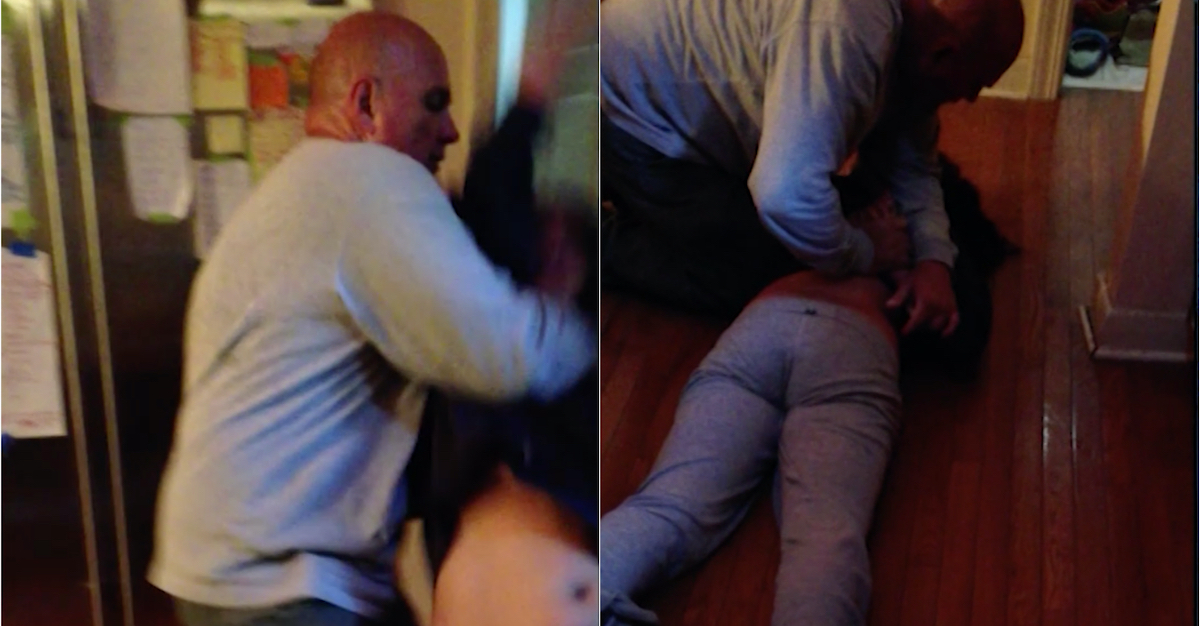 Listen to the show wherever else you get your podcasts, and subscribe.

Some four years ago, a reporter learned from fellow Sarah Lawrence College alumni about a “troubling” website about an ex-student there. The website, whose address had been in the student’s name, looked like an attempt to blackmail her with written and taped false confessions. Two reporters researched that lead extensively before publishing an exposé titled “Larry Ray and the Stolen Kids of Sarah Lawrence.”

The central figure in the article, Lawrence Ray, is now standing federal trial in Manhattan on a 17-count racketeering indictment, and the woman in the website, Claudia Drury, has been testifying against him for three days. She claims that Ray forced her into prostitution to the tune of $2.5 million over the course of four years, in key testimony for Ray’s sex trafficking count.

On the latest episode of Law&Crime’s podcast “Objections: with Adam Klasfeld,” the authors of the New York Magazine article that first uncovered the unsettling case—Ezra Marcus and James Walsh—describe the origins of their discovery and their impressions of the ongoing federal trial.

“The Architect of His Own Prosecution”

Referring to the tip about the website that started it all, Marcus said: “It was circulating through the alumni community and just people being like, ‘What’s going on here?’ I mean, this stuff is seriously unsettling.”

“I started talking to her friends, people who’d known her, and other people who were in this group,” Marcus continued. “People were sort of saying, ‘There was this older man who had moved into this dorm, and it had made a lot of people uncomfortable.'”

As he reached out to those who lived in that dorm some of eight years earlier, Marcus said, he stumbled upon what he described as a “fascinating, troubling story.” The tale of Ray’s encounters with Sarah Lawrence students certainly alarmed federal prosecutors, who later charged the central figure of the article of racketeering, sex trafficking, forced labor, extortion, and other crimes. 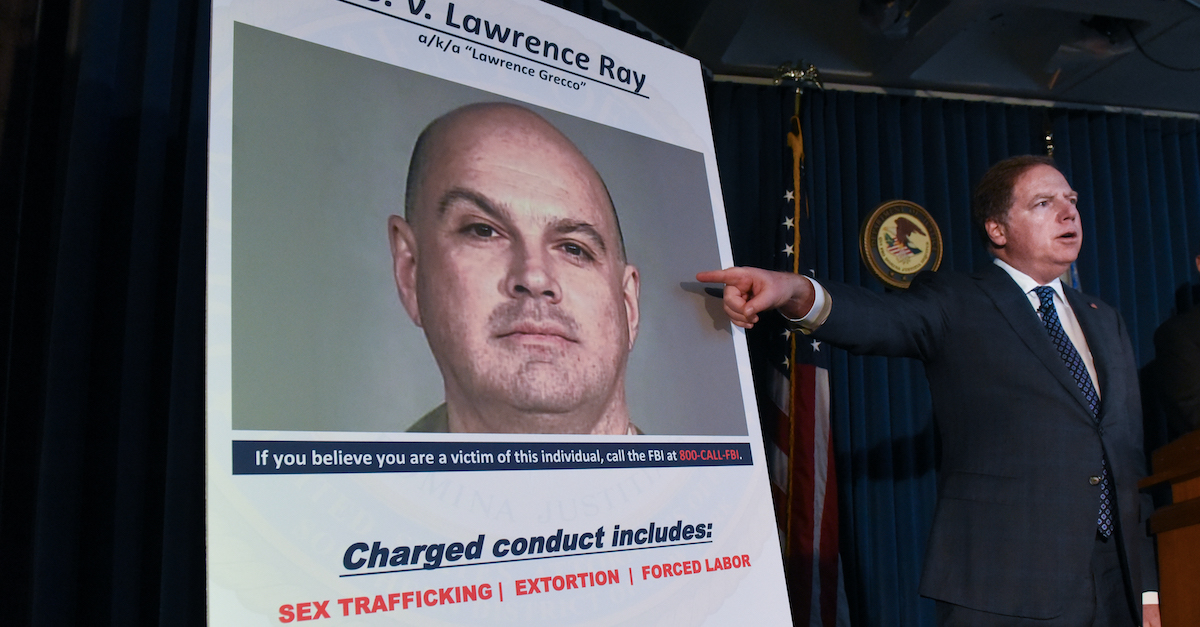 Both covering the trial, Marcus and Walsh marveled at how Ray created much of the evidence used against him. Prosecutors say that Ray coerced students into false confessions, extensively and compulsively documented in videotapes, audio recordings, and written statements now being used against him in court. Ray then allegedly used these confessions to force the students to pay him hundreds of thousands or even millions of dollars, in compensation for what prosecutors call their imagined crimes against him.

“It’s remarkable seeing how much of this evidence the government is relying on is generated by him, and things he even put online,” Marcus noted, adding that Ray appears to be the “architect of his own prosecution here.”

During opening statements, Ray’s defense attorney compared the case to “Alice in Wonderland” and urged the jurors to travel “through the looking glass,” viewing the defendant and the students as a group of “storytellers” rather than victims and participants in a criminal enterprise.

As a story, the Ray case veers toward the sordid and the horrifying. One student, Santos Rosario, testified that Ray put a knife to his genitals, and another, writer Daniel Levin, wrote in his memoir about the cult that Ray squeezed his testicles in a makeshift garrote.

The reporters who brought the story to public attention agreed that Ray’s case contained an element of the surreal.

“You start looking into Larry’s background, and it’s like, you go down all of these increasingly Byzantine relationships he had with genuinely important people, for reasons that are not clear,” Marcus noted. “What was he doing in Russia? How did he meet all of these powerful generals?”

In the 1990s, Ray used to be close friends with ex-New York City Police Commissioner Bernie Kerik and was best man at his wedding. That relationship fell apart after Ray’s prosecution in a mafia-linked securities fraud scheme. Ray later served as an informant against Kerik that in a federal criminal prosecution sidelined the ex-NYPD chief’s career. Since that time, Ray has claimed to be the victim of a sinister payback plot by Kerik’s purported agents.

In fact, Walsh said that Ray refused to speak to Marcus, accusing him of supposed pro-Kerik bias. Ray habitually accused the Sarah Lawrence students of being agents of Kerik.

“So he called me and said he would talk to me, and so I interviewed him on a number of occasions,” Walsh said.

As Walsh recalled the interview, Ray appeared to act just as he did on the videos entered into evidence in his trial, frequently rambling and attempting to exert control over its path.

“He’s not quite as aggressive, but he will just kind of talk about stuff where you have to be like, ‘I just have no idea what you’re talking about,'” Walsh said. “He’s taking you on this journey, and he is not going to deviate from that journey. He is not going to give you time to set the course.”

They said that fact-checking the story required a lot of follow-up conversations, in some pretty surprising corners.

“I mean, literally, you know, Robert De Niro wanted to get on the phone and talk about Larry Ray,” Walsh marveled. “They only met once, and it was 20-something years ago, and yet something about Larry Ray stuck in his head. So, it was a lot of phone calls, a lot of door knocking, and a lot of people saying, ‘I think he knew this general because he sat next to him on a plane. I think he knew Pavel Palazhchenko, Mikhail Gorbachev’s interpreter, because he met him here through this person.”

Photographs show Ray with Kerik, Gorbachev, then-New York City Mayor Rudy Giuliani, and other notables, most of them from the 1990s, predating Ray’s initial securities fraud prosecution. These relationships predated Ray meeting the Sarah Lawrence students through his daughter Talia Ray in 2010.

Weaving together these disparate threads, the authors put together a story that continues to fascinate (and repulse) true-crime and federal court-watchers.

“It was kind of piecing that together, and then eventually these patterns would show or two or three people said the same thing—and we could kind of hone in on something,” Walsh said. “But yet there are still a lot of question marks, more question marks than there are answers.”

Listen to the full podcast, below:

(Screenshots of videos released by DOJ)